Kia among best-performing carmakers in October 2019

Sales reports from key carmakers for the month of October 2019 have been announced; Maruti Suzuki tops the charts yet again. 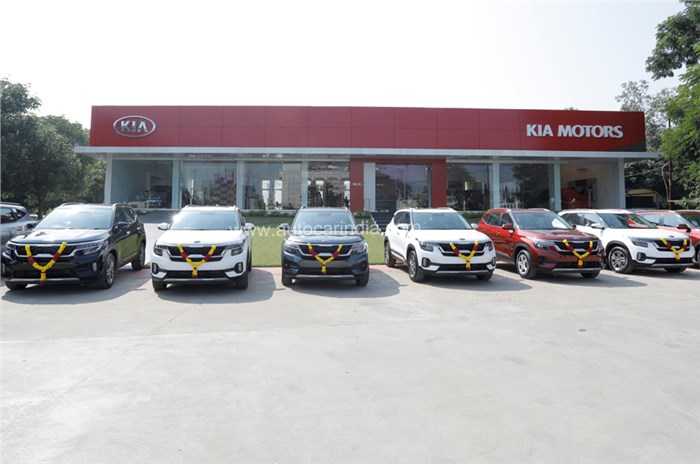 The sales reports for October 2019 from key vehicle manufacturers across segments show a mixed bag of performance, with many settling to observe a positive trend.

If manufacturers across vehicle categories were expecting rocketing sales in October, then they would be a tad disappointed. While some will have to stay content with logging Dhanteras sales records, others will be concerned why their armoury of sales tips and tricks failed to set the festive season on fire. October sales essentially have to be viewed in the background of abject poor year-ago sales, heavy discounting, the Dhanteras-Navratri-Diwali combination in the same month, and the continuation of the country's economic slowdown. Add the wait-and-watch consumer approach to BS6 and what you get is an industry still in the throes of wanting a fix on achieving sustainable growth. Is this October performance sustainable in the future months, which have no festivity attached to them? Is the month-on-month growth in October 2019 real and can the industry hold onto it in the next two months of this year before 2020 opens? Will customers continue to be fickle and will the government announce the much-delayed vehicle scrappage policy?

In a recent press conference, Rajan Wadhera, president, SIAM, had said, "While we have faced all sorts of challenges till now, we have started seeing some green shoots (of recovery), whether coming from the effect of the various measures announced recently by the government or due to the enhanced mood during the festive season."

"Retail sales over the auspicious Navratri period have been quite good for some OEMs. The festive season itself could be the flywheel which will generate the momentum for growth," had said the rather optimistic-sounding president of SIAM.

At this stage, there are a lot of questions but few answers. But here's looking at how the automakers fared this October.

Car and SUV sales show month-on-month growth. Barring the country’s largest carmaker, all others have again posted a negative year-on-year (YoY) growth rate, but, show a considerably improving performance on a month-on-month basis.

Maruti Suzuki India, the country’s largest carmaker, announced total domestic passenger vehicle sales of 1,39,121 units in the month, recording a marginal 2.3 percent growth (October 2018: 1,35,948). The company had also despatched 2,727 units of the Glanza hatchback to its partner Toyota, which takes its total to 1,41,848 units and YoY growth to 4.3 percent. On a month-on-month basis, this is a marked improvement, compared to the 1,10,454 units the company sold in September (+28.42 percent).

According to Vikas Jain, national sales head, Hyundai Motor India, “Hyundai Motor India has again outperformed despite long market slowdown, registering highest cumulative sales of 63,610 units, including exports in the month of October 2019, showcasing customer confidence and trust in brand Hyundai. Our top performing brands added joy to festivities of our customers, with strong performance in a single month. We are confident that Hyundai Motor India would continue to march towards the year end on a positive note, meeting and exceeding our customers’ aspirations.”

UV major Mahindra & Mahindra clocked sales of 18,460 passenger vehicles in the month, registering a 23 percent decline (October 2018: 24,056). In terms of SUV sales, it reported sales of 17,785 units, down 20 percent YoY in October. However, like others, M&M too performed better than September, when it had sold 14,333 units, thus, showing a 29 percent improvement. In a tweet, Pawan Goenka, managing director, M&M, said, “Congratulations to our dealer partners for delivering the highest retail volume for Mahindra last month. I hope the retail momentum in October is an indicator of the sentiment turning positive and will continue in the coming months.”

Tata Motors sold 13,169 units in the domestic market but registering a sharp 28 percent YoY decline (October 2018: 18,290). But, when compared to the 8,193 units sold in September, the company observed a remarkable uptick in its performance (+60.73 percent). According to Mayank Pareek, president, passenger vehicles business unit, Tata Motors, “In line with our new paradigm, focus was on retail. Results have been encouraging with retails at 36 percent more than wholesale. Customer response was positive to festive offers and our new product launches like Harrier Dark edition and Nexon Kraz+. In October, retail sales were the highest in this fiscal, recording a 60 percent increase month-on-month.”

Although Kia Motors is a new entrant to the India market, it is among the few carmakers that have posted consistent growth in sales over the last three months. Kia launched its first and only offering in our market, the Seltos SUV, back in August 2019 – it sold 6,236 units of the model during that month. In September, Kia sold 7,554 units of the SUV, while the month of October saw that figure jump to 12.850 units; registering a massive 70 percent month-on-month growth.

Honda India registered sales of 10,010 units in the month (October 2018: 14,233 / -29.67 percent). The company had sold a total of 9,301 units in September, thus, showing a positive sales trend month-on-month (+7.62 percent). According to Rajesh Goel, SVP and director – sales and marketing, Honda Cars India, “The festive season was rewarding for the auto sector after a prolonged slowdown. The high discounts and other festive offers provided by automakers across the industry resulted in positive consumer sentiment. At Honda, we also saw an increased sales momentum, as compared to last few months, and are hopeful that this trend will continue in the following months.”