The Dutch-branded tyres will be available in sizes of 17-24-inches and will be aimed at the luxury car segment. 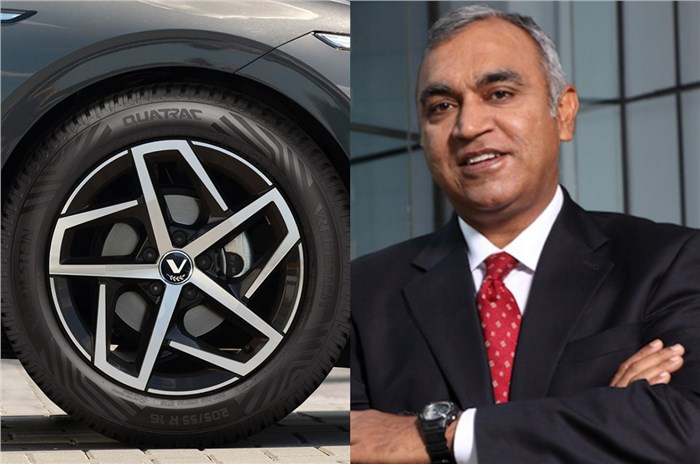 Apollo Tyres is gearing up to extend its range of locally manufactured tyres in the luxury vehicle space with the Vredestein brand in the coming days. “We are bringing in our Dutch brand, Vredestein, and it's going to be launched in India very soon,” confirmed Satish Sharma, President, Asia Pacific, Middle East and Africa, Apollo Tyres, in an interview with Autocar India. He mentioned that the company will leverage the global brand to cater to “the whole market segment of 17-24-inch tyres.”

Vredestein is one of the oldest tyre manufacturers in the world and was bought over by Apollo in 2009. The company introduced the European brand to the Indian market in 2013 by importing a range of tyres for premium and luxury passenger cars. However, the tyre major is looking for a bigger push in the segment this time around, by manufacturing Vredestein products locally.

Explaining the rationale behind the company’s move, Sharma said, “What happened in India was that since 98 or 99 percent of our vehicle park consists of small cars, automakers earlier didn't see sense in developing the supply chain in India to service that 1-1.5 percent of (luxury vehicle) business. They had global supply chains and they just used those to get the limited volumes required in India.”

However, the playing field changed when in June 2020, the Indian government curbed imports by shifting tyres from an open general licence (OGL) to the restricted category. “We are in this whole journey of self-reliance, or Atmanirbharta,” mentioned Sharma.

However, the strategy initially put a lot of stress on the supply of premium tyres, with motorists of high-end cars getting stranded. “Thanks to the regulation, what happened was that you could feel a temporary disruption of supply chain. But this vacuum is going to be filled by everyone producing domestically because they have the technology and the wherewithal. It's no longer a niche, it's a growing business,” said the senior executive.

Commenting on what can be expected from Vredestein in India, he said, “We can go all the way up to 24 inches, with low aspect ratio radials. We even have the technology for run flat tyres.” The Dutch brand will take on the likes of Michelin and Pirelli and cater to premium cars from automakers like Mercedes-Benz, BMW and Audi in India.

“We're going to be launching our tyres in the next few days,” added Sharma.

“The Indian tyre industry is a very matured industry where we make world equivalent, benchmarked products,” Sharma said. However, with the country trailing behind the world in terms of regulations, like emission norms, until now, tyre makers had to face the challenge of greater differences between tyres meant for the Indian and the international markets.

“The technology is there and the R&D investments have been going up. The good thing that regulations, like BS6, do is that they further align us with the global vehicle park,” commented Sharma. This, then, is expected to open up more export opportunities for domestic players like Apollo.

“We could become a good exporting hub out of India, especially with the geopolitics of China. So, we see our exports growing multi-fold,” said the Apollo president.

Moving forward, the company will increase its focus on low rolling resistance tyres, as well as products for the SUV segment, under its Amazer and Apterra sub-brands, respectively. “Not just India, but the larger part of the world is moving towards SUVs and that trend is universal. So, in Apterra, we have found a portfolio which makes a lot of sense not just for India, but also for South Africa, Australia and the big SUV markets, like the Middle East and ASEAN region,” Sharma said. He continued, “We are also looking at Europe and USA in a big way.”

With the limited size of the luxury vehicle park in our market, the company could also look into exporting India-made Vredestein tyres to other countries.

“In the minds of consumers, beyond a certain point, the centre of gravity would shift to multinational brands, rather than Indian brands. So, there was a mind block,” mentioned Sharma.

Brand aspiration is something that Apollo has been trying hard to build over the years, but still there is some work to be done, especially in the premium categories. “The aspirational brand journey needs to be travelled by some of the Indian brands, especially Apollo, given what we have done in the past few years,” he said. He added, “I wouldn’t be boastful enough to say that Apollo has captured the hearts (of Indians) for being an aspirational brand, but we are well set on that course.”

Sharma further commented that the Indian consumer generally looks for a European brand on a luxury vehicle, something that the company will be able to cater to with an international name like Vredestein. This, then, seems to be a well thought out strategy and Apollo expects to benefit from the move as well.

Though Vredestein products will initially be aimed at the aftermarket, the company is also working on supplying to the luxury automakers. “The interest of OEMs is now aligning with the local supply chains even for this segment. We are beginning to see that interest and are hoping to exploit that opportunity,” he said.