Longer than the standard Tiguan that it will replace in India, the AllSpace also adds in a third row of seats; will be offered solely with a petrol engine. 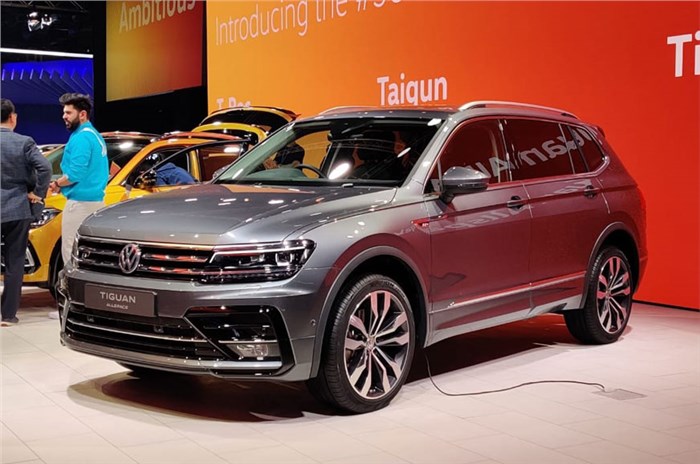 SUVs are going to be big business for Volkswagen in India. While the Taigun concept points to a mass-market midsize SUV that comes in 2021, the existing Tiguan range is also set to see a revamp. The standard-wheelbase, 5-seat version will make way for the longer, 7-seat Tiguan AllSpace soon, and the model is on display at Auto Expo 2020.

Viewed from the front and rear, the Tiguan and AllSpace can’t really be told apart. However, view the AllSpace in profile and you’ll see a much longer SUV. The AllSpace is 215mm longer than the standard Tiguan, with 110mm of the added length at the wheelbase alone. The added length has allowed the fitment of a third row of seats that immediately puts the Tiguan AllSpace at an even keel with its cousin from Skoda, the Kodiaq.

Inside, the basic design of the dashboard is unchanged from the Tiguan, with the advantages of the longer wheelbase best experienced at the rear. With the middle-row seats extended all the way back, there’s a great deal of legroom on offer. Access to the third row, however, is awkward and the knees-up seating position isn’t comfy. The seats are best reserved for occasional use only. With all seats in place, there’s a useable 230 litre of luggage room, which can be expanded to 760 litres by folding the third-row seats down. Folding the second row down enhances luggage carrying capacity to 1,920 litres.

While Volkswagen hasn’t announced the final features list for India, you can expect LED lights, a panoramic sunroof and a sophisticated touchscreen infotainment system to be part of the AllSpace package.

Longer length and third row of seats aside, the Tiguan AllSpace will also differentiate itself from the Tiguan, which has been on sale so far, by its powertrain. The outgoing Tiguan’s 143hp, 2.0-litre diesel engine will make way for a 190hp, 2.0-litre turbo-petrol engine. There will be no diesel engine option on offer in India. The petrol unit  will come mated to a 7-speed dual-clutch automatic transmission.

The Volkswagen Tiguan AllSpace will be brought to India as a CBU, with sales expected to commence by mid-2020. Bookings for the SUV have been opened. Being a full import, the AllSpace will be quite expensive, with prices in the region of Rs 35-40 lakh. The outgoing Tiguan, for reference, retails for Rs 28.15-31.54 lakh (ex-showroom, India).

While not cheap, the Tiguan AllSpace could find takers drawn to the original Tiguan but ones who need the flexibility of a third row of seats.