The Korean brand has received over 24,000 bookings for the all-new Creta during lockdown; over 5,000 units exported in May 2020. 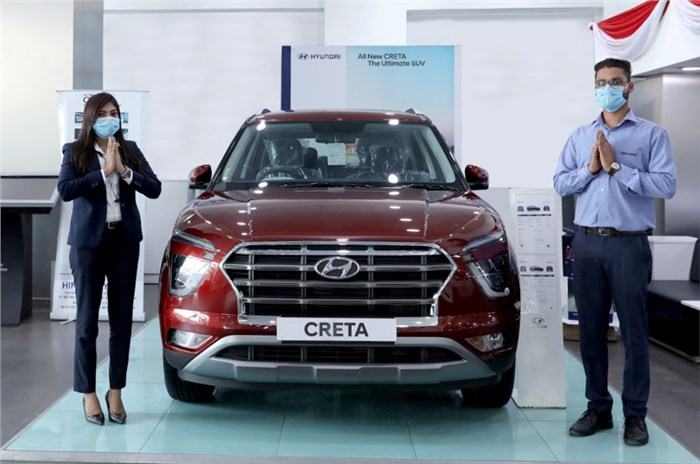 India's No. 2 carmaker by sales volumes, Hyundai Motor India, today reported cumulative wholesale numbers of 12,583 units in the month of May. From the total, domestic sales made up 6,883 units, while 5,700 units were exported. While these figures are better than most carmakers, it is still down on March 2020’s 26,300 units.

During the month of May, the Korean carmaker claims to have received up to 15,000 new bookings through its showrooms and online retail platform – Hyundai Click to Buy. On May 8, it resumed operations at its two plants in Chennai, Tamil Nadu. The company now has over 850 showrooms and 1,000 workshops in operation across the country, which are dealing directly with customers on the ground.

The company said it delivered 11,000 cars last month to customers as various parts of the country started opening up gradually after the complete lock-down due to the coronavirus pandemic.

Hyundai had launched the all-new Creta on March 16 just before announcement of the nationwide lockdown. The first generation of the Hyundai Creta had launched in March 2015 and went on to become a bestseller. The company sold  4,66,839 units till end-January 2020 in the domestic market and exported another 1,93,000 units to the Middle-East, South Africa and Latin American markets.

The second-generation of the midsize SUV seems success-bound again, with the company already receiving 14,000 bookings in less than two weeks between March 3 and March 16. While we had exclusively reported that Creta bookings had crossed the 21,000 mark on May 16, Hyundai has now officially confirmed that it has now received 24,000 bookings; 3,000 more bookings were made in the last two weeks.

During the lockdown, prices for the Hyundai Verna facelift had also been revealed.

Hyundai is facing competition in the form of its sibling Kia Motors India, which saw its Seltos SUV becoming a runaway success soon after its launch in August 2019.