Triumph Rocket 3 GT to be launched on September 10

The Rocket 3 GT has a slightly relaxed riding position, with forward-set foot pegs, a slightly pulled-back handlebar and a lower seat height. 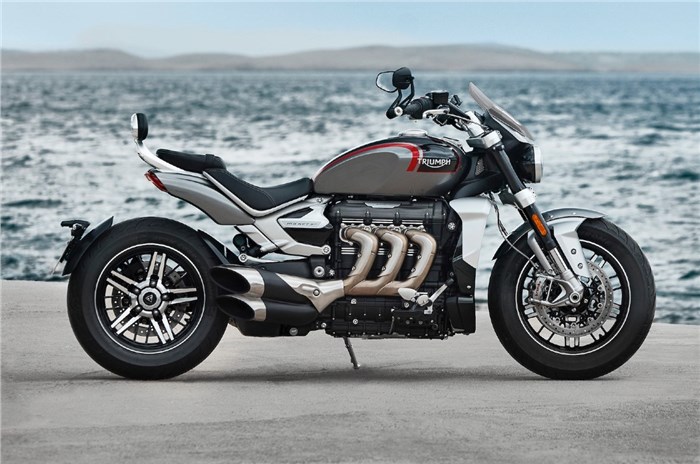 Triumph is set to launch the Rocket 3 GT on September 10, 2020. The GT, as the name suggests, is the cruiser version as opposed to the R that’s the street-oriented roadster already on sale in India.

The Triumph Rocket 3 R was the company’s first BS6-compliant offering in India. It was launched back in December 2019 at Rs 18 lakh. The upcoming Rocket 3 GT, however, is expected to cost slightly more.

The Rocket 3 GT is powered by the same 2,500cc, liquid-cooled engine that produces 167hp at 6,000rpm and a whopping 221Nm of torque at 4,000rpm. The GT also uses an all-aluminium frame, with the engine acting as a stressed member. Suspension duties are taken care of by 47mm, compression and rebound adjustable, Showa USD forks (with 120mm travel) at the front and a monoshock at the rear with a Showa piggyback reservoir and remote adjuster (with 107mm travel).

Braking, meanwhile, is handled by twin 320mm discs at the front with Brembo Stylema four-piston monobloc calipers and a 300mm disc at the rear with Brembo M4.32, four-piston calipers.

The alloy wheel design is the same on both models, except for the chrome accents on the GT.

Triumph Trident to debut in 2021