While the target price for the entry level Triumphs will be under Rs 2 lakh, the brands are working on developing larger capacity bikes as well; none of the bikes that will be launched from 2022 onwards will be sold under the Bajaj name. 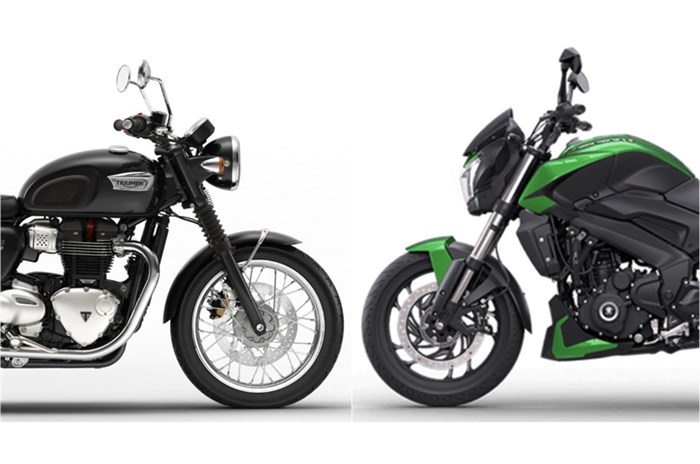 While Bajaj and Triumph had announced a global partnership back in 2017, we’ve now got new info on what that means for the Indian market. At a press conference held today, the brands confirmed that Bajaj-built Triumph-branded motorcycles are expected to have a starting price of under Rs 2 lakh, when they arrive in showrooms in 2022.

Further, the announcement today also confirmed that the brands are working on a number of bikes with capacities ranging from 200cc to 750cc and a new vehicle platform, though none of them will come with a Bajaj badge. Instead all the bikes produced by Bajaj’s Chakan plant under the partnership will be sold under the Triumph brand name. In fact, the bikes will also use Triumph’s ‘heritage’ names, which provides hints that the bikes could be retro-cruisers. Bajaj and Triumph are collaborating on both, the design and the engineering and the Indian brand will produce these bikes for international markets as well.

Speaking at the event, Paul Stroud, Chief Commercial Officer, Triumph Motorcycles confirmed that Bajaj will distribute the Triumphs (of all capacities) in India and certain other markets, while Triumph will sell the upcoming models (built with Bajaj) in global markets.

The entry-level bike with the sub-Rs 2 lakh price tag is most likely to be powered by a 200cc single-cylinder engine.

While Bajaj is mum on exactly what types of bikes we’ll see come out from the alliance, we could see sport nakeds that’ll rival the likes of the KTM Dukes or even retro-cruisers to take on Royal Enfield and Jawa. There is even the possibility of the company making a lower-capacity adventure motorcycle however, it remains to be seen which bikes will be revealed.