Based on the 790 Duke, it features long travel suspension, wire-spoke wheels; expected to launch at EICMA or Intermot Cologne. 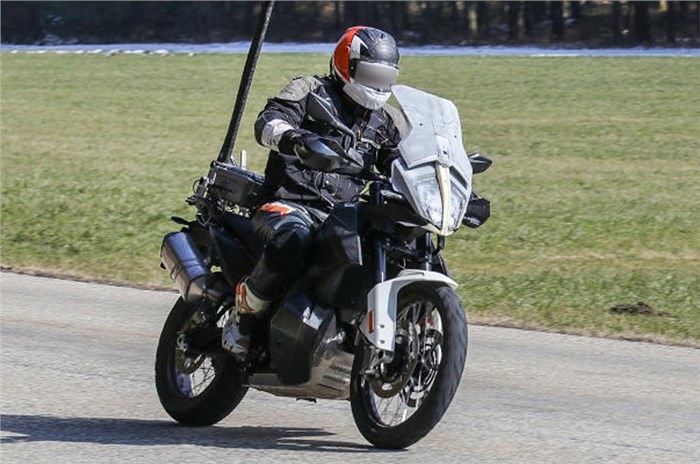 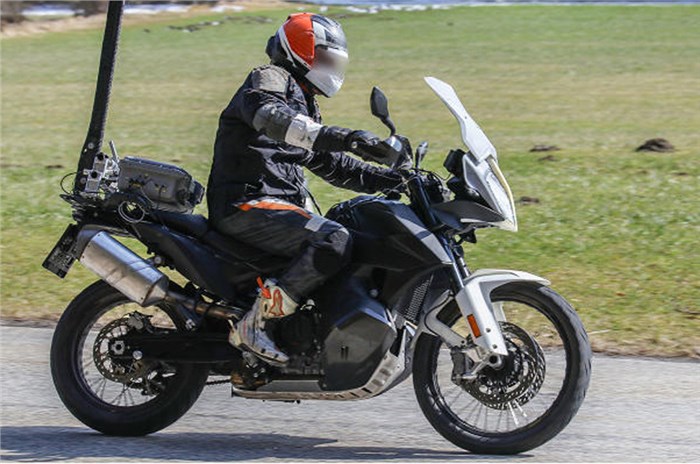 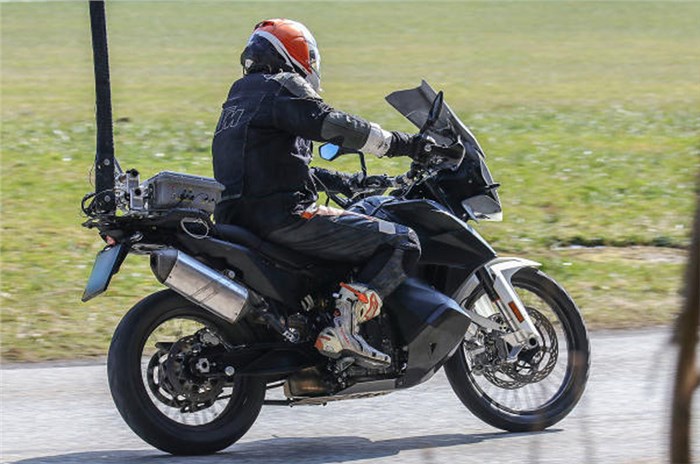 The KTM 790 Adventure was first revealed in prototype form at EICMA 2017 as an adventure bike that will sit below the large 1090 and 1290 Adventures. A test mule was then spotted in February, an indicator of the swift progress being made by KTM to get this bike ready for an official launch. Now, a revised prototype has been spied testing once again, in a much more production-ready guise, with various modifications.

As we saw with the original concept, the motorcycle features wire-spoke wheels measuring 21 inches at the front and 18 inches at the rear. Long travel suspension comes in the form of an upside-down telescopic fork at the front and a monoshock at the rear. The monoshock is mounted directly to the frame, without any linkages. Braking hardware consists of dual discs up front and a single disc at the rear, with callipers coming from Spanish manufacturer J. Juan, a specialist in motocross, trials and enduro braking systems. The 790 Duke also features a similar set-up.

The powerplant will be shared with the 790 Duke, which was the first motorcycle to run KTM’s brand-new LC8c 799cc parallel-twin motor. In the Duke, this engine is claimed to produce 105hp and 87Nm of torque at 8,000rpm. It is likely that KTM will alter this engine's state of tune for the 790 Adventure, with a stronger focus on low-end tractability.

However, some noticeable changes have been made to the motorcycle since it was spotted in February. The new prototype features a much larger front screen and a redesigned front fender, as well. While the February test mule featured a beak-like fender mounted just under the headlight, the new prototype has a more traditional fork-mounted fender, close to the front tyre. The spied motorcycle continues to feature the unusual, bulbous bodywork structure on either side of the engine bay, ahead of the rider’s shins. It is still unclear whether these are low-slung fuel tank extensions, stowage compartments or some sort of crash protection.

With the prototype looking quite close to being production-ready, we can expect an official reveal later this year, either at the EICMA or the Intermot Cologne motor shows. Once launched, this motorcycle will go up against the likes of the BMW F 850 GS, the Triumph Tiger 800 XC range, and the Honda Africa Twin. It will also be KTM’s smallest ADV motorcycle till the highly anticipated 390 Adventure breaks cover. We expect to see a 390 Adventure concept sometime this year, as well.