What appears to be a fully faired version of the 125 Duke has been spotted testing, with a few changes over the internationally sold bike. 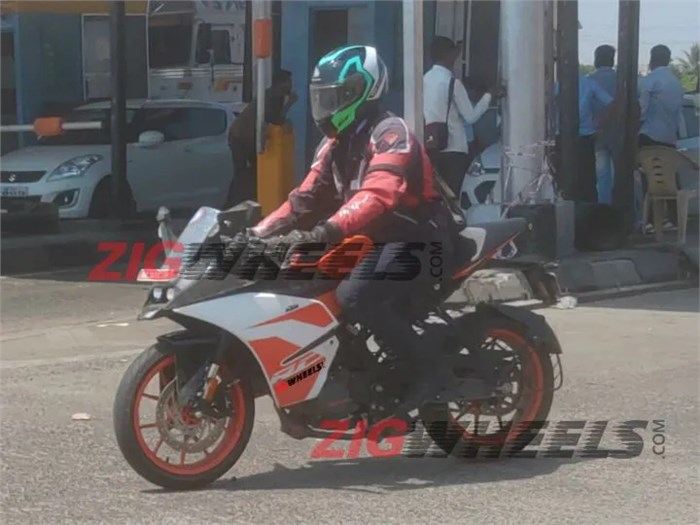 Just months after the KTM 125 Duke was launched in India, it appears that there’s another model lined-up for a launch in the coming few months. What appears to be the KTM RC 125 was spotted testing earlier this week. The RC series in KTM’s portfolio of motorcycles consists of fully-faired versions of a few of their ‘naked’ counterparts.

KTM’s RC 125 isn’t a new model, with the bike already in sale in certain international markets. And just like on the India-spec KTM 125 Duke, it appears that the RC 125 too, will receive a few changes when sold in the country. For starters, the test mule does not appear to have a side-slung exhaust as seen on the international-spec variant (or the RC 390 in India). Instead, it uses an underbelly system. Apart from that, the RC 125 looks almost identical to the RC 200. The dual front headlights, slim tank and a multi-layered fairing are all reminiscent of the RC lineage. Where it does differentiate itself is with its colour scheme. The bike seen testing is sporting a bright-orange tank, and the fairing also carries an inverted colour scheme to the international bike.

When launched, the KTM 125 Duke and RC 125 will most likely share much of their mechanicals – like the 124.7cc, single-cylinder, DOHC, liquid-cooled motor that produces 14.5hp at 9,250rpm and 12Nm of torque at 8,000rpm. They will also mostly be equipped with a 43mm USD fork and an adjustable monoshock. Braking hardware on the Duke consists of a 300mm single-disc brake at the front and a 230mm unit at the rear, which the RC will also get, along with single-channel ABS.

The RC 125 in the pictures appears to be in production-ready form, barring the lack of the lower fairing towards the front of the motorcycle. The current RC 200 is priced at Rs 1.88 lakh, while the 200 Duke carries a price tag of Rs 1.6 lakh. Considering that the differences between the two motorcycles is more or less what will differentiate the RC 125 and the 125 Duke, we expect the RC 125 to be priced around Rs 1.45 to 1.5 lakh mark (the 125 Duke costs Rs 1.25 lakh). However, given that the similar, yet much more powerful Yamaha R15 costs Rs 1.39 lakh, KTM might look at a more aggressive pricing strategy for the baby RC.