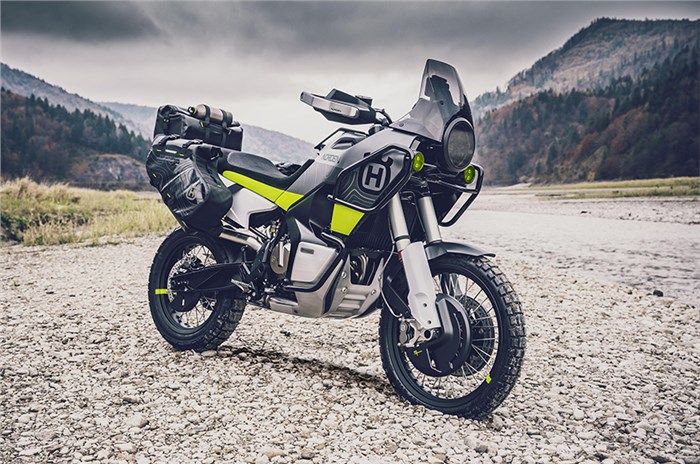 Apart from these bikes that will eventually make their way to the streets, Husqvarna also had on display its 2020 Moto 3 machine.

A couple months ago, it was rumoured that Husqvarna was working on larger displacement Svartpilen and Vitpilen models, with the former also being spied testing shortly after. It turns out, the duo aren’t the only motorcycles that will feature a big-bore twin-cylinder engine! The Swedish manufacturer unveiled an all-new concept called the 901 Norden, and from the looks of it, it certainly does look promising.

The 901 Norden looks like a hardcore adventure motorcycle and seems to be derived from KTM’s 790 Adventure. Since it is still a concept, very little is known of the motorcycle apart from the fact that it will be powered by a 889.5cc parallel-twin engine and will feature a 21-inch front wheel and 18-inch rear wheel. The suspension system, meanwhile, will be sourced from WP.

What we can see from the images is that the Norden seems very well equipped to tackle long days on the saddle, treading off the beaten path. Knobby tyres, spoked wheels, tall suspension and ample ground clearance will aid its off-road intentions, while the saddle bags and knuckle guards might be offered as extras. There’s also an interesting looking dual-TFT display. Visually, the 901 Norden looks muscular and imposing, with handsome lines similar to the design language followed on the Svartpilen and Vitpilen. Only time will tell how much of the hardware and kit will make its way to the production-ready bike; we’ll update this space as soon as details are out.

Apart from the concept, the Husqvarna stall also housed the 2020 Svartpilen 401 and the Vitpilen 401. The 401 twins receive minor updates in the form of new colour schemes and a 40mm longer subframe, and co-incidentally a longer seat. A Svartpilen 401 prototype spotted testing in the country also revealed certain modifications for the Indian market – the camouflaged motorcycle caught testing was seen running on alloy wheels sourced from the KTM 390 Duke, unlike the spoke wheels on the international-spec bike. The prototype sported grab rails as well, which have been mandatory for motorcycles sold in India.

At least one of the 401 motorcycles is expected to launch in India next month at India Bike Week (IBW). Stay tuned for updates!