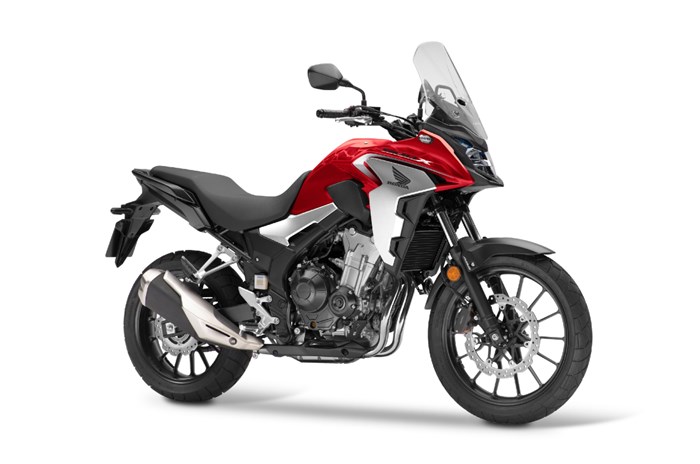 Powering it is a 471cc, parallel-twin, liquid-cooled motor that produces 47.5hp and 43.2Nm of torque. These numbers are quite similar to that of the made-in-India KTM 390 Adventure, which costs a lot less. That said, there’s always an advantage with its extra cubic capacity and two cylinders. It translates to a much calmer motor – especially at cruising speeds – and additionally, better engine refinement. We hope to put this to the test as soon as we get the chance. This engine also comes paired to a 6-speed gearbox and a slipper clutch.

The CB500X rides on a conventional 41mm fork and a preload-adjustable monoshock, offering a ground clearance of 181mm. It gets 19-inch front and 17-inch rear alloy wheels. The seat height, meanwhile, is 830mm.

Braking is handled by a 310mm disc at the front and a 240mm disc at the rear. These discs are drilled petal-type units. Along with dual-channel ABS, the CB500X also gets the Emergency Stop Signal (ESS) feature that detects sudden braking and automatically activates the front and rear hazard lights, which flash to warn nearby vehicles.

While Honda hasn't revealed the kerb weight, we expect it to be around 197kg.

Lighting on the CB500X is handled by LEDs all around. It also features Honda Ignition Security System (HISS) theft deterrent. The negative LCD also shows information like the gear position, engine temperature and other basic information. Lastly, the X also gets a tall windscreen that’s expected to provide ample wind protection.

At Rs 6.87 lakh, it sits between the Benelli TRK 502 (Rs 4.8 lakh) and the Suzuki V-Strom 650 XT (Rs 8.84 lakh). The CB500X is available in two colours – Grand Prix Red and Matte Gunpowder Black Metallic. Bookings are open from today at Honda’s BigWing dealers across India.