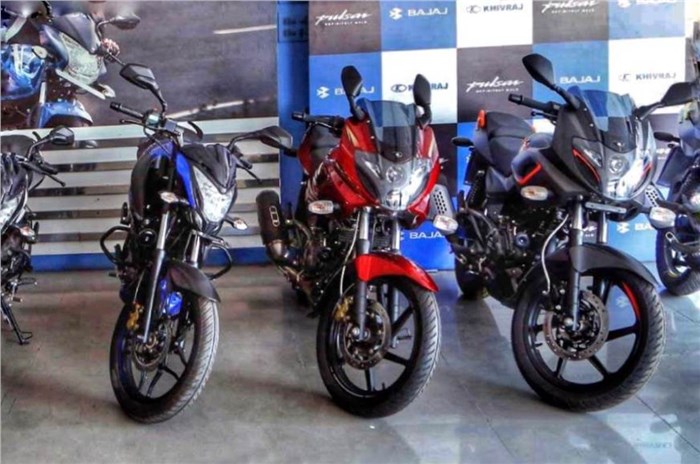 The two-wheeler industry seems to be making a strong comeback with the easing of lockdown restrictions. Consumer demand has been on a constant rise and the ongoing festive season is shaping up to witness a growth in sales. However, many in the industry, including two-wheeler maker Bajaj, remain concerned about the growth sustaining in the subsequent months. Speaking to Autocar India, Rakesh Sharma, Executive Director, Bajaj Auto, highlighted the urgent need for a government intervention in order to maintain the sales recovery after the festive season.

Though the senior Bajaj executive acknowledged the government’s current resource crunch, he opined that there was a dire need for measures to revive the auto industry. One of the main suggestions was a reduction in GST.

All two-wheelers in the country fall in the 28 percent GST category, with those having an engine capacity over 350cc attracting an additional 3 percent cess. “If we reduce GST from 28 to 18 percent, the consumer will respond and the rise in volumes, coupled with higher prices of BS6 vehicles, will mitigate the loss (of government revenue),” said Sharma. He added, “Our penetration of two-wheelers in the industry is still very low compared to Southeast Asian countries with similar per-capita GDP. If we reduce the GST, it will increase the demand.”

Moreover, with scooters and bikes being the most affordable form of personal transport, something which has become increasingly important in these times of social distancing, they need to be viewed as essential products, he said. In the past, even Finance Minister, Nirmala Sitharaman, has stated that two-wheelers shouldn’t be considered as sin goods and consequently, they do justify a tax cut. However, no concrete steps have been taken in this direction yet.

Reduction in export incentives a point of concern

The Directorate General of Foreign Trade, under the Ministry of Commerce and Industry, recently reduced the limit on subsidies and incentives for exports that vehicle manufacturers are stipulated to receive under the current policy framework. This is expected to have an adverse impact on manufacturers like Bajaj which are major exporters.

Bajaj is the leading two-wheeler exporter in the country. The company exported 6,28,219 units in April-September 2020, which is 47 percent of its total production for the period and about two-and-a-half times the export volumes of its next closest competitor, TVS.

Commenting on the government’s latest move, Sharma said, “We want to encourage exports, but suddenly, two percent (subsidy) is gone in a sweep. Two percent may look very small, but companies like ours have programmes to shave off even one percent because we are fighting the Chinese in many markets.”

Regulations need to be more comprehensive

In addition to the government’s economic policies, another aspect that has put considerable strain on the auto industry is the bevy of new regulations which have been implemented in a short span of time. These new norms, regarding insurance, safety and emissions, have resulted in a sharp rise in vehicle costs and hurt demand. Moreover, many have also called out the government’s moves to be bordering on “over-regulation”.

Weighing in on the issue, Sharma commented, “We have hastened regulations which appear to be overkill.” Questioning the efficacy of some of the norms, he said, “Even some developed nations don't have ABS with 150cc bikes which are essentially commuter bikes running at 40-60kph. Do they need ABS and does that have to drive up cost? Such things have been adding bit by bit (to the prices).”

Clearly, the regulatory environment needs to be more comprehensive, by factoring in the capabilities of the industry and affordability of consumers, to ensure a responsible, yet sustained, growth of the auto sector.

Passenger vehicles at back of queue for government relief