The Benelli Imperiale 400 is the first retro-styled motorcycle in the company’s Indian portfolio; set to rival the likes of the Royal Enfield Classic. 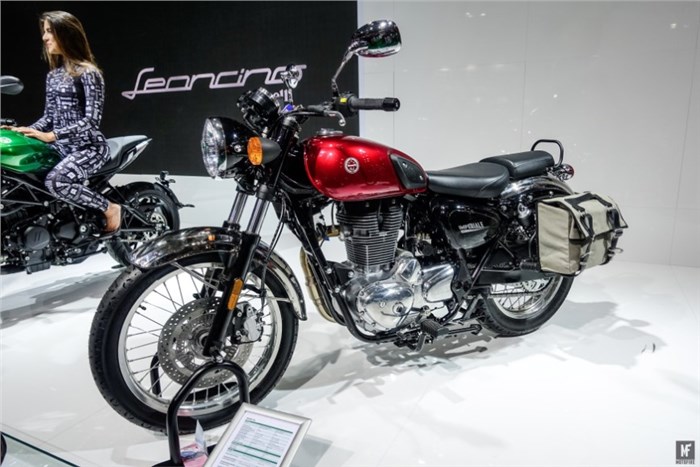 Benelli India is all set to launch the Imperiale 400 in India around the first half of October 2019. The retro-styled bike was unveiled at EICMA 2017 and will finally make it to our shores as Benelli’s new partner in India, Adishwar Auto Ride, has decided to go all out with its new bike launches. The company has already launched the Benelli TRK 502 and TRK 502X earlier in the year, following which, it introduced the Leoncino 500.

The Benelli Imperiale will be the first retro-styled motorcycle in the company’s Indian portfolio – it features a simple design and generous dollops of chrome. Other design highlights include split seats, a twin-pod instrument cluster and pea-shooter type exhaust.

The Benelli Imperiale 400 is powered by a single-cylinder, air-cooled 373.5cc engine that makes 20.4hp at 5,500rpm and 28Nm at 3,500rpm.  As reported earlier, we’ve learned that Benelli is developing a BS6-compliant engine, which will power the Imperiale when it’ll go on sale in India. The company is also looking at localising a few components to ensure the Imperiale is priced competitively.  It is possible we could see components like the wheels, tyres, brakes and electrical systems coming from Indian vendors.

The Benelli Imperiale 400 features a 41mm telescopic fork and twin shock absorbers. Braking is taken care of by a 300mm front disc and a 240mm rear disc.

The Benelli Imperiale 400 will go up against the Royal Enfield Classic series; likely the Classic 500, which is priced at Rs 1.54 lakh (ex-showroom, Chennai). We will be reviewing the Imperiale in the last week of October and will let you know what it is like to ride soon after. Stay tuned.