The Benelli Imperiale will take on motorcycles from Royal Enfield and Jawa. 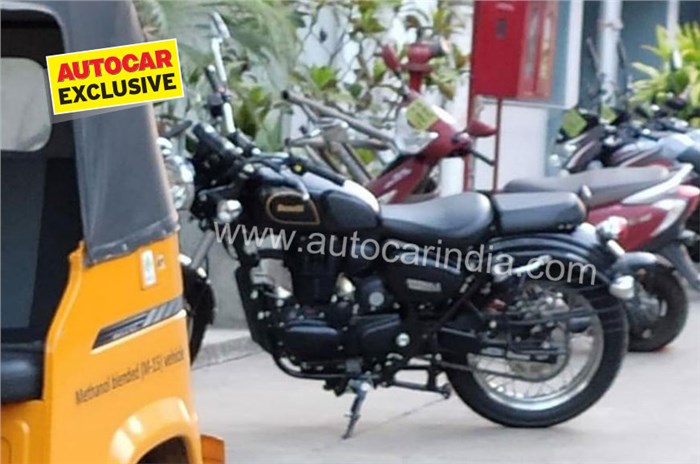 Benelli’s upcoming Imperiale was first showcased at EICMA 2017 and it drew a lot of attention, especially from the Indian market. Not long after, Benelli confirmed that it would launch the motorcycle in India. We now have the first image of the India-spec motorcycle that was spotted while on test near ARAI in Pune.

The Imperiale seen in the image appears almost identical to the international-spec model. It features the same colour gloss black colour scheme with golden-coloured highlights. Equipment, like the body panels, seats, taillights and even the wheels appear the same as the global Imperiale 400 model. Smaller elements like the mirrors, turn indicators and instrument cluster also look unchanged. The only visual difference on the Benelli is the addition of the mandatory saree guard.

The Imperiale 400 was recently in the news as it was going to be the first product from Benelli that is going to benefit from a significant level of localisation. At present, Benelli’s offerings have been coming in as CKD kits, which are manufactured at the Benelli QJ factory in Wenling, China and assembled in the facility set up by AARI in Telangana.

The 400 was unveiled with a Euro-IV-compliant motor, but we learnt that Benelli is currently developing a Euro-V/BS-VI compliant version of this engine, which is the unit the bike will have when it goes on sale in India. The single-cylinder, air-cooled engine, in its current form, makes 20.4hp at 5,500rpm and 28Nm at 3,500rpm.

Suspension on this Benelli, is taken care of by a 41mm telescopic fork and twin shock absorbers. Stopping power, meanwhile, comes from a 300mm front disc and a 240mm rear disc.

The Benelli Imperiale 400 is expected to recieve a significant amount of localisation. Even soit will be hard to match the price of the fully made-in-India Royal Enfield Classic 350 and Jawa Forty Two, and a price tag of Rs 2 lakh plus (more on the lines on the Classic 500) is a realistic expectation. We believe this motorcycle will launch in India by end 2019 at the earliest, but more likely in early 2020.