While TVS won’t compete in the 2021 Dakar rally as a factory outfit, it will sponsor Harith Noah, who will participate as a privateer with Sherco. 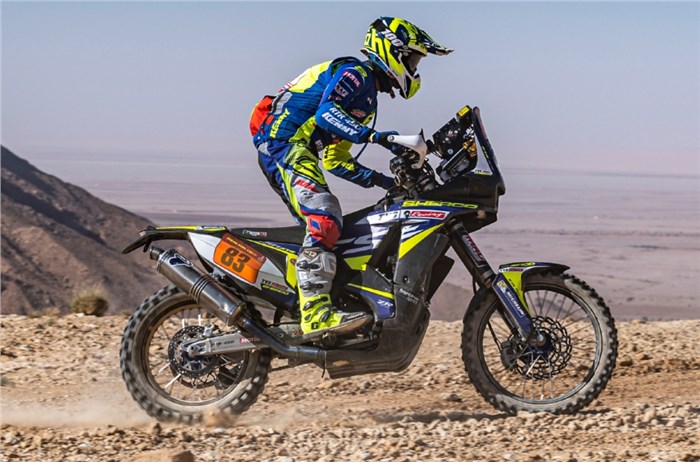 TVS Racing – the racing arm of TVS Motor Company – has confirmed it won’t be participating in the upcoming 2021 Dakar rally as a factory team. Instead, the company will sponsor factory rider Harith Noah, who will compete in the event as a privateer.

In 2015, TVS had become the first Indian team to compete in the Dakar rally. Since then, the outfit has competed in the grueling endurance event for six consecutive years, from 2015 to 2020. However, just days before the 2021 edition of the event kicks off on January 3, the company has announced it won’t compete in the rally this year as a factory team.

Indian rider Harith Noah, who is part of TVS’ factory racing squad, will instead join the Sherco Rally Factory Team as a privateer entry. He, along with Sherco riders Lorenzo Santolino and Rui Goncalves ,will ride the Sherco TVS RTR 450 Rally motorcycle, but TVS won’t provide any technical support on ground.

An official statement from TVS says, ‘TVS Racing, the factory racing team of TVS Motor Company, will not be participating in Dakar Rally 2021. Harith Noah, TVS Racing factory rider, will participate as a privateer in the Dakar Rally with Sherco Rally Factory Team and will be sponsored by TVS Racing. He will ride the Sherco TVS RTR 450 Rally motorcycle.  We would like to wish Harith and Sherco Factory team racers, technical team and support staff the very best for the Dakar Rally.”

Harith Noah had made his Dakar rally debut earlier this year with TVS. He couldn’t qualify for an overall rank following his Stage 3 retirement, but his impressive performances in the subsequent stages were a firm display of his potential. He continued to improve his stage results as the rally progressed, with his best finish of 25th place coming in the penultimate stage.

Spotlight on TVS and Sherco’s partnership

TVS hasn’t revealed any details regarding why it won’t be competing in the 2021 Dakar rally, but the decision certainly brings into question its relationship with French motorcycle manufacturer Sherco.

Together, the two companies have participated in six editions of the Dakar Rally, along with other international events such as the Rally of Morocco, PanAfrica rally, Baja Aragon and Merzouga rally. The upcoming Dakar rally, however, will see Sherco operate its own factory outfit without any support from TVS. It remains to be seen if the partnership between the two will continue for future events.

TVS pulling out of the Dakar rally will leave Hero MotoSports as the only Indian team to compete in the event.

The 2021 Dakar Rally will be the second edition of the event held entirely in Saudi Arabia, largely due to COVID-19-related travel restrictions. The rally will flag off on January 3 in Jeddah and cover varied terrain across the region before concluding in the same city on January 15.

The route itself will be entirely new, and according to organisers, a lot more challenging compared to the 2020 edition. Participants will have to traverse a total of 7,646km, and 295 vehicles will compete across all classes – the lowest participation figure since the 1997 Dakar rally.

The 2021 edition will also see the introduction of digital roadbooks along with a host of rule changes to improve safety. You can head here for the complete breakdown of the new rules for the 2021 Dakar rally.