CS Santosh, Joaquim Rodrigues and Sebastian Buhler will compete in the 2021 Dakar Rally for Hero MotoSports. 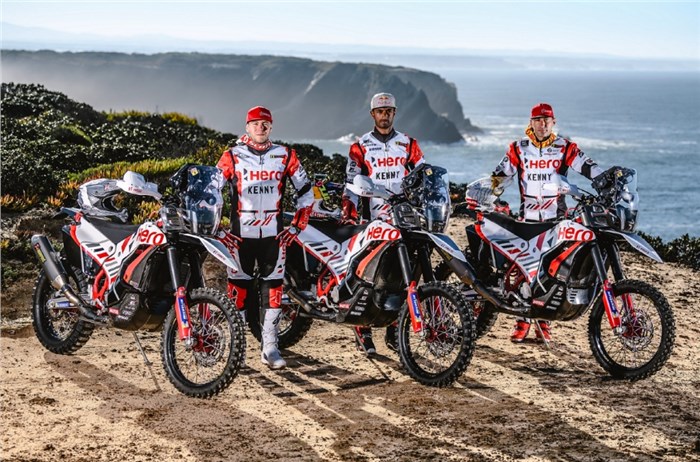 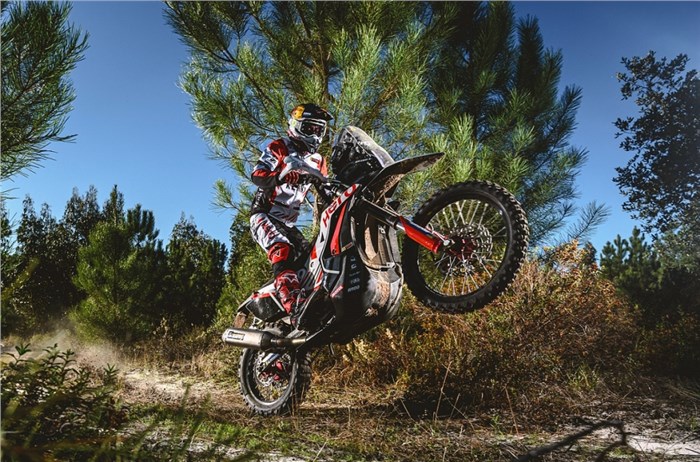 Hero MotoSports has revealed its updated Hero 450 Rally bike for next month’s 2021 Dakar Rally. The team has also confirmed its rider line-up, which will comprise Joaquim Rodrigues, CS Santosh and Sebastian Buhler, all of whom were part of Hero MotoSports in the 2020 Dakar Rally too.

Wolfgang Fischer, team manager of Hero MotoSports Team Rally, has labelled the Hero 450 Rally as an evolution of its predecessor. The bike features an all-new 450cc engine, developed especially for rallying, and the team claims it offers improved top speed and acceleration.

A number of changes have been made on the chassis as well, along with a more voluminous fuel tank, improved suspension and cooling system. Hero has also maximised the centre of gravity at the lowest point of the bike for better handling and stability. The team believes all these changes will ensure the new bike can juggle the dual roles of covering long strides at a heightened pace.

The 2020 Dakar Rally turned out to be a sombre affair for Hero MotoSports, with the team withdrawing from the event following the tragic demise of its star rider Paulo Gonçalves. Fischer acknowledged that it’s going to be an emotional return to the event, but the whole team is determined to put on a good show to honour Gonçalves.

“This is an emotional return for us at Dakar after the tragic event earlier this year. We are determined to put on a good show. While we were away from racing for quite some time due to the pandemic, we utilised the time to develop the new bike and conduct thorough testing sessions with our riders, thus, keeping the team engaged and motivated in the most challenging times,” he said.

With COVID-19 disrupting motorsport activity around the world for several months, the 2020 Andalucia Rally and BAJA Portalegre Rally have been the only official events the team has competed in this year. While admitting that the lack of competitive outings adds another challenge in the run up to Dakar, CS Santosh also believes that the time off during the pandemic helped the team really focus on refining its new bike.

“This has been an exceptional year with limited races and opportunities to train, yet we are satisfied with the preparations that we underwent ahead of Dakar Rally. I have tried to make the most of the situation and used this time to train hard and help the team in the development of our new bike. The new bike offers great performance and manoeuvrability, so I am really excited to ride it at the Dakar,” he added.

The 2021 Dakar Rally will be the second edition of the event held entirely in Saudi Arabia, largely due to COVID-19-related travel restrictions. The rally will flag off on January 3 in Jeddah, run through varied terrain before concluding in the same city on January 15.

The route itself will be entirely new and a lot more challenging, compared to the 2020 edition. Participants will have to traverse a total of 7,646km and 295 vehicles have entered across all the classes – the lowest since the 1997 Dakar Rally.

A major rule change for the 2021 Dakar Rally will be the introduction of digital roadbooks, which will be handed out to competitors just 10 minutes (for cars, trucks and SSV) or 20 minutes (for motorcycles) before the start of each stage. These roadbooks will also give aural warnings.

This year’s Dakar Rally unfortunately saw two riders – Gonçalves and Edwin Straver – tragically lose their lives. With that in mind, the event will be introducing some key measures to ensure the safety of competitors. This includes mandatory airbag vests for all bike and quad riders, as well as a 90kph speed limit in hazardous sectors categorised as ‘slow zones’.

You can head here for the complete breakdown of the new rules for the 2021 Dakar Rally.