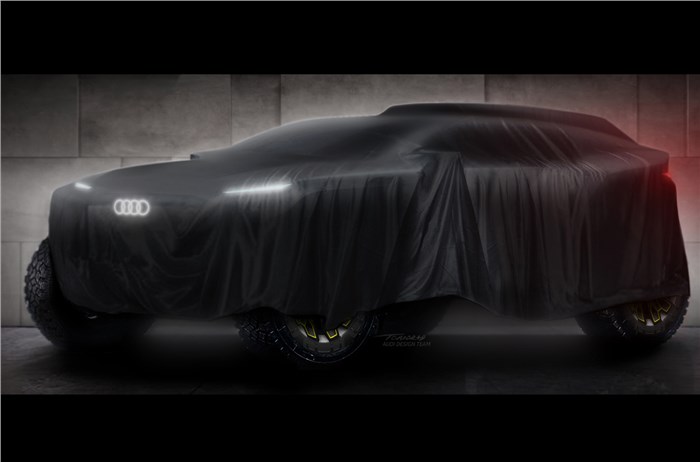 Audi will wrap up its Formula E programme, with cross-country rallying set to spearhead its factory motorsport efforts.

Audi is set to make its landmark return to the world of rallying with an entry into the 2022 Dakar Rally. However, a return to rallying will come at the cost of its Formula E project, with Audi confirming it will pull out of the all-electric racing championship at the end of 2021 season.

Technical details of the new Dakar racer remain under wraps, as does most of its final design, but it will take its power from an electric motor mated to a high-voltage battery, with a turbocharged petrol engine serving as a "highly efficient energy converter".

In essence, the combustion engine will act as a range-extender device, topping up the battery pack as required while the race is in progress. Audi claims it will be the first "viable alternative-drive concept" fielded in the 42-year-old competition.

The 2022 rally will mark the first time that a factory Audi team has competed off-road since Walter Röhrl claimed victory at the 1987 Pikes Peak International Hill Climb in a Quattro S1 E2.

In line with the German company's ambition for cross-country rallying to "spearhead" its factory motorsport efforts, it will wrap up its Formula E programme. Audi has participated in every single season of the electric single-seater series since its inception in 2014, even taking home the title in 2018.

The Dakar Rally represents "the next step in electrified motorsport," said chairman of the board of management Markus Duesmann, with the event's extreme terrain and weather conditions providing "a perfect test laboratory" for future drivetrain solutions.

Last week, Audi revealed its e-tron FE07 2021 Formula E racer, which features a new powertrain developed completely in-house for the first time, replacing a unit that had been developed with technology partner Schaeffler.  Although Audi will shutter its factory team, the powertrain will continue to be available for use by other outfits.

It has also been confirmed that Audi is "intensively preparing" an entry into the new top-flight Le Mans Daytona Hybrid (LMDh) hypercar class of the World Endurance Championship. No date for the company's first race has been given, but manufacturers including Toyota and Peugeot are signed up to enter the category for the 2022 race, with Lamborghini and Porsche also rumoured to be considering an entry.

Audi Sport boss Julius Seebach said: "We have our customers’ wishes in mind as much as the company’s future strategy, which is clearly focused on electrification and carbon-neutral mobility.

"The most important message for our fans is that motorsport will continue to play an important role at Audi.”