With Valentino Rossi joining Franco Morbidelli, Petronas Yamaha SRT has its most competitive and high-profile rider line-up yet. 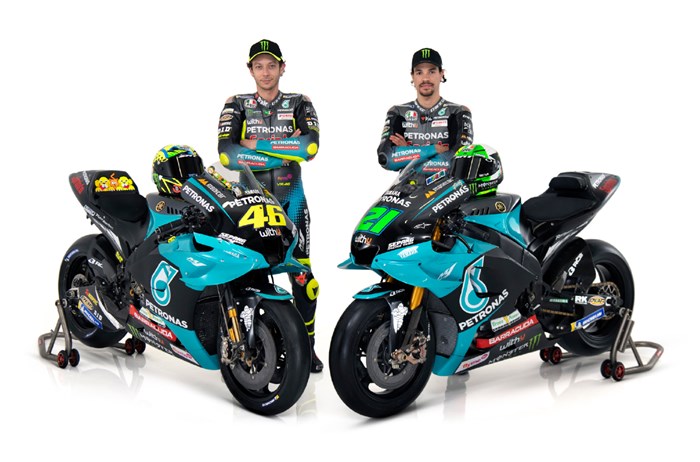 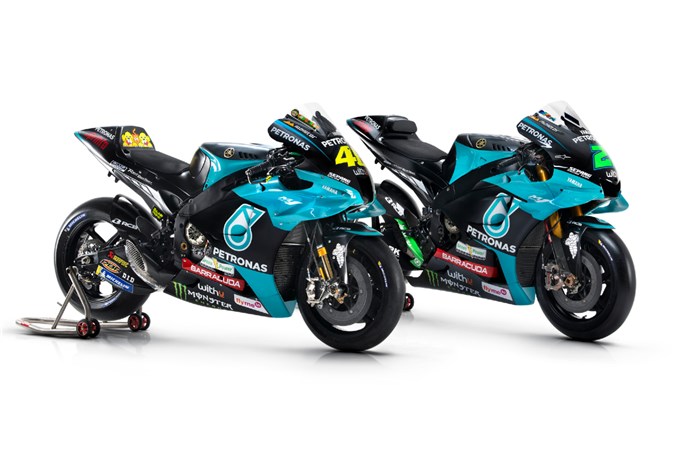 Petronas Yamaha Sepang Racing Team (SRT) officially unveiled its latest challengers and livery for the upcoming 2021 MotoGP season during a virtual launch. This year will see seven-time MotoGP world champion Valentino Rossi join the team alongside Franco Morbidelli. And on the back of an incredible 2020 season, the pressure is definitely on for the satellite Yamaha squad to deliver the results.

In light of the COVID-19 pandemic, MotoGP decided to introduce a host of cost-saving measures for 2021. As a result, this year’s bikes will largely be carried over from 2020 since engine development is frozen. Non-concession manufacturers will be allowed to introduce one aerodynamic development during the season. So, it’s not all that surprising that the latest Petronas Yamaha SRT YZR-M1 looks largely unchanged. As for the livery, the most obvious change is the addition of Rossi’s iconic dayglo yellow to the front of his bike.

While Morbidelli will be using the older A-spec YZR-M1, Rossi has full factory support from Yamaha, so he’ll be using the same 2021-spec bike as Fabio Quartararo and Maverick Vinales. However, Petronas Yamha SRT Team Principal, Razlan Razali, says Morbidelli’s bike will be updated to some extent this year.

"We are looking forward to the season ahead, eager to give Franco and Valentino the best opportunity. For Franco, it’s a fabulous opportunity to achieve even better things than his stellar season in 2020 and, for Valentino, we’re hoping a new team will give him the best opportunities to harness his talent and expertise,” Razali added.

Yamaha’s decision to sign Fabio Quartararo early last year cast a shadow of doubt over Rossi’s MotoGP future. But after some careful consideration, he decided he wanted to continue racing in the championship and signed a one-year deal with Petronas Yamaha SRT. The move also gives him the chance to have close friend and VR46 Academy (Rossi’s own riders academy) graduate Morbidelli as a teammate.

After encountering a series of crashes and battling COVID-19, Rossi ended the 2020 season in a career-worst 15th place. Having not won a race since 2017, he will be hoping this latest chapter in his career will see him return to top form. He’s only signed a one-year deal, so his performance this season will play a crucial role in whether he decides to continue racing beyond 2021.

“I’m very proud to be part of the Petronas Yamaha Sepang Racing Team. It’s a new challenge for me. This is a very young team, but in the last two years they have already been really competitive. I’m happy to see my new bike for this year and I really like the colours of the livery, leathers, helmet, etc. It looks awesome. My targets for 2021 is to be competitive, fight to win races, fight to achieve podiums and also fight for a good position in the World Championship standings at the end of the season,” said Rossi.

Despite competing in the premier class for just two years, Petronas Yamaha SRT has on several occasions challenged the established order in MotoGP. They’ve taken the Independent Team titles for two years running.

In fact, the team even beat out the factory Yamaha squad last year to finish second overall after racking up six wins and eight podium finishes. Morbidelli also finished as the runner-up in the riders’ championship, losing out to Suzuki’s Joan Mir.

“I know it’s hard and difficult because last year we were quite fast and we had great races and achieved great results. Nevertheless, we will have to try to improve compared with 2020, so that’s my aim, try to be better year after year."