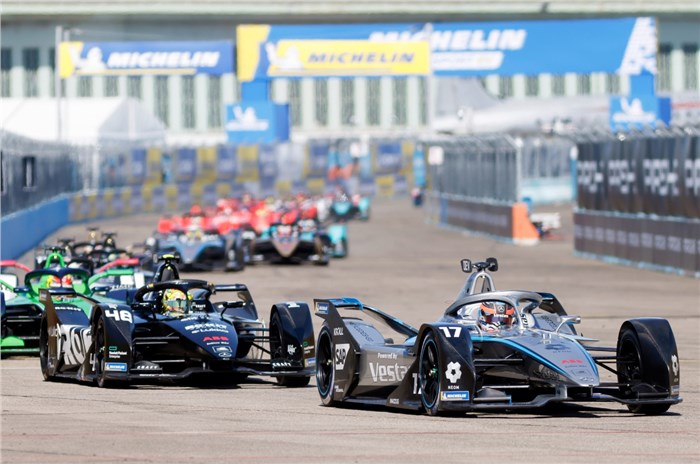 De Vries leads from Mortara in Berlin E-Prix, Round 8.

Venturi Racing’s Edoardo Mortara and Mercedes-EQ’s Nyck de Vries delivered strong performances at the Berlin E-Prix double header, picking up a win each. But it is Stoffel Vandoorne who holds on to his championship lead at the halfway point of the season, after finishing on the podium in both races.

After securing his maiden Formula E pole position, Mortara got away cleanly from Mahindra’s Alexander Sims and Techeetah’s Antonio Felix da Costa. He reserved his Attack Mode boosts for much later in the race. While he expectedly dropped a few places while activating these, the strategy helped him move back into the lead.

But he had Vergne on a charge behind him, with an extra percent of useable energy. Mortara went defensive at Turn 6, luring Vergne to make a move. But the Frenchman dived too deep and dropped 1.5sec behind Mortara. From there on, Mortara remained in control to take victory.

Vergne had to switch focus to defending from a resurgent Vandoorne, who had recovered after being shuffled down to 12th place at the end of Lap 12. The duo held position at the end, finishing second and third, respectively.

The second race ran on the reverse layout of the Tempelhof Airport Circuit. Nyck de Vries assumed the lead from Mortara in the first corner itself, with a strong launch from third on the grid.  He briefly lost the place after his Attack Mode activation but passed Mortara just two laps later to move into the lead once again. After that, the Mercedes-EQ driver enjoyed a threat-free run to victory – his first since the Diriyah season opener.

Having dropped to fifth, Mortara went for a late Attack Mode activation strategy, much like what he used to his advantage in the first race. With the help of this, he returned to second place, 2.454sec behind de Vries. Vandoorne once again completed the podium in third place.

The top three cars were all powered by Mercedes-EQ powertrains. The team itself is set to leave Formula E at the end of this season, and will be taken over by McLaren.

After a disappointing run in Monaco, Mahindra Racing made some progress in Berlin. Alexander Sims set the pace in qualifying, bagging a second-place starting position. He couldn’t replicate the same pace in the race and ended up crossing the line in ninth place. Nevertheless, this saw him score his first points this season. He could only manage 18th place in the next race, after picking up damage earlier.

Oliver Rowland had to serve a three-place grid penalty for his incident with Lotterer in the Monaco E-Prix. He charged through the field to go from 17th to 11th. He started the second race from 10th on the grid and once again started battling his way through the field. At one point he was running in the top five, but eventually dropped to seventh at the finish line.

This means Mahindra Racing walks away with a total of eight points scored in Berlin – encouraging form after being unable to score any points in the previous four rounds. “It was nice to start unlocking our potential this weekend,” summed up team principal Dilbagh Gill.

His pair of third-place finishes helped Vandoorne hold on to the overall lead in the drivers’ championship. Mortara is 12 points behind him, while Vergne is 16 points off the lead.

Next up on the calendar is a new addition – the Jakarta E-Prix, slated for June 4.