Jorge Martin steps up to Moto2 with Ajo KTM 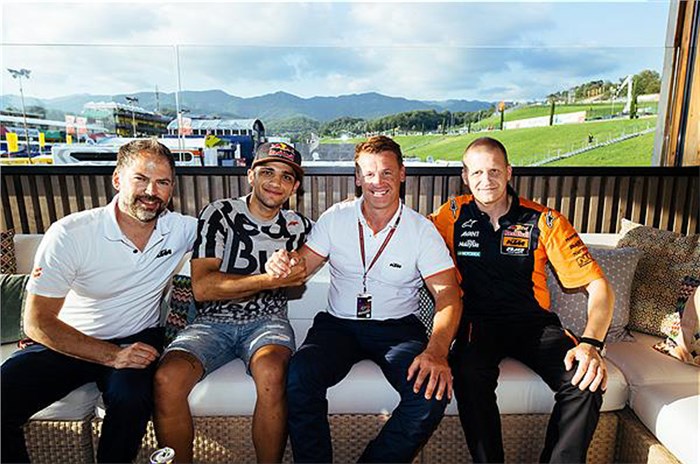 Jorge Martin (second from the left) with the rest of the KTM team.

Moto3 frontrunner and championship contender Jorge Martin will make the step up to Moto2 next year with the Ajo KTM team with whom he has signed a two-year deal. He will fill the slot that has been vacated by Miguel Oliveira – with the Portuguese rider moving up to MotoGP next year, riding for the Tech3 KTM outfit.

Martin has been previously associated with KTM in the Red Bull Rookies Cup, a championship he won in 2014. He then stepped up to Moto3 in 2015, riding for Mahindra, and took his first podium the following year at the Czech Grand Prix.

For 2017, he switched to Honda, riding for the Gresini team, and immediately found success. He took nine pole positions, nine podiums and one victory aboard the Honda, and finished fourth, overall, in the championship. This year, he currently sits second in the championship, having won three of the first six races.

The Madrid rider is expected to ride alongside Brad Binder next year, with the South African likely to remain in Moto2 for a third consecutive year, riding the Ajo KTM.

"It is such a competitive brand and I already cannot wait to start working this winter to attack next season. I want to learn as much as I can in the first year and fight to be at the top in the second," said Martin.