Hamilton beat Verstappen by a whopping 1.216 secs to take pole position for the Styrian GP. 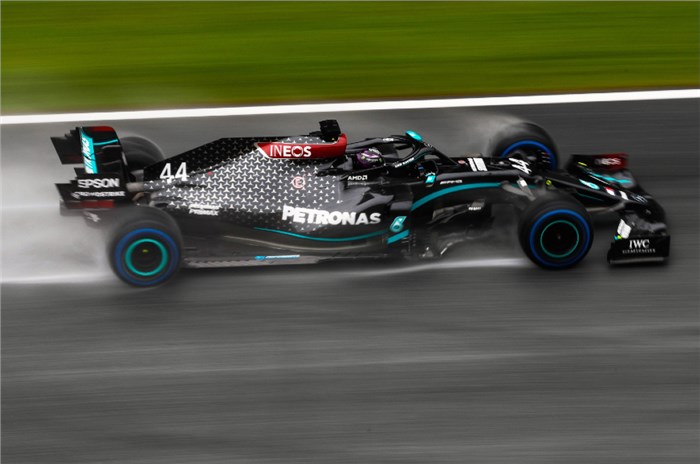 Carlos Sainz took full advantage of the conditions to take his best Formula 1 qualifying result to date with a 3rd place result for McLaren. Valtteri Bottas, winner from pole last week, was a disappointed 4th.

“Honestly, it was a fantastic lap the last one,” said Hamilton, who trails championship leading team-mate Bottas by 13 points in the overall standings after a penalty-hit drive to fourth in the season opener last week.

“The importance of managing your time out there, managing your battery pack, creating the gap, not making mistakes when it counts, that was a lap. That last lap for me was as close to perfect as I could get it in those conditions.”

Saturday’s pole was the 89th of Hamilton’s career. It was his third at the Red Bull Ring but first this season. At one stage it looked like the 35-year-old would have to face down a tough challenge for top spot from the equally rapid-looking Verstappen. But the Dutchman lost control of his Red Bull at the final corner on his final lap, which assured Hamilton of pole. That, however, didn’t stop the Briton from going even faster on his own final attempt.

“The third phase of qualifying (Q3) was very difficult,” said Verstappen, who had also started from the front row last weekend.

“A lot of standing water, I lost quite a lot of grip and it didn’t feel as good as in Q1 and Q2 but still to be second is alright. “I guess there was someone going in the pits, I understeered because of it and then I went a bit wide, I came onto the kerb on the exit and then I lost it… four wheel drift into the last corner,” he said of his mistake.

Stressful but happy session for Sainz

Sainz and team mate Lando Norris looked strong throughout the qualifying hour.  The Spaniard, who is set to replace Sebastian Vettel at Ferrari next season, will have his sights set on handing McLaren a second successive podium after Norris took advantage of Hamilton’s penalty to snatch the final podium spot last Sunday.

“I did enjoy myself but it was a very stressful qualifying session,” said Sainz.

“It would be good for you guys to see what we are actually going through in a Formula 1 car towards the end of Q3 with the amount of standing water, aquaplaning, not seeing anything and just keeping your foot flat, trusting that the thing is going to grip and putting the lap together.”

Esteban Ocon was 5th for Renault ahead of McLaren’s Norris, who was 6th but will drop three places on the grid due to a penalty. Alexander Albon was 7th ahead of Pierre Gasly in the Alpha Tauri and Daniel Ricciardo in the other Renault.

Ferrari’s struggles continued, despite the team having fast-tracked some updates, with the Italian team again managing to get just one car through to the top ten.

It was Sebastian Vettel who made the cut this weekend. The German will start 10th with Charles Leclerc, who salvaged second for the team last weekend, 11th after failing to make it through to the final phase of qualifying.

Like McLaren, former champions Williams also had something to cheer. Briton George Russell made it out of the opening phase of qualifying and will start a career-best 12th.

Qualifying got underway 46 minutes after its scheduled start with rain, that had already forced the cancellation of Saturday’s final practice session, lashing the track. Conditions were tricky throughout with drivers having to stay on the full wet weather tyres throughout.

However, Antonio Giovinazzi was the only major casualty of the slippery track. The Italian lost control in the final sequence of corners, sending his Alfa Romeo spinning into the barriers in the dying seconds of the first session.

Regardless of whether it rains or not, Hamilton looks to be the favourite going into Sunday’s race. The Briton last tasted success in Austria in 2016.