The final round of the 2019 MRF Indian National Racing Championship also saw Jeet Jhabhak win the Ameo Class title. Both titles were decided in the last race of their series. 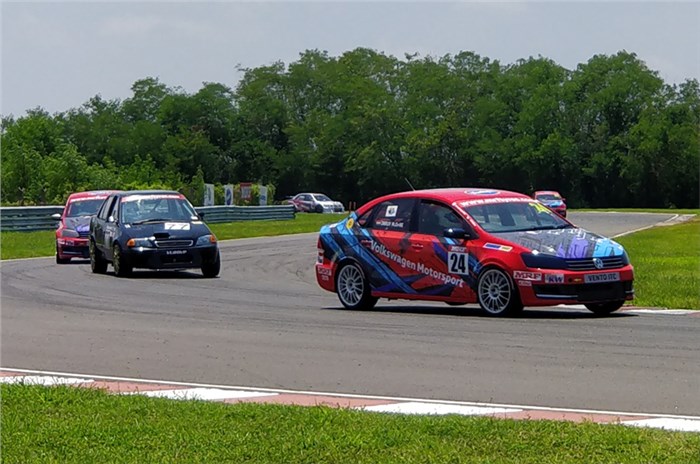 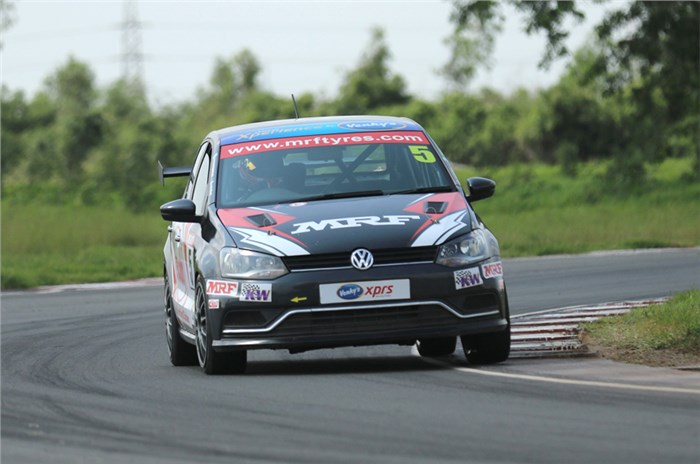 In this final round, Volkswagen Motorsport India hosted four accomplished South African drivers from the Volkswagen Motorsport South Africa team as part of an exchange programme. Jeffrey Kruger, Tasmin Pepper and Johan Pretorius participated in the AmeoClass races, while Daniel Rowe competed in the ITC races. Although these drivers raced in the round, they did not receive any championship points. This meant even if they won a race, they wouldn’t get any championship points. Instead, the next driver in the standings would get the points for first place.

The ITC category had one race on Saturday and one on Sunday. Arjun Balu (Race Concepts) dominated the qualifying session on Saturday morning, securing pole position; with Arjun Narendaran (Arka Motor Sport) locking out the front row.

In Race 1 held later on Saturday, Balu had a great start and managed to carve out quite a distance between him and the rest on the pack. Unfortunately, a power-steering issue and tyre deflation caused him to retire before he even finished the first lap. From then on it was a close fight between Narendaran, Rowe and Dhruv Shivaji Mohite (Volkswagen Motorsport) for 1st place. In the closing laps of the race Narendaran lost two places due to damage on the front left tyre. Rowe won the race, but Mohite bagged the points for the win, which put him just four points behind championship leader Balu.

The second race had a reverse grid for the top six drivers, which meant both Mohite and Balu had an equal chance to move up the grid, win the race and resultantly, win the championship. After 10 intense laps, Narendaran, Mohite and Karthik Tharani finished 1st, 2nd and 3rd respectively. Having finished the race ahead of Balu, Mohite secured enough points to win the championship in the ITC category.

In the Ameo Class, there were three races held over the weekend, one on Saturday and two on Sunday. The first race was action-packed with good racecraft on display from the top contenders. However, the South African drivers just had better pace and the race closed with Jeffrey Kruger finishing 1st, Tasmin Pepper in 2nd and Saurav Bandyopadhyay in 3rd. Bandyopadhyay did score the points for 1st place, though, thereby taking the lead in the championship standings.

The second race had a reverse grid for the top 16 drivers. This meant that the Race 1 winners would start towards the end of the pack, keeping the fight for the championship very much alive. This race witnessed very good offensive and defensive driving by the racers. Anmol Sahil ended up winning the race with Jeet Jhabhak taking 2nd place and Tasmin Pepper coming in 3rd. This put the top three contenders in the Ameo Class – Pratik Sonawane, Saurav Bandyopadhyay and Jeet Jhabhak – within two points of each other. Which means the title would be decided in the third and last race.

The grid positions for the final race were decided by the second-best times the drivers set during qualifying. Pepper and Kruger locked out the front row while Sonawane and Bandyopadhyay completed the second row. Once again, the two South African drivers pulled away from the rest of the pack. Behind them there was a heated battle for 3rd place between Sonawane, Bandyopadhyay and Jhabhak. Mid-way through the race, Jhabhak saw an opening and pounced on it, passing both Sonawane and Bandyopadhyay in the same corner. By the end of the race, Pepper and Kruger had carved out a 15sec lead with a respective 1st- and 2nd-place finish. Jhabhak finished the race 3rd, claiming the 2019 Ameo Class title.