The action-packed ITC races saw Dodhiwala and Balu win a race apiece, while Tharani was handed a one-race ban; Sonawane and Bandyopadhyay won in the Ameo class. 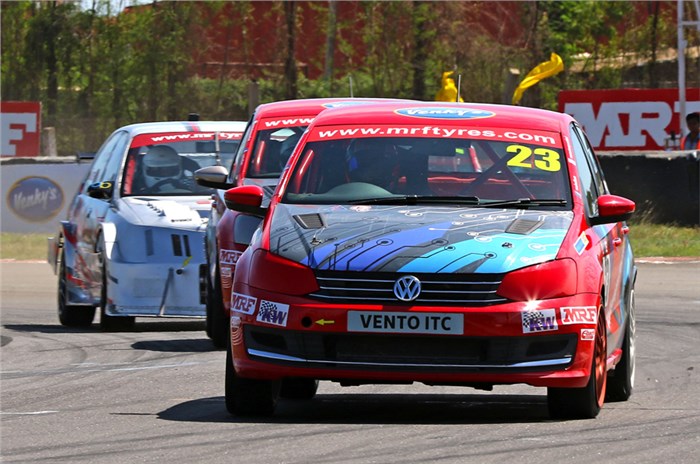 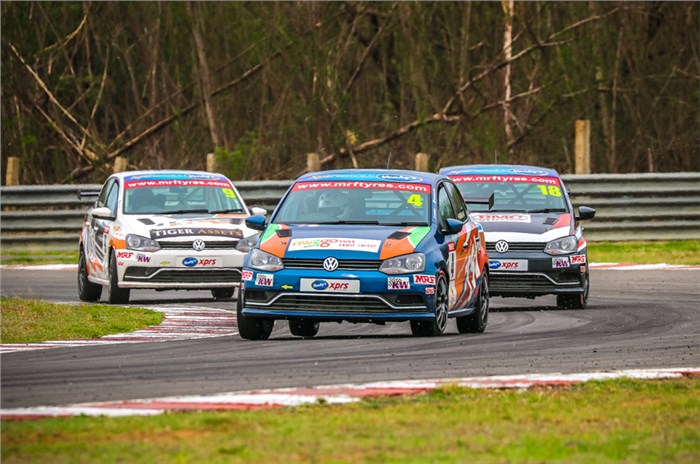 Starting off with the ITC category, there were a total of two races held over the weekend. Volkswagen drivers Dhruv Mohite, Karthik Tharani and Ishaan Doodiwala dominated the qualifying session for Race 1 with their race-spec Ventos, qualifying 1st, 2nd and 3rd, respectively. However, much to everyone’s surprise, the Volkswagen drivers failed to find the pace they had in qualifying, which was further emphasised by the impressive run Arjun Balu (Race Concepts - Honda City) was having, as he started from 5th and stormed his way up to the lead before the end of first lap. Balu went on to win the race with Volkswagen’s Karthik Tharani finishing 2nd and Nikanth Ram (ARKA Motorsports - Maruti Esteem) beating out Ishaan Dodhiwala to take 3rd place. Volkswagen had to retire Dhruv Mohite from the race due to technical issues with his car.

Race 2 – which followed a reverse grid format for the top six contenders – looked much more evenly matched, with the Volkswagen drivers putting up some compelling performances. The driving was spirited and the previous race leaders made their way to the top of the pack very quickly. The race ended on a dramatic note – despite crossing the line in first place, Tharani was disqualified from the race for disobeying a drive through penalty given to him on lap five and ignoring the subsequent black flag for the last three laps. The incident also resulted in Tharani receiving a one-race ban. This handed Ishaan Dodhiwala his maiden ITC win, with Nikanth Ram finishing 2nd, followed by Arjun Balu.

Moving on to the Ameo Class, the two races over the weekend saw 18 drivers compete in special, race-prepped Ameos that are equipped with a 205hp, 1.8-litre turbo-petrol engine paired to a 6-speed sequential gearbox with paddleshifters, a limited-slip differential, along with adjustable KW dampers.

Race 1 saw Pratik Sonawane take pole position, with Saurav Bandyopadhyay and Jeet Jhabakh starting from 2nd and 3rd on the grid. The race itself was rather uneventful as the top three qualifiers retained their positions. Race 2 – which followed a reverse grid format – was set up to be the more intriguing watch. Sonawane, Bandyopadhyay and Jhabakh, who started the race from 12th, 11th and 10th, respectively, had to fight their way through the pack, gaining positions slowly but surely. The race came down to the wire as Sonawane and Bandyopadhyay were still battling it out for top spot with only Avik Anwar ahead of them. While attempting to secure the lead, Sonawane left an opening for Bandyopadhyay, who passed him and moved up to 2nd.

Later that lap, Anwar was overtaken by both, Bandyopadhyay and Sonawane, resulting in a nail-biting finish. The three held their positions, with Bandyopadhyay winning the race ahead of Sonawane and Anwar. Meanwhile, championship leader Jeet Jhabakh had to retire due to a collision on the fifth lap. Anmol Sahil, who secured two podium spots in the last round, struggled with his car and finished towards the bottom of the pack.

Rounds 3 and 4 of the ITC class and the Volkswagen Ameo Class will be held at Madras Motor Race Track in Chennai in August and October, respectively, this year. Stay tuned for updates from the 2019 season.