Karthik Tharani enjoyed a strong ITC outing for Volkswagen. He won Race 2 and 3, and finished Race 1 in 2nd place. 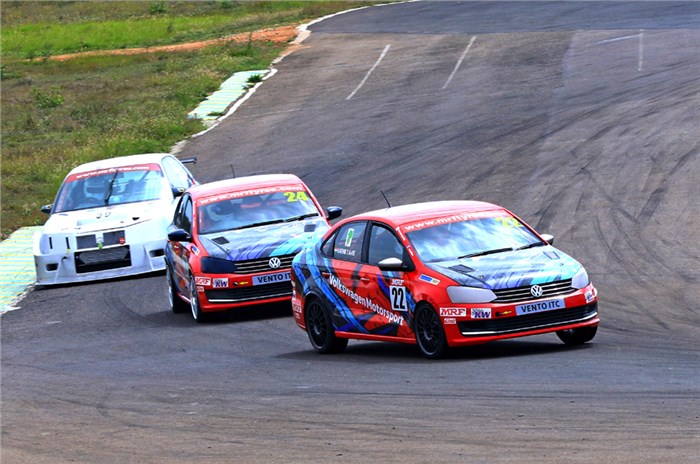 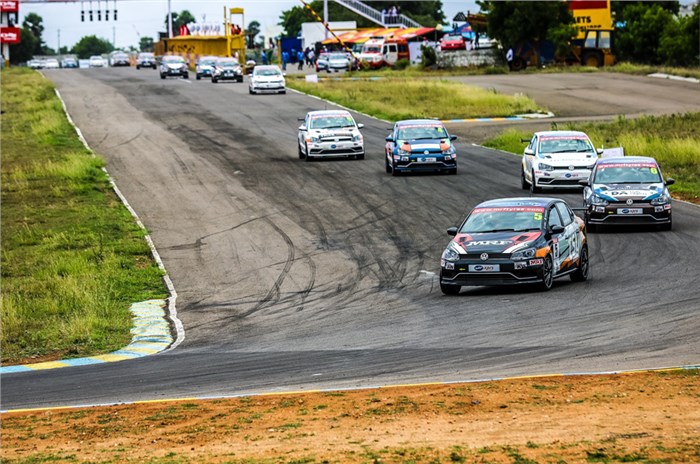 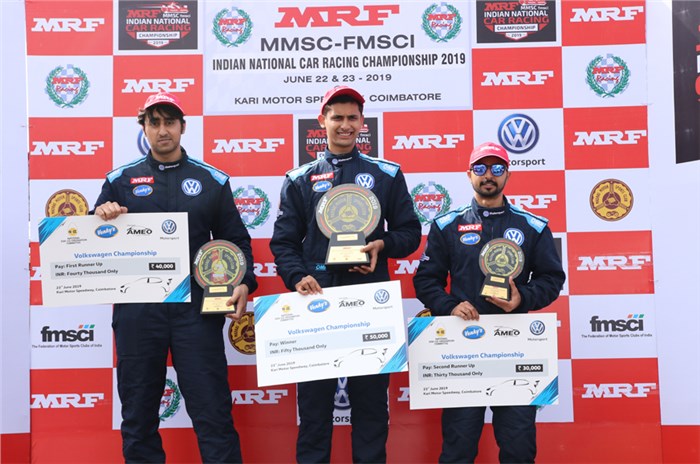 The race-spec Ventos completely dominated the weekend, winning all three races and grabbing 7 out of 9 podiums and two 1-2 finishes. Tharani enjoyed a strong outing, winning Race 2 and 3, and finishing Race 1 in 2nd place. Mohite, on the other hand, won Race 1 and took 2nd place in both subsequent races. Ishaan Dodhiwala was unable to reach the chequered flag in two of the three races, but did finish Race 2 in 3rd place, giving Volkswagen a clean podium sweep.

The weekend also saw the first round of the 2019 Volkswagen Ameo Class. Now included in the Indian National Racing Championship, the winner of the series will be crowned the National Racing Champion by the FMSCI. The first round consisted of three races over the course of two days. 18 drivers were competing in special, race-prepped Ameos with 205hp, 1.8-litre turbo-petrol engines under the hood, a 6-speed sequential gearbox with paddles, a limited-slip differential, along with adjustable KW dampers.

The day first day started off with the qualifying session, where Jeet Jhabakh took pole position with the fastest lap time of 1:09:571. He was followed by Pratik Sonawane who joined him on the first row. Last year’s championship runner-up, Saurav Bandyopadhyay, started in third place. The first race started off in mixed conditions and was action-packed, with three competitors failing to finish. In the end, Jhabakh took victory in a comfortable manner. Joining him on the podium were Anmol Singh Sahil and Saurav Bandyopadhyay who finished 2nd and 3rd, respectively.

The starting grid for Race 2 saw the top 8 finishers of Race 1 starting in reverse order. Therefore, with faster drivers starting at the back and charging up the field, there was plenty of action. Pratik Sonawane fought his away to the top of the pile in a matter of a few laps with Avik Anwar and Aiman Sadat – both of whom are from Bangladesh – following him closely. However, Sonawane was handed a 10-second time penalty for exceeding track limits and even though he crossed the finish line in first place, the penalty dropped him down to 7th. Anwar inherited the race victory, with junior driver Sadat finishing 2nd and Anmol Singh Sahil finishing 3rd.

The grid positions for the third and final race of Round 1 were based on the second best lap time achieved by the drivers during Friday’s qualifying session. Jeet Jhabakh took pole position while Pratik Sonawane joined him on the front row. Saurav Bandyopadhyay and Anmol Singh Sahil were third and fourth, respectively.

Race 3 was relatively clean and incident free. Right from the start, Jeet Jhabakh carefully and strategically defended his pole position throughout the race. Anmol jumped up one position by overtaking Pratik in the first lap itself. Thereafter, the trio of Jeet, Anmol and Pratik held their positions throughout the race. Pratik did feel the heat with Saurav trying to move ahead in the closing laps but he managed to hold on for the last podium spot.

Rounds 2, 3 and 4 of the Volkswagen Ameo Class and the ITC class will be held at Madras Motor Race Track in Chennai in July, August and October, respectively. Watch this space for updates from the 2019 season.