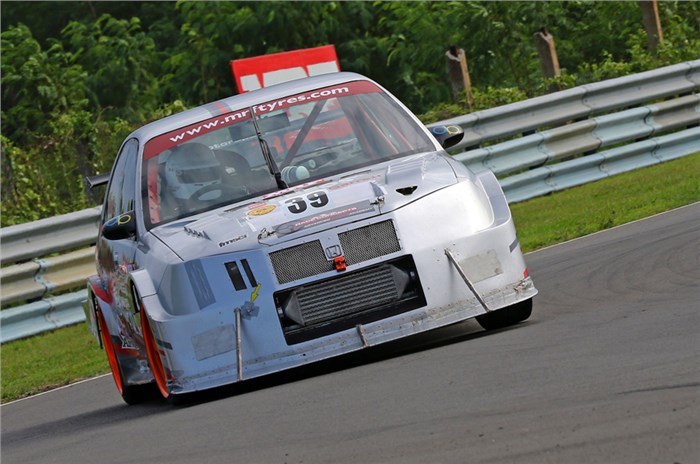 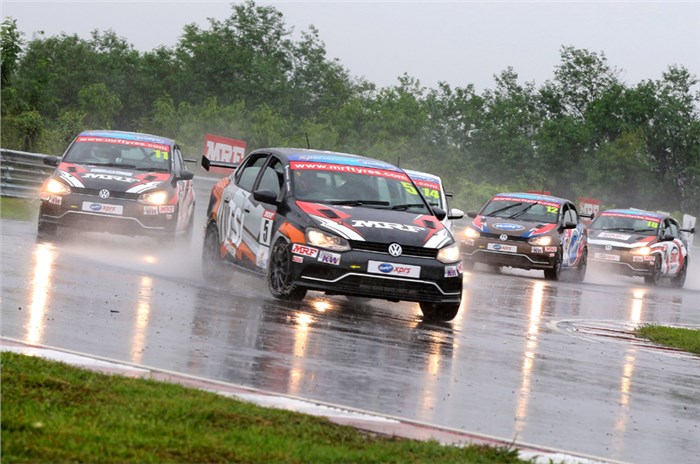 Round 4 of the 2019 MRF MMSC FMSCI Indian National Car Racing Championship was held over the weekend at the Madras Motor Race Track (MMRT) and it saw Race Concepts’ Arjun Balu walk away with two race wins in the Indian Touring Championship (ITC) category as rains caused multiple disruptions to the scheduled races, including the cancellation of the planned MRF Formula 1600 (F1600) races on Day 2.

Rains on Saturday morning saw the number of races for Day 1 reduced to just two ­­– one each in the Ameo Class and F1600 categories – with the remaining races­ pushed to the second day. Limited daylight time also pushed the organisers to reduce the number of laps on the first day and impose shorter time caps on practice and qualifying.

In the timed qualifying on Day 1, Balu bagged pole position in the ITC category with a time of 1:51.474sec. Behind him on the grid were Aditya Patel (who was brought in by Volkswagen to replace Karthik Tharani for this round) Dhruv Mohite and Ishaan Dodhiwala. The wet conditions for Race 1 provided the backdrop for a fight for first place between Balu and Patel for a large part of the race. Patel did take the lead in the closing stages of the race, but ceded the position back to Balu when he ran wide on the final corner of the next lap.

Race 2 saw a reversal of the grid and the weather – with drier track conditions and fewer instances of water on the track, all three Volkswagen driver headed out on slicks, while Balu stuck with wet tyres. The switch to slicks proved beneficial as Mohite and Patel quickly took hold of 1st and 2nd position and carried the momentum till the end. Balu rounded out the top three, nearly 8sec behind Patel. Race 3 was a simple affair with Balu leading from pole position and finishing the race in the lead, relatively unchallenged, ahead of Patel and Dodhiwala. The twin victories saw Balu’s tally raise him to 148 points, widening the gap from Mohite, who stands 2nd, at 119 points.

In comparison, the Ameo Cup proved to be a more open affair with three different drivers bagging victory in each of the three races. Race 1 on Saturday saw a reduction in the number of laps owing to rains earlier in the day and to make time for practice runs and qualifying. Saurav Bandyopadhyay claimed pole position in Race 1, with Shubhomoy Ball joining him on the first row and Ayush Tainwala and Siddharth Mehdiratta behind them. The race saw plenty of action early on with Bandyopadhyay and Ball battling it out for first place from the start and into the first corner. But Bandyopadhyay had a marginally better start of the two and was able to fend off Ball to claim first place, taking on a near-4sec lead by the time the chequered flag was waved. Pratik Sonawane showed some impressive driving, steadily climbing from down in 5th place to claim the last podium spot.

Race 2 saw the Ameo racers step onto a wet circuit on Sunday morning, which brought a new bunch of challenges. Starting from 10th on the grid, Sonawane put in a strong performance to steadily rise through the ranks. However, an error in lap 5 saw him retire from the race. Race 2 culminated with Jeet Jhabakh taking victory, with Aiman Sadat and Siddharth Mehdiratta rounding out the podium positions. Mehdiratta saw a particularly good run in Race 2 climbing his way up the order to 3rd place after starting from down in 14th.

By the time Race 3 began, the track had mostly dried. Having not finished Race 2, Sonawane put the result behind him with a measured and careful performance that saw him win Race 3 after starting from 4th on the grid. Mehdiratta and Ball came in 2nd and 3rd, respectively. Bandyopadhyay now leads the Ameo Class standings with 308 points followed closely by Mehdiratta (298) and Sonawane (294).

Team Race Concepts also saw more success in the Supper Stock category with Sudanand Daniel and Rithvik Thomas securing first place finishes in Race 1 and 3, respectively.  The final category hosted at the MMRT that weekend was the MRF 1600. Race 1 saw Sohil Shah claim his third victory in a row after having won the last two races in the previous round. Race 2 began with a wet track and pouring rain and was cancelled as soon as it started. Barely 300m into the race, pole-sitter Yash Aradhya came in contact with a puddle causing him to spin out – the trailing drivers were unable to avoid him, which led to a 10-car pile-up between the first and second corners and brought out the red flags. Fortunately no one was seriously injured. However, extensive damage to the cars saw the remainder of the races from the round postponed to the next round in September.