Caimi opted to sit out of the 2022 Dakar Rally after sustaining an injury during training. 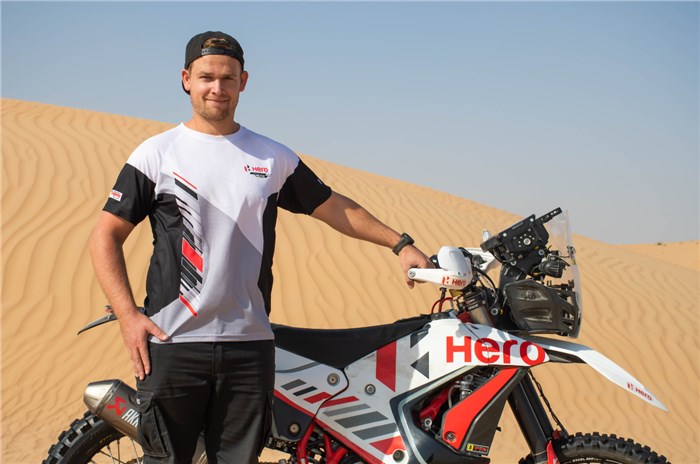 Hero MotoSports has drafted Aaron Marè to replace rider Franco Caimi, who recently injured himself while training in Dubai.

Caimi ruled out of Dakar

The 2022 edition was supposed to be Caimi’s first Dakar outing with Hero MotoSports. However, he recently suffered a fall while training in Dubai, breaking his arm and some ribs as a result.

He was initially expected to be fit in time for the Dakar Rally, but he has opted to sit out the rally to ensure full recovery ahead of the Abu Dhabi Desert Challenge in March 2022.

South African rider Aaron Marè has extensive experience racing on sand – something that will prove to be an asset with the 2022 Dakar Rally featuring sand more heavily than ever before. After initially competing in Europe and the USA, Marè has been racing in the deserts of Dubai since 2016.

His career highlights include podiums and wins at the UAE Baja Championship, Dubai International Baja, and the Emirates Desert Championship. He also won the 2019 Desert Storm Rally in Jaisalmer.

The year 2021 saw him win the UAE Desert Championship, while he finished the Abu Dhabi Desert Challenge in fourth place – one place behind new Hero MotoSports teammate Joaquim Rodrigues, who will be his teammate for the Dakar.

The 2022 Dakar Rally will be Rodrigues’ sixth outing with Hero; he’s been part of the Indian squad since its inception in 2016.

Sebastian Buhler and CS Santosh have also been ruled out of the 2022 edition as they continue recovering from their respective injuries.