Rabindra has been signed to the Aston Martin Racing Driver Academy for the third year running. 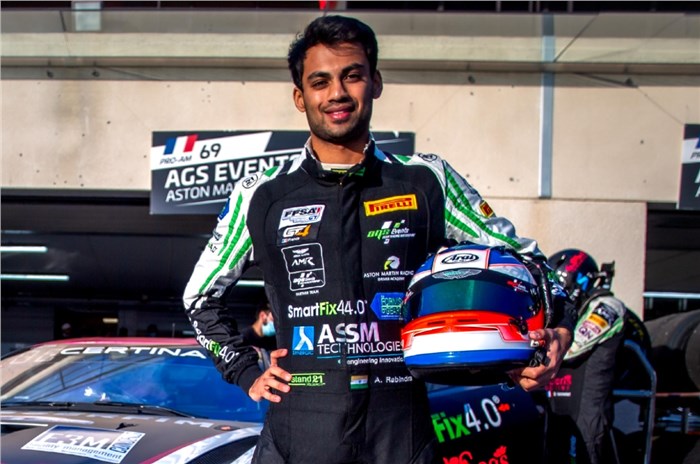 The Aston Martin Racing Driver Academy has signed Indian GT racer Akhil Rabindra for 2021-2022. This is the third year in a row that Rabindra has made it to the academy shortlist, and he is the only Asian to feature on Aston Martin’s roster.

The main aim of the Aston Martin Racing (AMR) Driver Academy is to “uncover the next generation of GT endurance superstars”. Those making it to the academy receive financial support for their 2022 race programme, as well as assistance and guidance from Aston Martin, tailored to their racing plans.

Speaking with Autocar India recently, Rabindra – who has been part of the Aston Martin Racing Driver Academy since 2019 – singled out the academy as a major factor in his growth as a driver. “The academy has been very helpful; you get a lot of exposure to very good drivers and a lot of resources,” he explained.

“There are the factory drivers, who have raced in multiple championships across the world and have a lot of experience. Then you can work with the same physical trainers they work with. There is the simulator, which even they use. So, you’re training on similar grounds as them and are on par training-wise. I think it’s opened up a lot of opportunities to learn off the track as well."

A total of 15 drivers made it to the final shortlist this year and will be competing in various championships with the hopes of bagging an Aston Martin Junior drivers’ contract. Drivers aged between 17 and 26, with Vantage GT3 and GT4 race programmes in recognised championships, are eligible. They were judged based on their pace, consistency, technical feedback, as well as their ability to manage the strategic, teamwork, public relations and commercial aspects of being a racer.

Commenting on the news, Rabindra said, “I am extremely excited and delighted to be at the AMR Driver Academy again this season. This year I have all the experience gathered from the past two years and no excuses to not perform to the best of my ability to prove to myself and AMR.”

The opening two races at Monza proved to be difficult for the 24-year-old. He wasn’t able to complete Race 1 and lost positions in Race 2, after having to take evasive action to avoid a crash ahead. So, he’ll be hoping to make a better impression at Round 2, which will be held at France’s Paul Ricard Circuit from May 28-30.