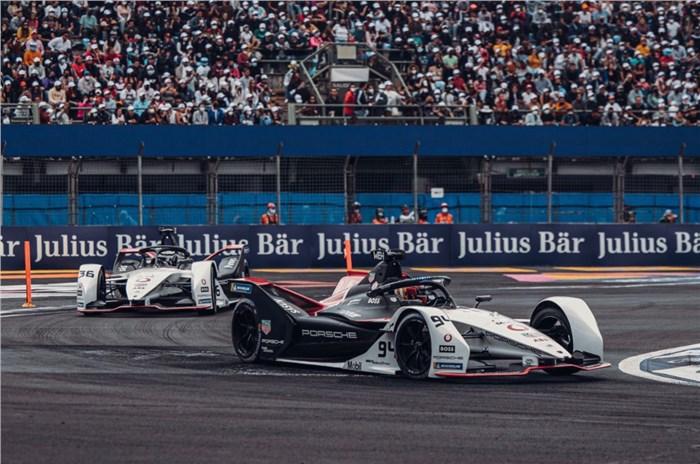 Porsche and its driver Pascal Wehrlein secured their maiden Formula E victories with a dominant performance at the 2022 Mexico City E-Prix. Andre Lotterer finished second to hand the team a 1-2 result.

It’s taken Porsche 29 races to score its first win in the all-electric racing championship. It wasn’t an easy maiden win, but all the cards lined up for the team at Mexico.

It momentarily looked like the team’s decision to save energy early on wasn’t a wise call as polesitter Wehrlein lost the lead to Venturi driver Edoardo Mortara and later dropped behind DS Techeetah’s Jean-Eric Vergne. The top six were split by just 2.2 seconds heading into the final 15 minutes. This is when it became evident that both Porsches had more useable energy than their rivals.

Wehrlein made his move on lap 25, passing Vergne into Turn 2, with Lotterer following suite. Just two laps later, both Porsches pulled the same move on Mortara to move up to first and second places, respectively.

The duo coasted past the chequered flag, followed by the DS Techeetah pair of Vergne and Antonio Felix da Costa. But Mortara’s fifth place finish was enough for him to hold on to the lead in the drivers’ championship.

“It was very important for me [to win here], I have raced here a couple of times in the Championship and been close so many times. Here in Mexico last year, was heartbreaking to finish in P1, but then get disqualified. It was payback this weekend and it feels amazing,” said Wehrlein.

Mahindra Racing wasn’t able to score any points at Mexico. The race ended early for Alexander Sims as he touched the wall and had to retire as a result.

With just one driver still racing, Mahindra opted to take a gamble with energy consumption and Oliver Rowland pushed to climb from 16th to eighth. However, the gamble didn’t pay off as the race ended up stretching to a lap longer than anticipated, and by the time the chequered flag was waved, Rowland had dropped back down to 16th.

“It was unfortunate to lose Alex so early on in the race, but Oliver put on a heroic drive to climb from 16th to eighth,” said Mahindra Racing CEO and team principal, Dilbagh Gill. “We knew it was a gamble to push that hard and for us, and many others, it didn’t pay off.”

He added, “All that said, we have loved returning to this vibrant city. Seeing our fans and partners back at the racetrack has given our whole team a real boost – the passion, the knowledge and the excitement really remind us why we do this. We will now regroup and use the six-week gap ahead of Rome to return to our race-winning form.”