Sims finished 2nd for Mahindra Racing in Round 4, while Vergne and Vandoorne picked up Rome E-Prix wins. 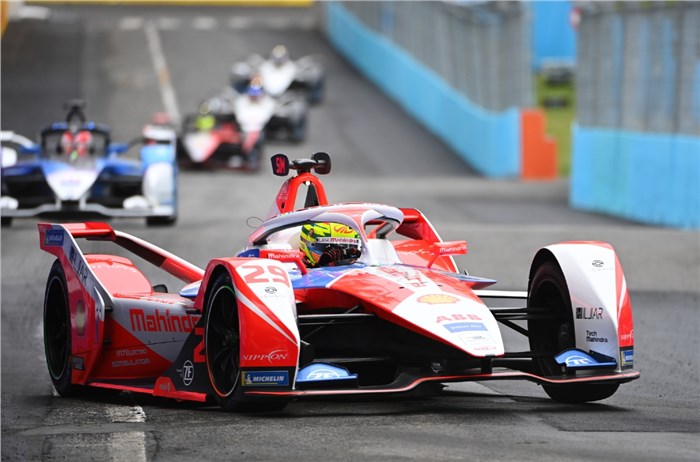 Read on to catch up on all the action from Round 3 and 4:

While Formula E has raced in Rome before, organisers introduced a newly configured circuit this year. This, combined with the wet weather conditions, set the stage for some incident packed races across the double header.

Starting from 6th on the grid, Sims had already climbed up to 3rd place by lap 7, boosted by polesitter Nick Cassidy (Virgin Racing) spinning out of the lead on the opening lap due to a suspected software issue. He then took full advantage of the Safety Car re-start, triggered by Audi driver Lucas di Grassi spinning into the wall, and pipped Porsche’s Pascal Wehrlein to 2nd place.

Despite showing the potential to challenge for victory, Sims was unable to find a way past Vandoorne and had to settle for 2nd place, finishing just 0.6 secs behind the Mercedes EQ driver. Nevertheless, it’s a solid result for the British driver and came as a much needed boost after his retirement in Round 3, just a day earlier.

Alex Lynn kept his nose out of trouble to finish the first race in 8th place and pick up four valuable points for Mahindra Racing. He finished 9th on the road in the second race, but was penalised for not using his second Attack Mode activation, which dropped him down to 17th.

The M7Electro features a new powertrain as the Indian squad looks to return to its winning ways, and Team Principal Dilbagh Gill believes this is already yielding results. “I am absolutely thrilled to return to the podium – it had been too long coming since our last visit, but we don’t plan on it being so long until the next one! We’re delighted that our new car, the M7Electro, with our new ZF powertrain, is proving competitive on track,” he said.

“We can already see that the incredibly hard work we have done on where we needed to improve from the last couple of seasons is paying dividends. I am so happy for Alexander Sims and it’s a wonderful start to the season for him in only his second race weekend for us. I’m sorry that Alex Lynn didn’t have the race we had planned today; we should have had them both up the sharp end of the grid, so that’s something we’ll be working on ahead of Valencia which is in just two week’s time – we have the taste of champagne now and I want the whole team to be drinking it!”

The first of two races in Rome started and ended behind the Safety Car. Several drivers traded positions for the lead – Porsche’s Andre Lotterer and Vandoorne collided while battling for the win, and the next race leader Oliver Rowland (Nissan) received a drive-through penalty for using too much power.

This handed Di Grassi the lead, and he was locked in a fierce battle with Vergne for the next few laps. Just when it seemed like he had victory in the bag, the Audi driver slowed down due to a technical issue on his way up the hill. Both Mercedes EQ drivers collided as Vandoorne took evasive action to avoid Di Grassi.

As a result, the race ended up finishing behind the Safety Car, with Vergne taking victory ahead of the Jaguar duo of Sam Bird and Mitch Evans.

Vandoorne bounces back to win Round 4

Vandoorne didn’t have to wait too long for redemption as he expertly managed a Safety Car re-start and fended off Sims to win Round 4 at the same venue the next day.

Nato finished 3rd on the road, but was given a post-race penalty for energy overuse. This promoted Wehrlein to the final podium spot, ahead of Venturi’s Edoardo Mortara.

Sam Bird leaves Rome on top of the drivers’ standings with a total of 43 points, just four points ahead of his Jaguar teammate Mitch Evans. Jaguar Racing also leads the teams’ championship from Mercedes EQ. Meanwhile, Mahindra Racing’s podium result has pushed the team up to 7th in the overall order.