Hamilton had to overcome a penalty after making contact with Verstappen on the opening lap. 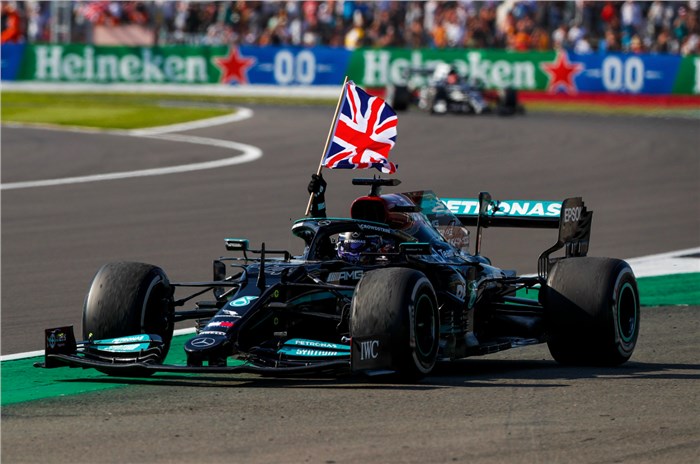 Lewis Hamilton picked up a hard-fought British GP win to spectacular applause from a home crowd. But it was a tough – and controversial – road to victory for the seven-time F1 world champion. He had to overcome a 10 secs time penalty for causing a collision with main title rival Max Verstappen on the opening lap and then had to find a way past Charles Leclerc to win at Silverstone.

Read on to catch up on all the action from the dramatic British GP:

The 2021 F1 season has shaped up to be a battle between Hamilton and Verstappen for title glory and this came to a head at the British GP.

As winner of the first ever Sprint Qualifying, Verstappen started from pole position. He and Hamilton fought wheel-to-wheel throughout the opening lap, but they ended up making contact when Hamilton tried pulling off a move into Copse.

This sent the Red Bull driver into the barriers at high speed, and after much deliberation, the stewards decided to hand Hamilton a 10 secs time penalty for the incident. Verstappen climbed out of the car after the crash, but appeared evidently shaken up. Red Bull has since updated that following an assessment by the trackside doctors, he has been “taken to a local hospital for further precautionary tests”.

The race was red flagged to fix the damaged barrier, giving Mercedes and Hamilton the chance to fix the damage to the front of his car. Meanwhile, the drama out at front handed Charles Leclerc the lead.

Once the race got going again, to many people’s surprise, Leclerc was able to keep Hamilton at bay. In fact, the Ferrari cars appeared to be significantly gentler on their tyres compared to Mercedes. Leclerc overcame engine problems to lead a total of 50 laps, but couldn’t hold off a charging Hamilton in the closing stages.

After serving his penalty, Hamilton made quick work of Lando Norris, and was soon up to 2nd place after Mercedes ordered Valtteri Bottas to not hold up his teammate. He then chased down Leclerc, and made a move stick on lap 50/52 to secure his eighth British GP win.

“I always try to be measured in how I approach battling with Max, he’s very aggressive. And then today, I mean, I was fully alongside him and he didn’t leave me enough space,”Hamilton said after the race.

“But regardless of whether I agree with the penalty, I took it on the chin and I kept working, I was like, ‘I’m not going to let anything get in the way of the crowd’s enjoyment of the weekend and the national anthem and the British flag’”

Leclerc had to settle for 2nd place, but he’ll be happy to bag his first podium finish this season. Bottas completed the podium in 3rd place, ahead of the strong finishing McLaren duo of Norris and Daniel Ricciardo.

With Verstappen’s winning streak coming to an end, what was a 32 point lead to Hamilton has now been slashed to just eight points.

Red Bull has also lost ground in the constructors’ standings, with both of its drivers unable to score any points. The team now leads the championship from Mercedes by four points.

Next up is the Hungarian GP, which will take place on August 1.