The upcoming season will see the two German giants - Porsche and Mercedes - join the grid, while several teams have re-jigged their driver line-ups. 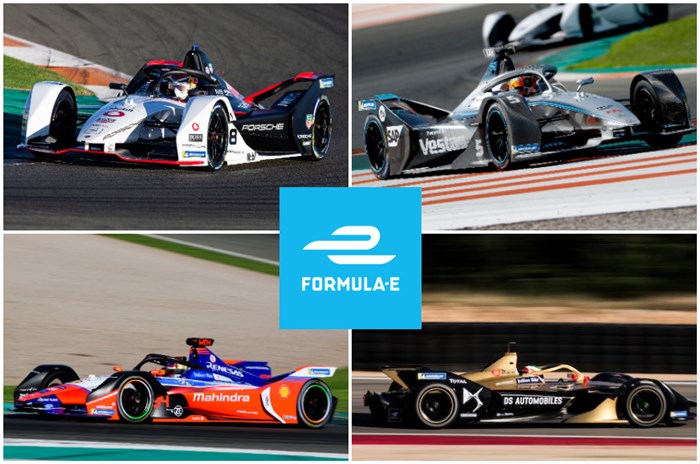 An all-new season of the Formula E championship will kick off next week with a double-header in Riyadh, Saudi Arabia, on November 22 and 23. While the upcoming sixth season sees the addition of new venues (Seoul, Jakarta and a new London circuit joining the 14-race calendar) and some promising fresh talent, the biggest talking point has to be the entry of the two German giants – Mercedes and Porsche.

Both manufacturers boast rich motorsport pedigrees and will come out with all guns blazing for their debut in the all-electric racing series. With the two teams joining the fray to compete with existing manufacturers like Audi, Jaguar, BMW, Mahindra and Nissan, Formula E will see what should be its most competitive grid yet. We take a closer look at all the teams and drivers that will battle out in the upcoming season: 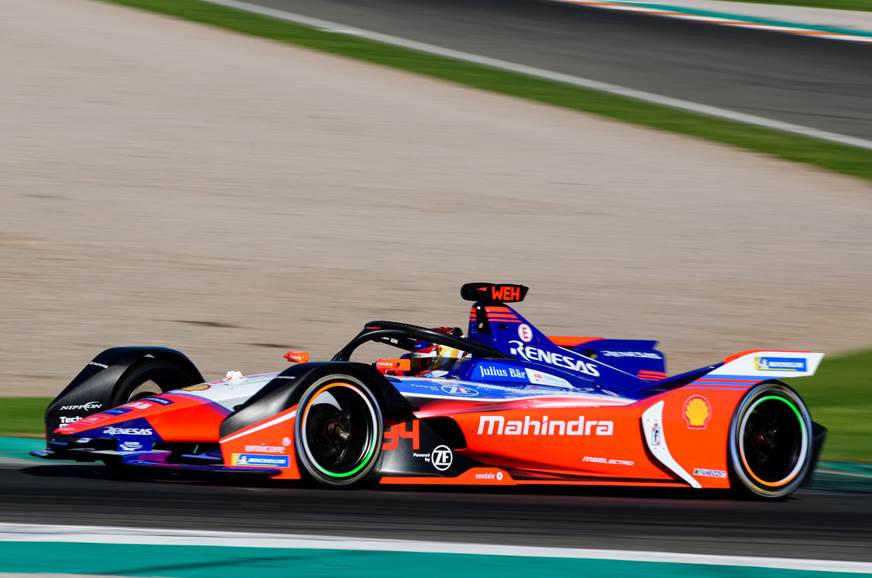 Mahindra Racing endured a rollercoaster of a 2018/19 season – the Indian squad kicked off the season on a strong note and at one point was leading both the championships. However, over the course of the season, its title challenge started to fade and it had to settle for 6th place. For this season, the team will be looking to consistently secure strong results and is sticking with last year’s driver line-up of Jerome d’Ambrosio and Pascal Wehrlein, who should undoubtedly help the team with the development of the new M6Electro. Additionally, the entire team has now been consolidated in one location – something that Team Principal Dilbagh Gill believes should help fast track the development process. To further bolster its championship chances, Mahindra Racing has also recruited David Clarke as Team Manager. Clarke previously served as the Team Manager of the reigning teams’ and drivers’ Formula E champions DS Teechetah, and he should bring some crucial experience to the team.

This new season will also see Mahindra Racing team up with ZF Friedrichshafen AG, with the technology major joining the squad as its new Powertrain Partner. As part of the new partnership, ZF will support Mahindra Racing’s season six campaign with chassis development work, bespoke suspension provision and engineering services. 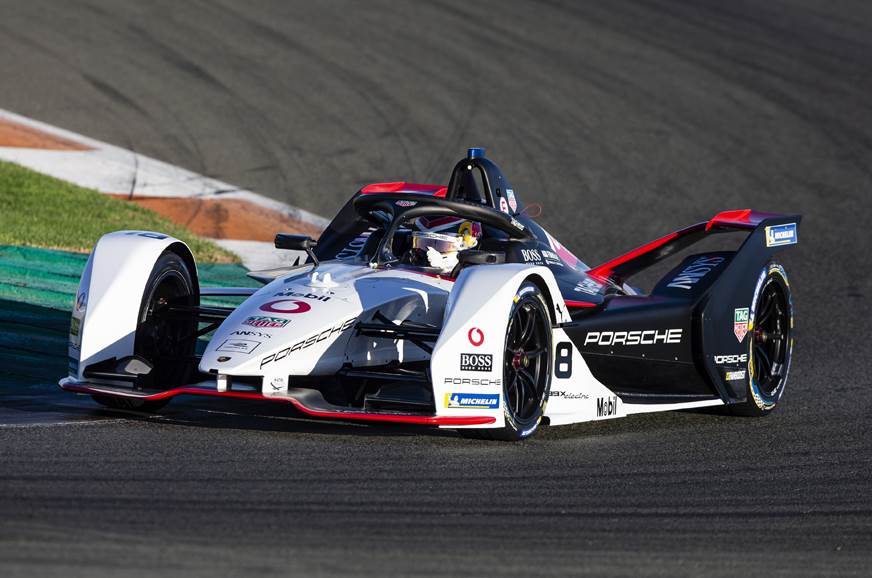 The upcoming Formula E season will see Porsche return to open-wheel racing after over 30 years. The team undoubtedly has some big ambitions, but as Jaguar had proved earlier, winning in Formula E is no easy feat, especially as a new team. To help the team on this quest, Porsche has enlisted former DS Techeetah driver Andre Lotterer. With two seasons spent racing a championship-winning car and four podium finishes under his belt, the experience Lotterer brings will play a key role in helping the team at this initial stage.

Driving alongside Lotterer will be long-time Porsche works driver and Le Mans winner Neel Jani – a driver who has been involved in the development of the squad’s 99X Electric race car. Jani has had a brief taste of racing in Formula E, competing in the 2017/18 season opener in Hong Kong for Dragon Racing, but this will be his first time racing the new Gen 2 cars. Jani and Lotterer already have experience driving alongside one another since the two were previously team-mates at Porsche’s LMP1 team in the 2017 World Endurance Championship (WEC) and later drove together for Rebellion Racing’s WEC team in 2018 and 2019. 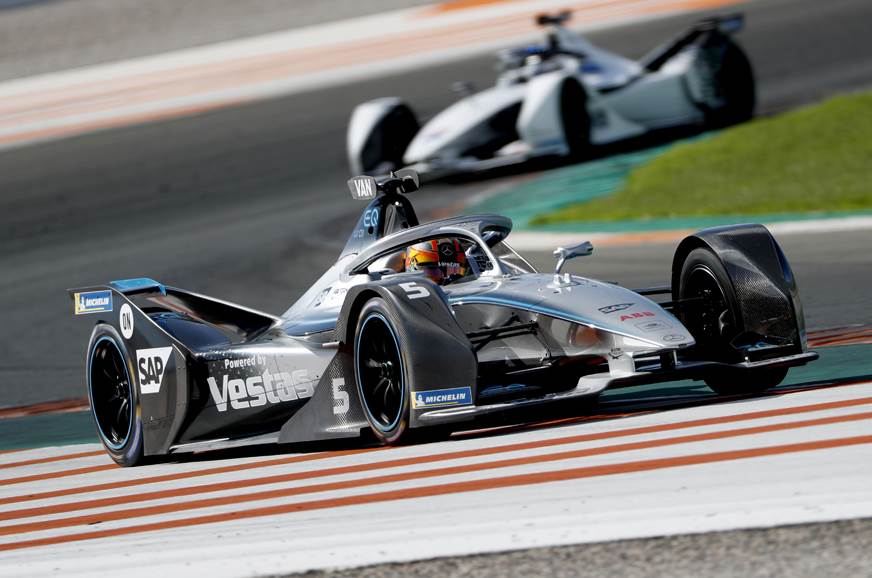 Just recently, Mercedes made motorsport history by becoming the first manufacturer to win six consecutive double F1 world championships, and now the German carmaker will start a new chapter by stepping into the world of all-electric racing. Of course, Mercedes won’t be entering the championship complete blind since it’s taking over the entry previously assigned to the HWA team. While the team will now run as a full-fledged Mercedes factory outfit, HWA AG will continue managing the cars on race weekends.

The team will sport Formula E’s youngest driver line-up of the season, with former F1 driver Stoffel Vandoorne leading the charge following an impressive debut season with HWA. He’ll be joined by 2019 Formula 2 champion Nick de Vries. The Dutch driver bucked the trend by opting to move to Formula E after being crowned champion in F1’s feeder series. 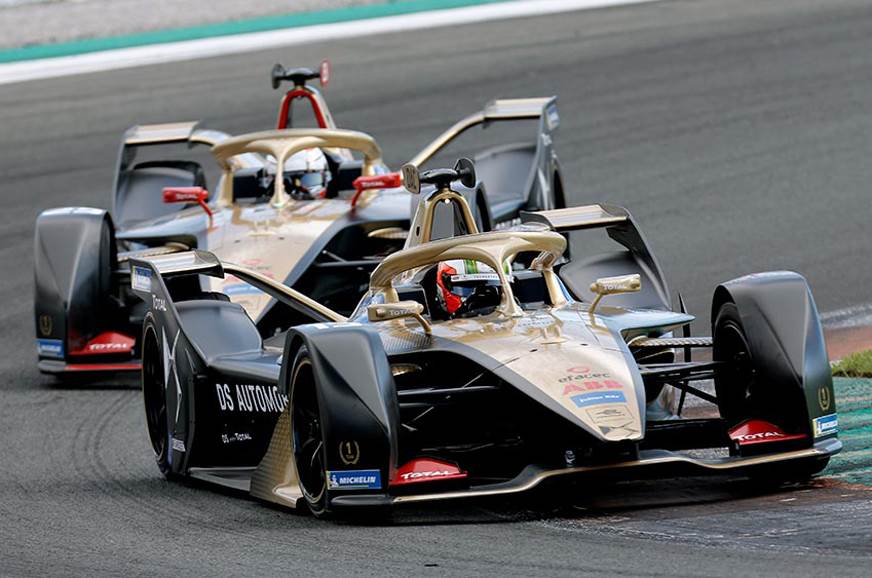 It’s gearing up to be a fierce intra-team rivalry at DS Techeetah as the reigning champions prepare for their third season in Formula E. Earlier this year, Jean-Eric Vergne made history by becoming Formula E’s first ever back-to-back champion, and while he will be looking to defend his title this season, he will have to face some tough competition with Antonio Felix da Costa now joining the team.

Da Costa decided to make the switch to DS Techeetah after previously driving for BMW i Andretti Motorsport. After briefly challenging for the 2018/19 title, he ended up completing the season in 6th place. The Portuguese driver has two race wins and five podium finishes under his belt, but he’ll be chasing that elusive title win this season. Nevertheless, with both Vergne and da Costa carrying years experience in Formula E, DS Techeetah appears to be armed with one of the most competitive driver line-ups on the grid. Audi has been part of Formula E since its nascency – becoming a full works operation in 2017 – and has been a regular frontrunner in the series. The team boasts a strong track record in the championship with 40 podium finishes in 58 races and a teams’ title (for the 2017/18 season) to its name, making it a firm favourite for the upcoming season as well.

After narrowly missing out on championship victory last season, the team has opted to stick to its tried-and-tested driver line-up as it chases its second title. Former champion Lucas di Grassi and Daniel Abt have both been with the team since the very first season and the experience they bring should undoubtedly be an asset in the development of the new Audi e-tron FE06. 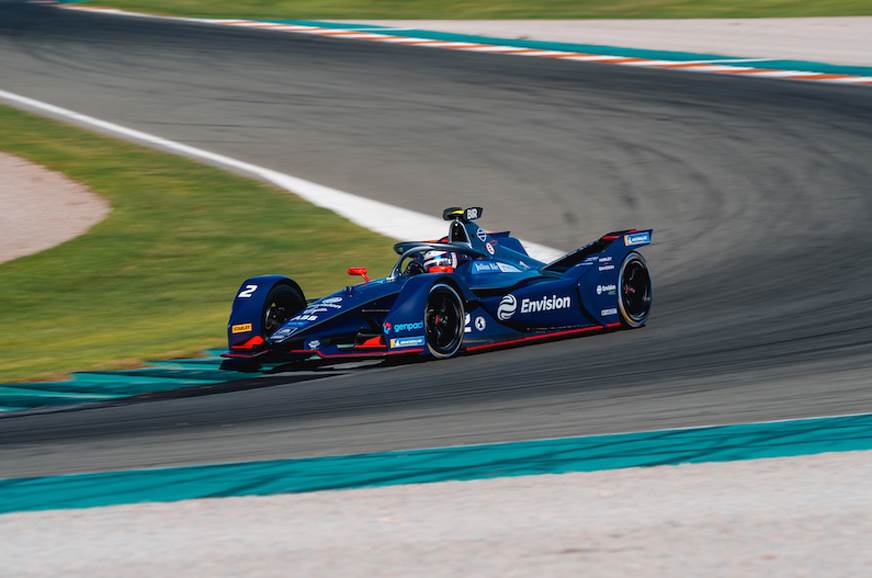 Another team that’s been part of Formula E since the very start, Envision Virgin racing will continue with seasoned racer Sam Bird, while Robin Frijns will also return for his second season with the team. Virgin Racing wrapped up the previous season on a high, with Frijns winning the last race in New York, and the team will be hoping to carry forward that momentum in the coming season.

After using a powertrain supplied by French car manufacturer DS Automobiles for three seasons, Virgin switched to Audi as its powertrain supplier last year. For its latest campaign, the team will continue running Audi cars. 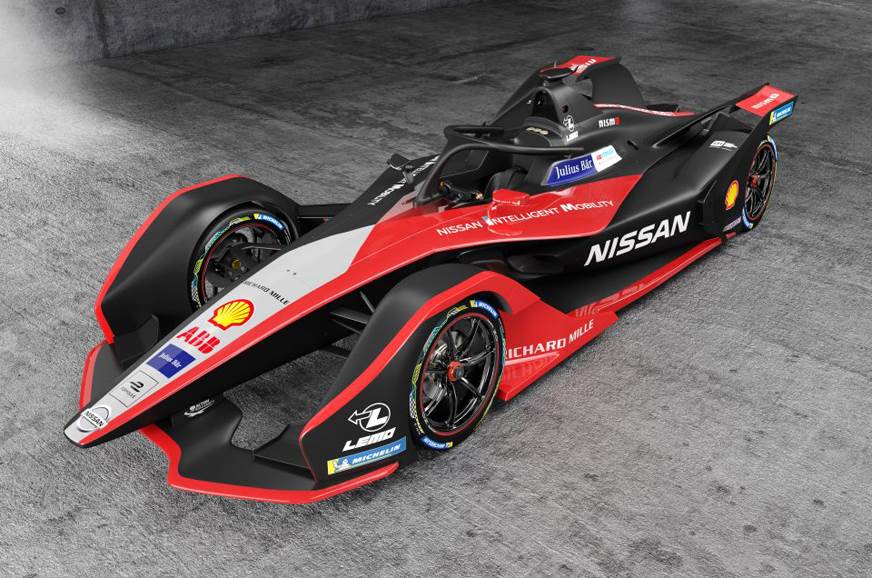 After taking over Renault’s Formula E operations last year, Nissan enjoyed an impressive maiden season in the all-electric racing series, completing it in 2nd place in the teams’ standings. On the back of that, the team will continue with an unchanged driver line-up comprising former Formula E champion Sebastien Buemi and Oliver Rowland, who completed last season as the highest-scoring rookie.

For its second season in the series, Nissan’s Leaf NISMO RC racer will don a new red, black and white livery that the manufacturer says is inspired by the Japanese kimono. The coming season will also be a crucial one for Nissan, with its new single-motor powertrain. Last year, Formula E made the decision to ban twin-motor powertrains from the 2019/20 season for cost-saving reasons – a move that only impacted the Nissan squad. While the car has already completed its initial testing at the pre-season test in Valencia, it remains to be seen if the new powertrain can truly deliver under race conditions. 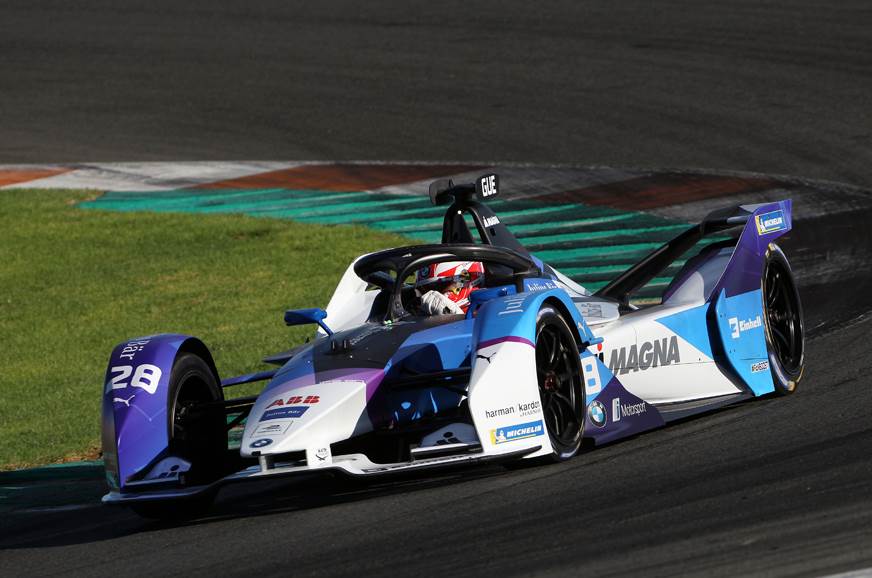 BMW enjoyed a great start to the 2018/19 season with da Costa winning the season-opening Ad Diriyah E-Prix. However, the rest of the season was marred by inconsistent results, car failures and penalties, and team had to settle for 5th place in the teams’ championship. With da Costa leaving the team for DS Techeetah, BMW has signed Max Guenther as his replacement. The German driver impressed in his debut season with GEOX Dragon, but he’ll be expected to continue delivering strong results at BMW. Further bolstering the team is the fact that Guenther also set the fastest time in pre-season testing.

Joining Guenther is Alexander Sims, who stays on for his second season with BMW. He completed the previous season on a high note, with a pole position and podium in New York, and will be hoping to carry forward that form into the new season and deliver more consistent results. Entering Formula E as a new team is no easy feat, no matter how well-established the manufacturer is, and Jaguar got its first taste of that when it entered the championship in the 2016/17 season. It finished its maiden season at the bottom of the teams’ championship, but made steady progress year-after-year and completed the previous season in 7th place. Moreover, a late surge last season saw Mitch Evans bag three podium finishes, including securing the teams’ first-ever Formula E victory in Rome. Evans emerged as the team’s star driver, securing 105 points out of the team’s total tally of 116 points, and as a result has earned a drive for the upcoming season.

Driving alongside Evans this season will be Formula E rookie James Calado. This will mark his return to open-wheel racing for the first time since the conclusion of the 2013 GP2 season. The British driver already has a World Endurance Championship GTE Pro title to his name, but he’ll be looking to now prove himself in this new challenge. After spending the past five seasons as an independent outfit, Venturi Racing has partnered up with Mercedes-Benz for the upcoming season. As part of the partnership, Mercedes-Benz will supply the cooling system, rear frame, rear suspension, dampers, software, onboard electronics and wiring, as well as the powertrain (including inverter, motor, rear-axle components and energy management software) for Venturi’s cars. It will be interesting to see if this new partnership will help Venturi move up the pecking order and how it will stack up against Mercedes’ new factory team.

As the team chases more consistent results, it has decided to retain both its drivers – Felipe Massa and Edoardo Mortara – for the upcoming season. GEOX Dragon is yet another team that has been part of Formula E since the very beginning. However, after completing a stellar maiden season in 2nd place overall, the team has since endured a downward trajectory. The team completed the previous season in 10th place out of a total of 11 teams. The upcoming season will be more competitive than ever with manufacturing giants joining the fray, but GEOX Dragon will be hoping to return to its winning ways.

Helping the team find its form this season will be an all-new driver line-up consisting of former two-time World Endurance Champion and former F1 driver Brendon Hartley and experienced DTM (Deutsche Tourenwagen Masters) racer Nico Mueller. None of the drivers have previously participated in a Formula E race, so they’ll need to adapt quickly. Nio 333 has spent the last few seasons languishing at the bottom of the standings. But the team will be running under an all-new management for the 2019/20 season and will be hoping that this significant shake-up will help it power up through the standings.

Oliver Turvey will be staying on for a fifth consecutive year and will be joined by the team’s former reserve driver Ma Quing Hua. The Chinese driver has had previous experience in the series driving for Techeetah and Team Aguri.