It’s a once-in-a-lifetime opportunity to drive cars that ace drivers race, and we got a chance to drive two generations of Mahindra Racing's Formula E cars. 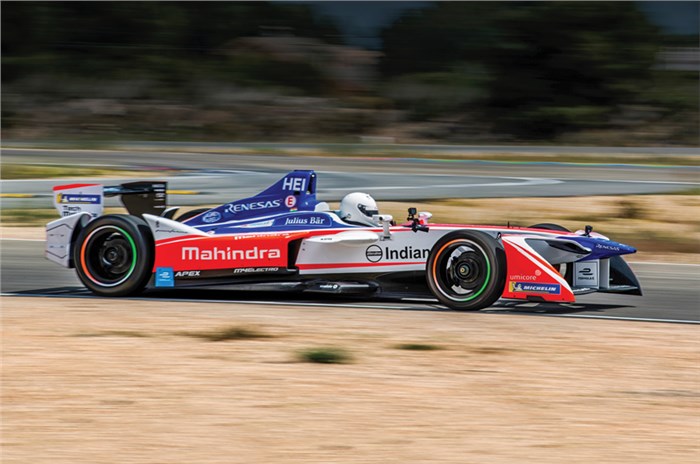 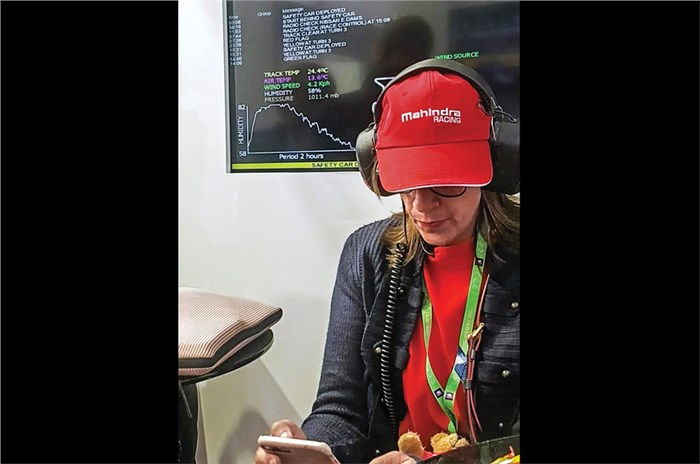 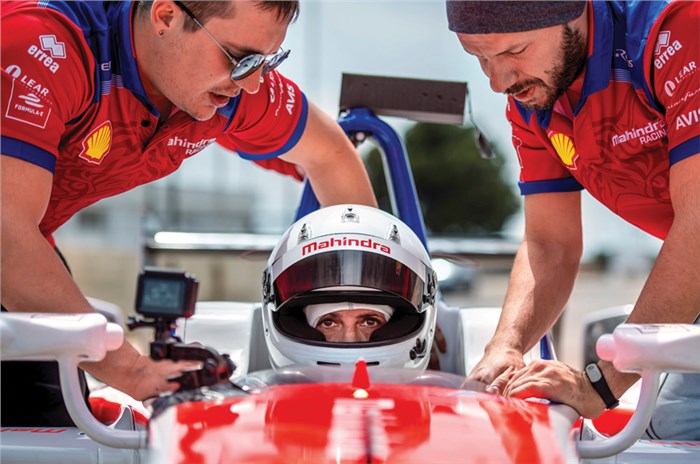 The buzz word in the automotive world these days is ‘electric’. Even the pinnacle of racing has an electric version — Formula E. Purists have scoffed, but the Series is gaining popularity really quick and I got the chance to go out and watch a race. Now that’s a story in itself, but the bigger story is that I actually got to drive the Formula E cars, both Gen1 and 2. Certainly an exhilarating experience, but let’s start from the beginning.

To be able to get into the Formula E car and race, it’s vital to have some experience. Our first stop is at QEV Tech in Barcelona, where the Mahindra Racing drivers come to get in hours of practice in the simulators. I feel pretty special already, with a team of engineers buzzing around me to do a seat fitting, settle me into the sim and get set to go. I think it is all okay, but then suddenly I hear, “No, no, no, she doesn’t have enough pressure on the brakes”. 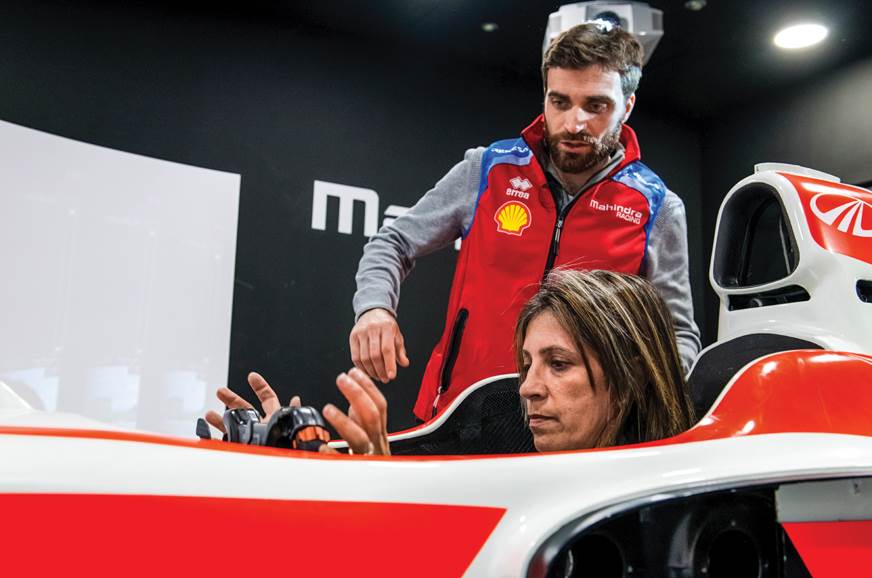 I look up to see Jérôme d’Ambrosio, the Mahindra Racing Formula E driver, peering over my shoulder. “Okay, press the brakes hard, stand on them,” he says. I am a bit in awe and do my best. “You see, it’s not enough. Move the seat forward,” he tells the engineers. Wow, and I thought I was just fine. While the engineers work to get some more padding in behind me, Jérôme tells me I need to get upto at least 40 percent to begin with. So this time around, I jam my foot down and it works. Finally, we are good to go and I’m nervous as hell because I have Jérôme instructing me. I have never been good at video games, hate the lack of real feel, and instantly I’m pretty lost in the simulator too. The brakes are hard to manage and I go off the track, into the guard rails and spin as well. I can see Jérôme and the team getting a little worried at my abilities. I feel a bit foolish too.

“Okay, focus,” I tell myself, but by lap 3, I start to feel uneasy. And then I spin. The car goes around on the three screens enveloping me, while I remain static. This messes with my head, which is also spinning, and my lunch begins to well up in my throat. I run out of the car and empty the contents of my stomach. I splash cold water on my face, but my head is still buzzing. “Let’s go get some fresh air,” Jérôme suggests. At this point, I’m feeling really sheepish. But he is such a great motivator. “Don’t worry,” he says, “Even Nick Heidfeld cannot handle the sim. It takes him a while to get used to it. Does a few laps, gets out and then builds it up slowly as it makes him uneasy too.” I know I’m supposed to feel better, but I don’t. Since there are others who are yet to have their turn at the sim, I don’t get to give it another shot. As a result, I’m not as familiar as I need to be with the circuit we are supposed to drive on the next day. 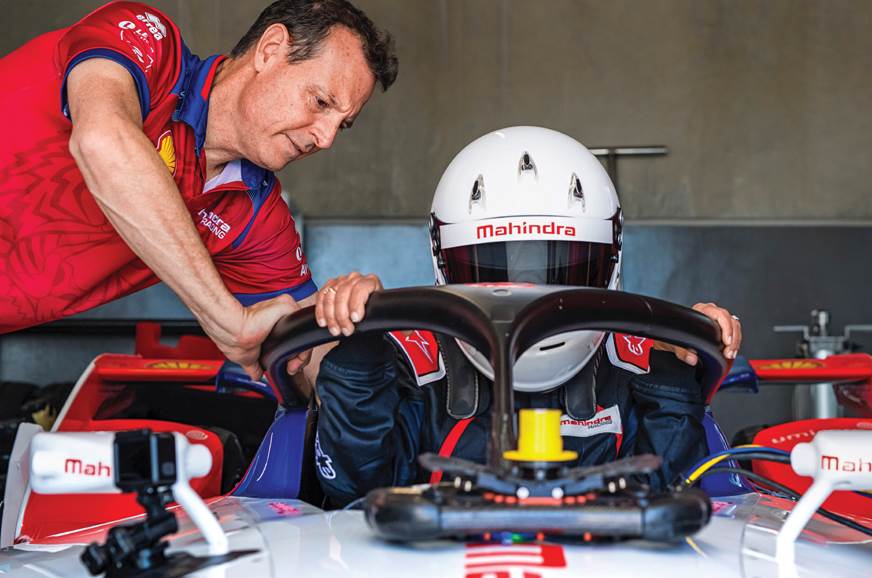 Getting into the Gen2 car over the Halo is an art.

Next morning, we head to Calafat. My head is just about getting back in place, but there are giant butterflies in my stomach. I have driven Formula cars, raced them too, but the session in the sim has made me nervous. Jérôme takes us around the track in the car so that I can familiarise myself with it, and then it’s time to gear up and get in. I’m told I will drive the Gen2 car first. Getting in over that Halo and into the seat is an art in itself and they make me do it a couple of times till I get my seating position right. Finally it’s time to go and my heart is now pounding. As they push the car out of the garage and into position, I can hear my breathing in the helmet — it’s shallow and quick. “Let’s go!” the engineers shout out.

I gingerly squeeze down on the throttle to exit the pit and the car leaps forward with an instant burst of power. As soon as I am out on the track, I feel at home. I slam my foot down and the Gen2 car pushes me back in my seat as the massive wave of torque propels me forward. There is a grin breaking loose under my balaclava and the butterflies have now flown home. 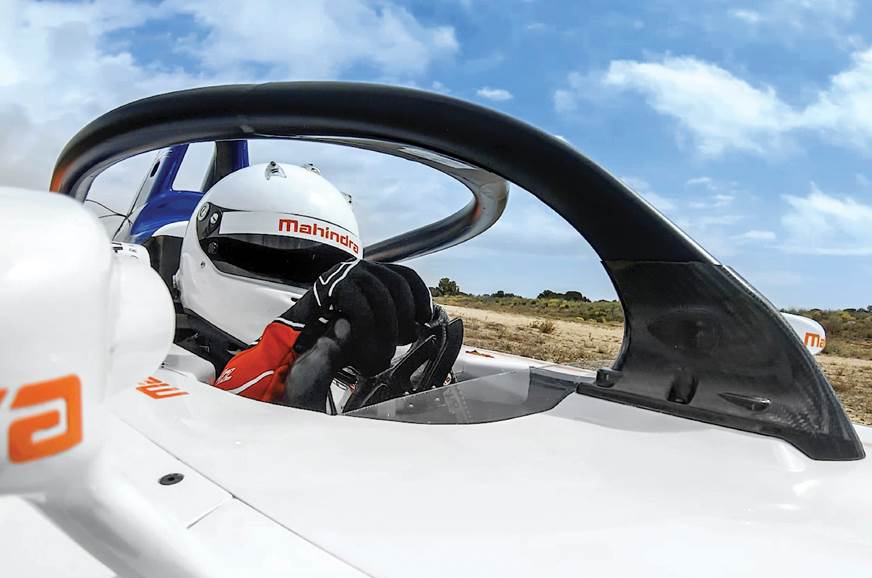 At the first corner, I brake early, remembering the simulation. But it works so efficiently that I realise I have slowed down too much for the corner. I hit the apex easily and floor the throttle as soon as I have the wheels straight, and boom, the power is back. It’s an odd feeling to speed without the scream of a revving engine. Here, it’s just the shrill whine of the motor and the wind whipping around the helmet, but it is strangely wonderful. It’s just you, the track, the car and nothing else, almost zen-like. It’s also deceptive because there is no screaming engine — you often don’t realise how quick you are going. We haven’t been given full power, of course, but it’s still really quick and this time I have to slam the brakes, slow down and turn in. The series of corners and chicanes are swiftly dealt with and by lap 2, I am in a rhythm.
The adrenaline is all there, the thrill of whipping around corners, the drama of flying down a straight and the twitch of the rear as you brake hard and drive into a corner again. This car may not sound dramatic, but behind the wheel it’s quite a blast. It is surprisingly easy to get a hang of, considering I’m not using the myriad of buttons on the steerings. There are no gears to worry about, no fear of over-revving; just torque on demand. The Gen2 car feels so stable, I wonder if I’m not going fast enough. But as the three laps come to an end all too soon, I drive in and there are grins all around. “That was really good!” I hear. A wave of relief washes over me. I haven’t lost the plot just yet. Still have some in me. 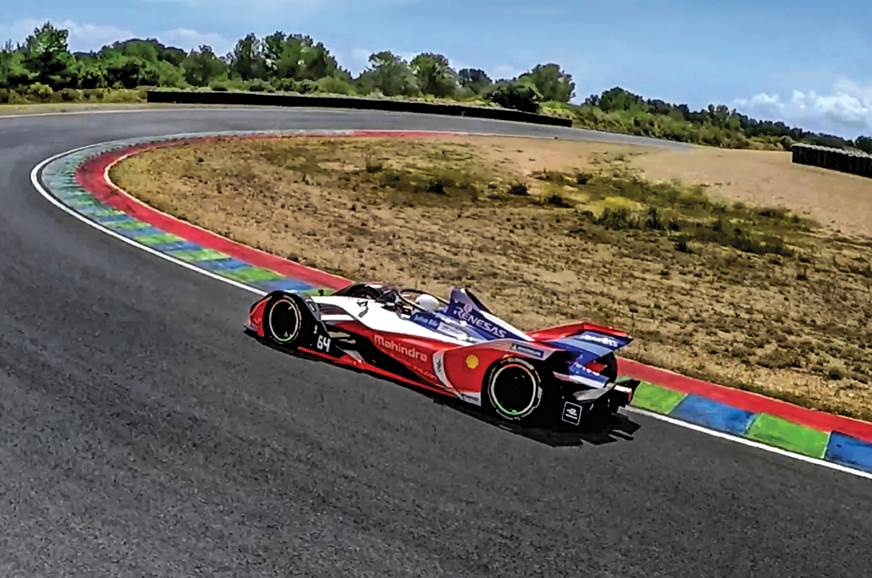 A quick lunch break and it’s time to drive the Gen1. This one’s easy to hop into minus the Halo. Now, with a sense of familiarity, I head back out on the track. Almost immediately, I feel the difference. Power doesn’t come in so easily once you brake hard, and you have to learn to work the throttle or the car judders as it gets back on power. The steering is heavier and requires way more effort, the brakes – well, let’s just put it this way: I have to stand on them to get them to bite. Around corners, you can’t brake progressively. You have to brake hard, align the car, turn in and power only once the wheels are straight, or it snaps much more easily.

I do two laps and by the third, which I know is the last I’ll have, I try to give it everything and overcook a corner. I brake a little late and realise I’m not going to make it. So instead of spinning, I simply run off into the gravel trap straight. That means it’s all over.

I’m stuck in that gravel trap, waiting for the crew to come and get me, but there is a massive grin under my helmet. The feeling’s sinking in — I’ve just driven the Gen1 Formula E car and I’m also the first female journalist to have driven the Gen2 car. The experience has been completely electrifying, to say the least. The drive in both the cars has made me realise the pace of evolution in the Series, in how short a while the car has been developed and also what a headstart Mahindra has in the EV race. The kind of technology and development that is happening here is already being shared with the Pininfarina Battista and it means EVs from Mahindra will be the ones to watch out for. 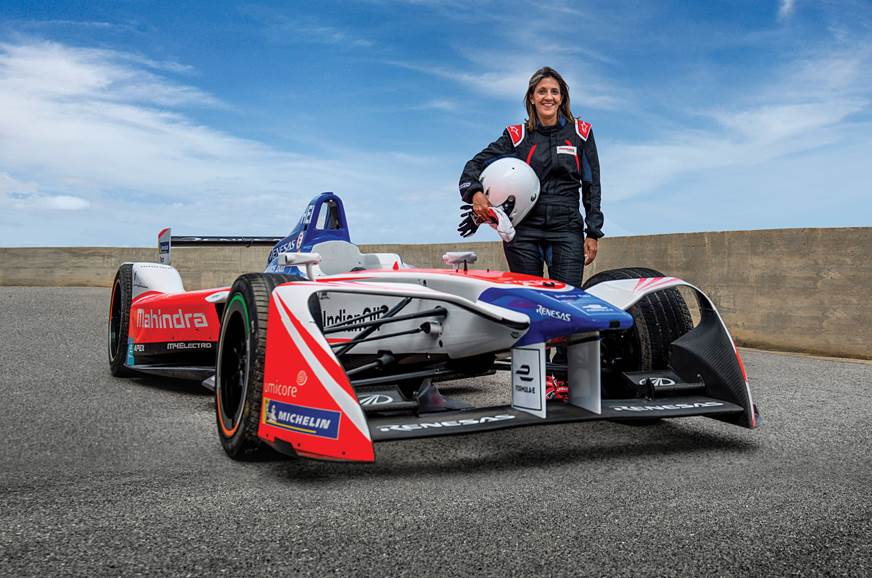 The Gen1 car was a handful but the smile still didn’t leave my face.

Back in the pits, Jérôme looks up, smiles at me and my wide grin, and says, “Wasn’t too bad, was it? Sorry, forgot to tell you the brakes really need to warm up in Gen1.” I’m pumped by the whole experience. Not bad? This was awesome.Bucket list ticked!

The Paris round of the Formula E was the first wet race of the season. Under the grey clouds in Paris, the Mahindra team whipped up a stellar performance, but the tension in the pit was palpable right until Pascal Wehrlein’s name came up at pole position on the TV screen. The whoops of elation all around made me get up and scream with joy as well. 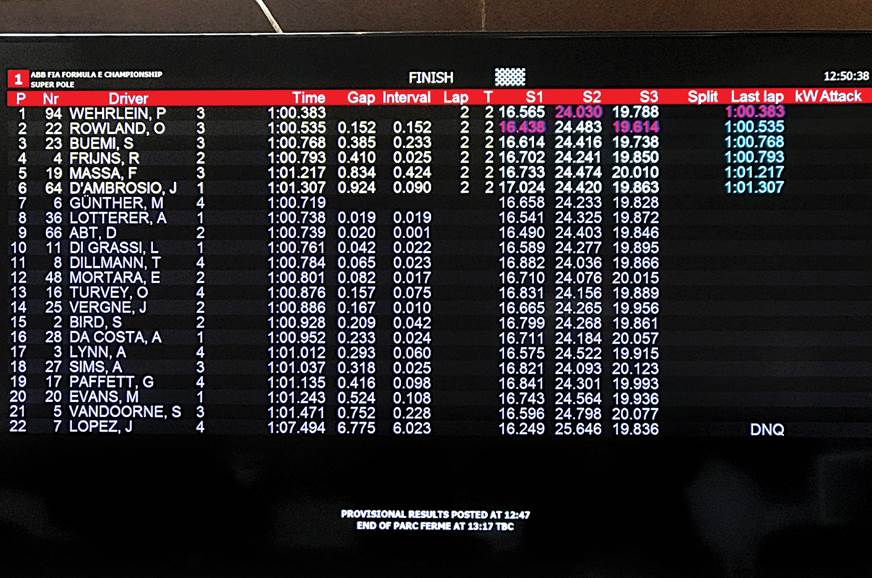 Watching the race with the team, you get to witness the tremendous work that goes on behind the scenes, right from prepping the car and getting it just right, down to the minute-by-minute strategy all through qualifying. For me, it was also a learning on how a high can so quickly dissolve into a low – the parameters of tyre pressure were not met by the team at the end of the qualifying and one small error took both drivers down to the back of the grid.

Now had that happened to me, I’d have probably lost my cool. But Mahindra’s sporting spirit clearly shone through as both drivers kept their heads firmly on their shoulders, took the setback in their stride and worked with the team to strategise on how to make the best out of the worst possible situation. 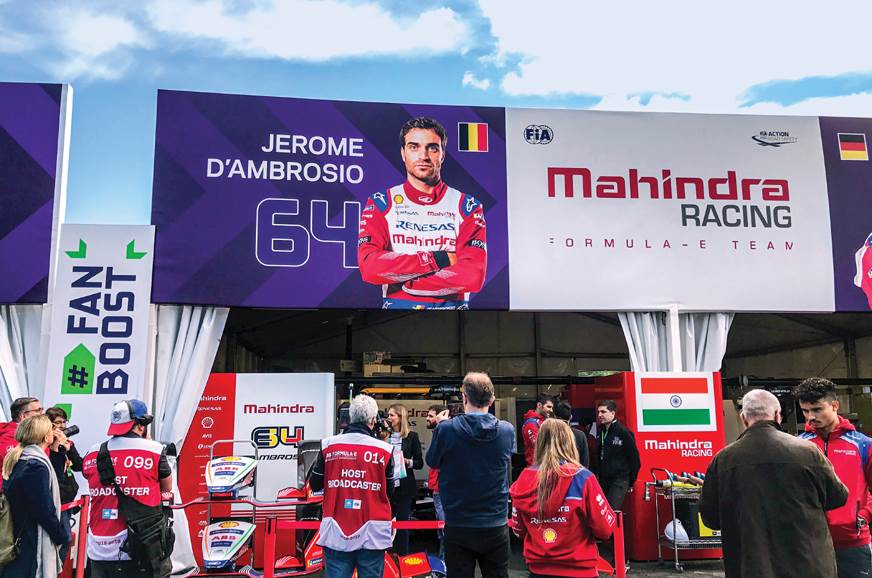 Being in the pits all through the action heightens the experience of the race.

The race itself was very wet and Jérôme d’Ambrosio pulled off a great performance to come up all the way to 7th position. The excitement of the team rubs off, and even I was standing there yelling “Yes!” every time he passed a car. Unfortunately, the tyres played a sorry part here too, with the safety car coming on for a long stint – the cold tyres and wet surface sent him into the barriers in the closing stages of the race. 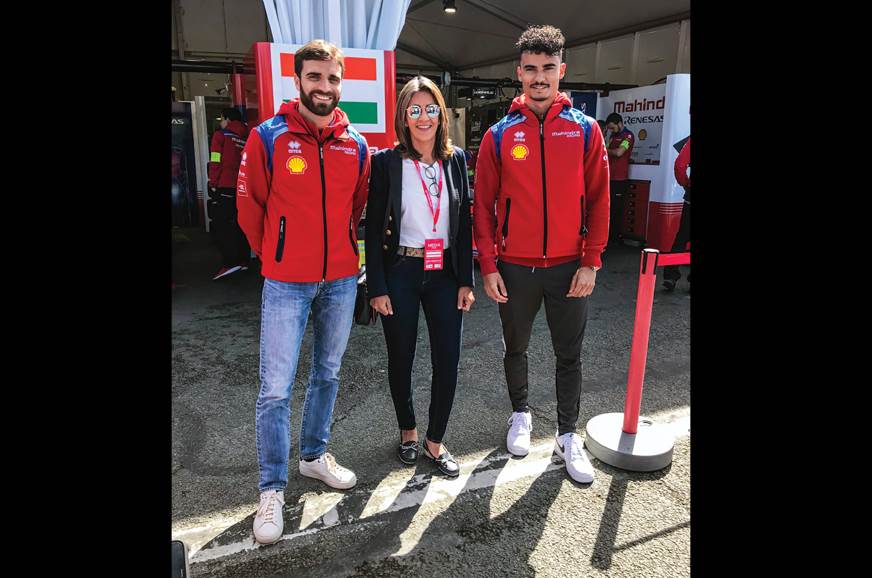 It was an amazing experience, with adrenaline pumping one minute and disappointment washing over the next. But mostly, it was a lesson about what “teamwork” really means.