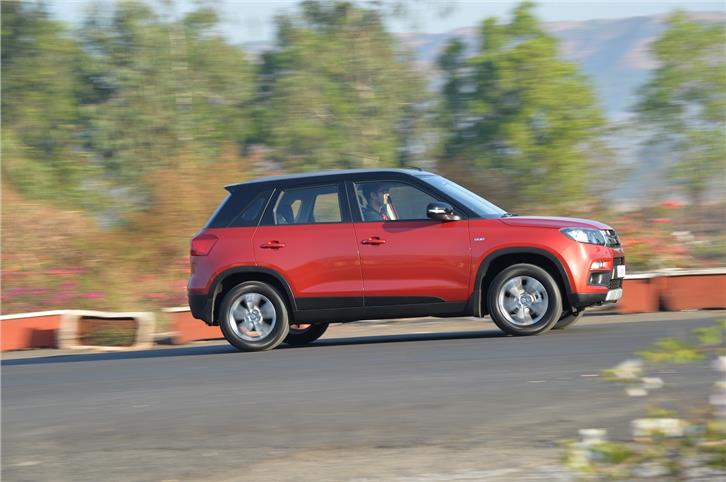 Maruti may be king in the small car space, but what the carmaker's line-up lacked was a compact SUV model. This all-new Vitara Brezza plugs that gap in India’s largest car manufacturer’s product mix. It’s an important product for another reason too – it is the first Maruti to be designed and developed entirely in India. Maruti insiders reiterate this is a model made in India, for India, and the 98 percent localisation level further underlines the point. The overwhelming initial interest in the car suggests Maruti has a winner on its hands, but let’s just zoom in a bit and see the Vitara Brezza for what it is.

Built on Suzuki’s global C platform, the Vitara Brezza measures just under 4m in length. Like chief rival, the Ford EcoSport, the monocoque-bodied Vitara Brezza places its engine transversally and will be a front-wheel drive only; there is no provision for an all-wheel-drive system. While the last bit is unlikely to be a deterrent for buyers, what is sure to find universal appeal is the Vitara Brezza’s safe but robust design. Maruti designers wanted to capture the upright stance and look of a proper SUV within the small footprint and it must be said, they’ve succeeded to that end.

The short overhangs, squared-out wheel arches and mildly raked tail do give the Brezza the look of a scaled-down SUV. Styling isn’t flamboyant, but the lines are clean and it won’t divide opinion like the EcoSport’s appearance can. That’s not to say the Brezza’s not got its share of interesting bits. The front is characterised by a high-set, chrome-rich grille flanked by neat headlights that, on top-end versions, get projector units. Seen head on, the Vitara Brezza’s LED running lights are also styled to resemble a bull’s horns.

The bumper with its split air dam under the grille, blacked-out fog lamp enclosures and scuff plate low down also adds sufficient bulk to the design. There’s a neat shoulder line and cladding at the base of the doors too, but it’s the tapering glasshouse that really gives the Vitara Brezza its unique look here. In a bid to give the Vitara Brezza a ‘floating roof’ look, the A-, B- and C-pillars come finished in black, while the roof and D-pillar are painted in the body colour and can also be had in a contrasting shade of black or white. Further, Maruti will offer three accessory packages, namely Glamour, Sporty and Urban, to let buyers personalise their car's appearance.

Styling at the rear is not radical, but the split tail-lights replete with the 'Bull Horn' light guides, the chrome bar with 'Vitara Brezza' embossed on it and the bumper with plastic cladding and a scuff plate do give this Maruti some personality. From the rear, the Vitara Brezza does bear resemblance to the S-Cross. Practicality is also good thanks to the tailgate that is wide and extends low, allowing good access to the well-shaped 328-litre boot. Boot space can be extended by lifting the rear seat base and folding the 60:40 split seat backs forward to create a completely flat luggage space.