We drive Renault's sub-four metre 7-seater to see if it makes for a compelling alternative to traditional budget hatchbacks. 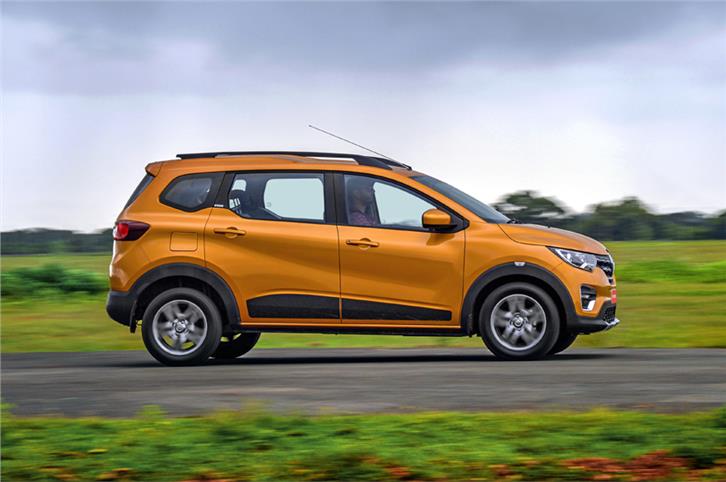 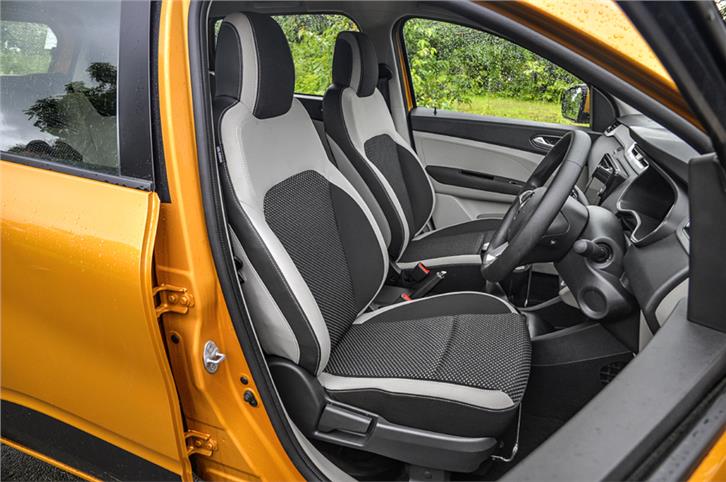 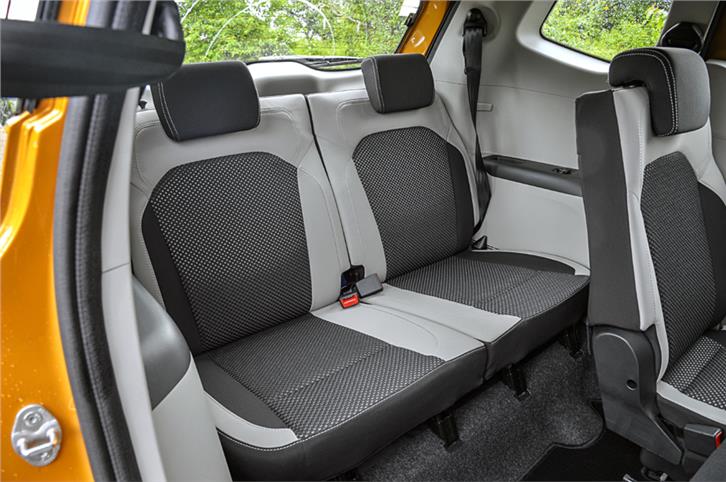 The French have a knack of doing things differently. So when Renault set out to build a 'small car' for India, the team didn't want to be boxed in by traditional body styles or even seating configurations. Instead, what they've come up with is something very interesting. It's called the Triber and its USP is seating for seven passengers. 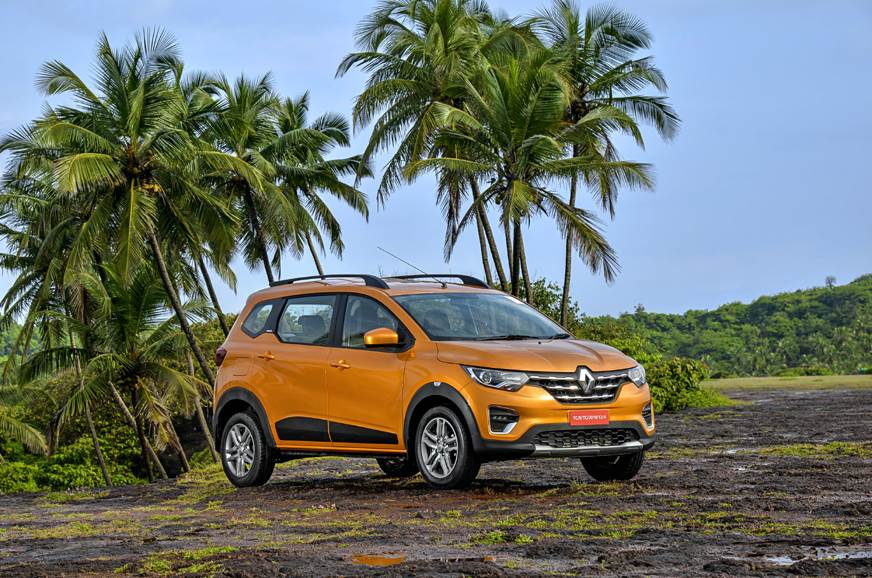 The term 'small car' has to be used a bit loosely when talking about the Triber. Sure, it's under 4m long but it's still quite a substantial vehicle. The Triber's 1.7m-plus width and 1.6m plus height make it about the size of the Maruti Suzuki Vitara Brezza. However, the Triber’s trump card is its 2,636mm wheelbase, which is among the largest of all sub-four-metre models. Interestingly enough, the choice of engine had a role to play in the Triber’s short bonnet and large passenger cell proportions. Early into the project, Renault decided to scrap the diesel engine option, and the space saved by opting for a small petrol engine was made available to the passengers. 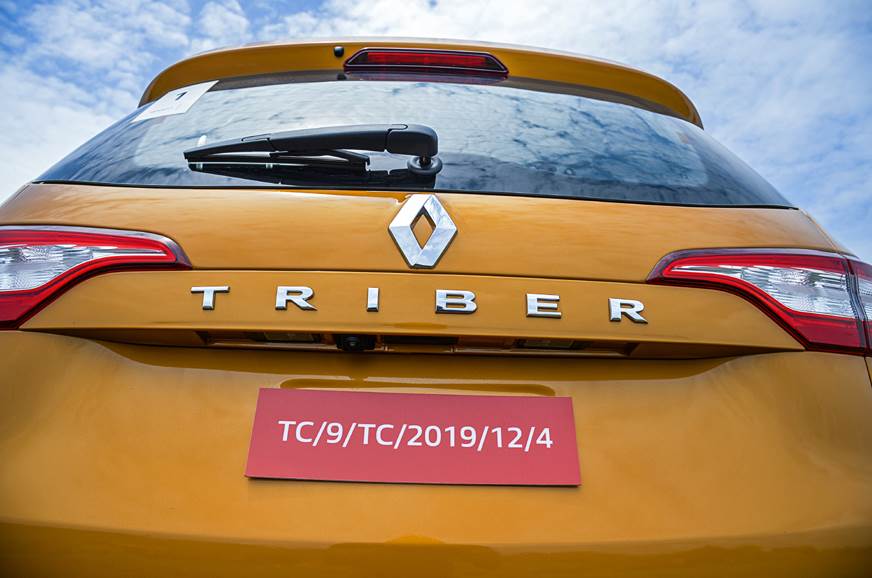 Renault hasn’t categorised the Triber’s body style, though perhaps 'crossover' describes the shape best. You’ll find many SUV-inspired elements such as scuff plates at the front and rear, cladding around the wheel arches and chunky runners at the sides. The roof rails (with a load capacity of 50kg) also add some attitude to the design and also smartly mask the stepped roof, an essential element that liberates headroom at the back. What undoubtedly also helps the Triber’s stance is its 182mm ground clearance. Note, 14-inch steel rims are standard but our test car had the optional 15-inch wheels with cleverly styled wheel covers designed to give the look of alloys. 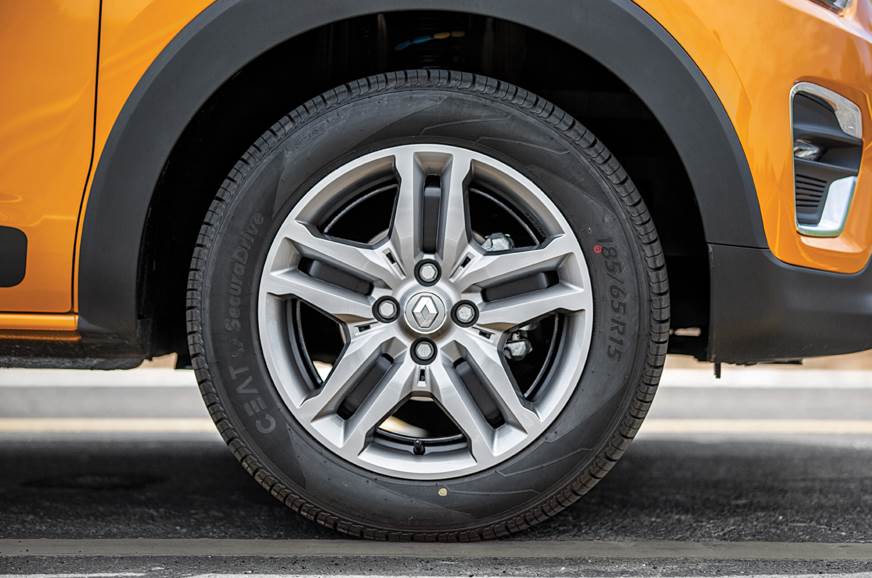 The Triber conforms to Renault’s global styling language and, in effect, has a very international look to it. The Renault lozenge takes pride of place up front and the manner in which the shapely headlights (with their projector elements) fuse into the grille is also nice. LED DRLs are also part of the package. Adding further distinction to the Triber is the glasshouse that has a distinct kink at the C-pillar to help break up the van-like window line. An upright tail with its large wrap-around tail-lamps brings up the rear.

There's lots to talk about the Triber's interior so we'll go row-wise, from front to back. Drivers will like the elevated seating position (there's no seat-height adjust) and the corresponding good view out. You'll also like what you see on the inside of the Triber. Material quality, for one, is right up there or perhaps even better than what you get in the pricier Captur. There are no soft-touch materials but the plastics have a hard-wearing look to them. The thick bar of faux metal on the smart dash adds a look of robustness and the dual-tone theme is upmarket too. Even things like the multi-fabric material on the seats, the small bezel around the starter button and the neat steering wheel, add to the impression. 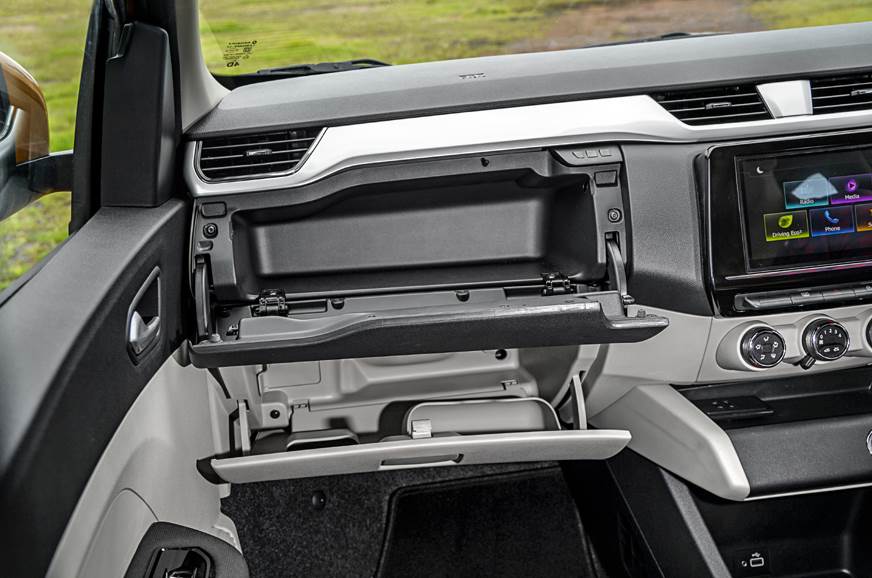 What also works well is the new 8.0-inch touchscreen. It's not only a size larger than Renault's older 7.0-inch unit, but also feels far slicker. Android Auto and Apple CarPlay are part of the package and there's an Eco Readout too that scores drivers on efficient driving. What's also unique is the part-digital instrumentation. The large MID reads out speed while the pizza slice-like tacho that lights up with the revs is interesting in its own way. Keyless entry and go, a remote-like key and front and side airbags are some of the other features you get on the top-spec Triber RxZ. The Triber cabin also comes across as well-thought-out with lots of storage for small items. There's a tray below the air-con controls, a dedicated bay for your phone at the base of the centre console and there are not one but two gloveboxes. The lower glovebox is cooled and Renault has also included another cooled box between the front seats. It's large enough to hold a 1-litre bottle and a few cans. Each of the four doors also gets a large bottleholder. Shifting focus to the middle row, the first thing of note is how wide the large doors open; ingress-egress is really convenient. Occupants will also take readily to the large windows that offer a great view out, and thanks to slightly raised, theatre-like seating, frontal visibility for second-row passengers is also good. Renault has built in a lot of flexibility for middle row passengers. The seats split 60:40, can be slid back and forth and the backrest angle is adjustable as well. There's fair legroom with the seats in their middle setting but with the seats pushed all the way back, there's a surprising amount of room in the little Renault. You can really sit back and relax in the Triber. That said, the middle row works best for two. Seating three large adults will be a bit of a squeeze. The middle row seats are comfy, and, despite the lack of contours, they offer a good level of support at the back and thighs. Renault has also done well to include a blower control for the rear section of the cabin. The second-row vents at the B-pillars and third-row vents on the roof did help cool the cabin reasonably effectively on our test drive on a hot and humid day in Goa. 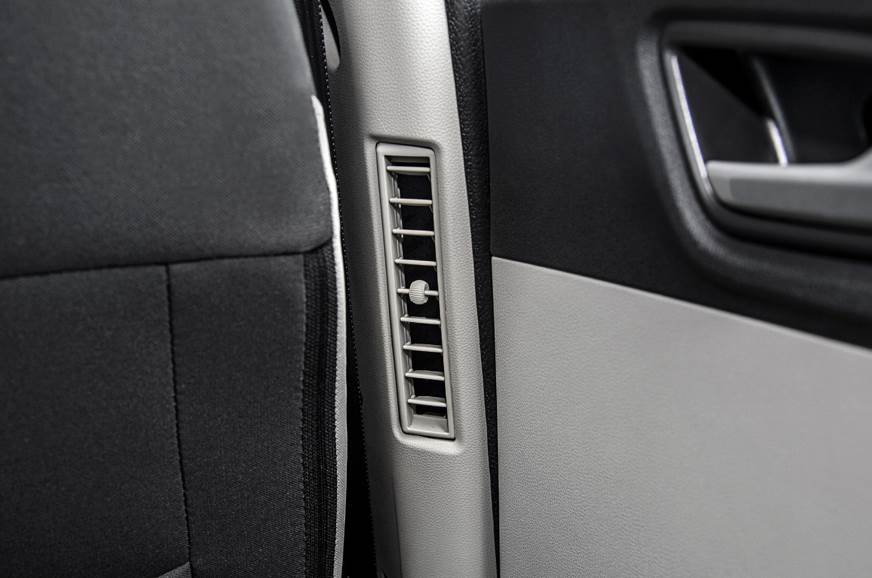 Over to the third row, and this is where the Triber truly impresses. For one, access to the rear-most seats is actually quite good as three-row vehicles go. Flipping the Triber's kerb-side middle row seat forward is a straightforward operation, and with the seat out of the way, entry is easy. And the big surprise is space. Sure, large adults might be tight on room at the very back but three average-sized passengers can sit one behind the other in a Triber in reasonable comfort, and that's incredible when you consider the Renault is under four metres long. There's even good headroom at the back and what helps comfort are the adjustable rear headrests. You do sit with your knees up but, again, it's not as uncomfortable as other 7-seaters. Sadly, you only get static reel seatbelts at the back. What's also disconcerting is how close the rear windscreen is to your head. 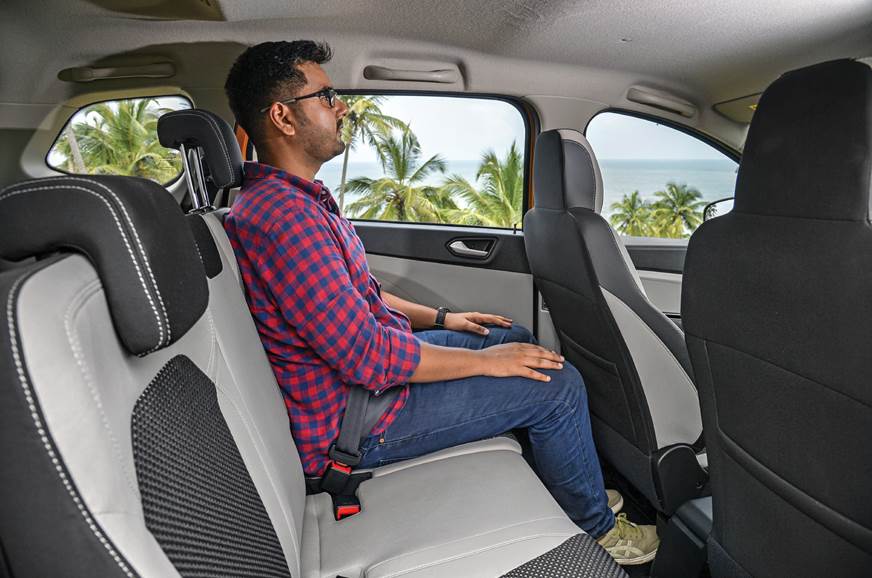 With all seats in place, the Triber offers all of 84 litres of luggage room - enough for grocery bags and the like. But you can expand the luggage room, and how.  There's an option to remove the split rear seats, and this involves a two-step process. You first have to detach the backrest and then remove the seat base; it's actually quite easy to do. With one of the last row seats removed, luggage space increases to 320 litres, and with both seats done away with, you get a cargo van-rivalling 625 litres of luggage room! In case you were wondering, the spare tyre sits under the body. 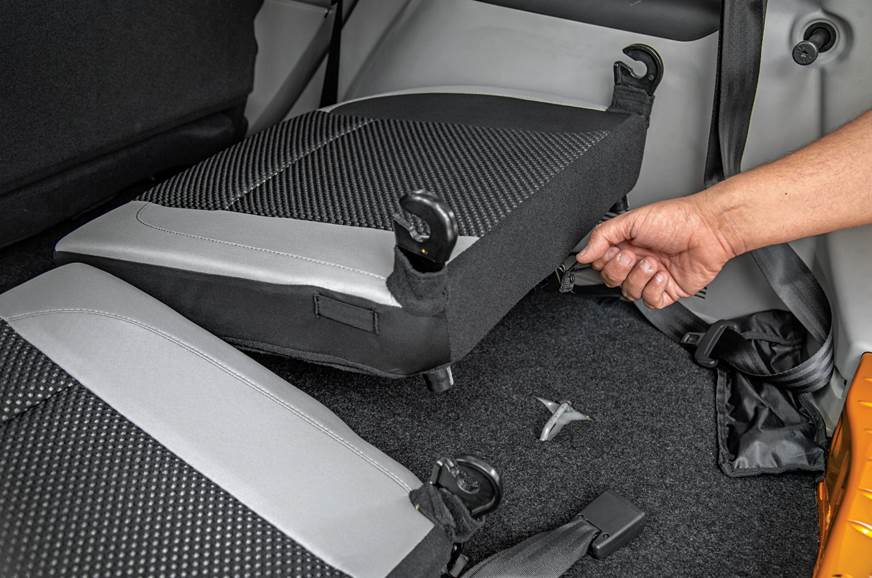 As mentioned the Triber does not get a diesel engine. The sole engine on offer for the moment is Renault’s 1.0-litre Energy engine that also powers international models like the Clio and Dacia Sandero. The engine is a development of the 999cc, three-cylinder unit from the Kwid, and gets variable valve timing on both intake and exhaust sides. It makes 72hp at 6,250rpm and 96Nm of torque at 3,500rpm. ARAI fuel efficiency stands at 20kpl. 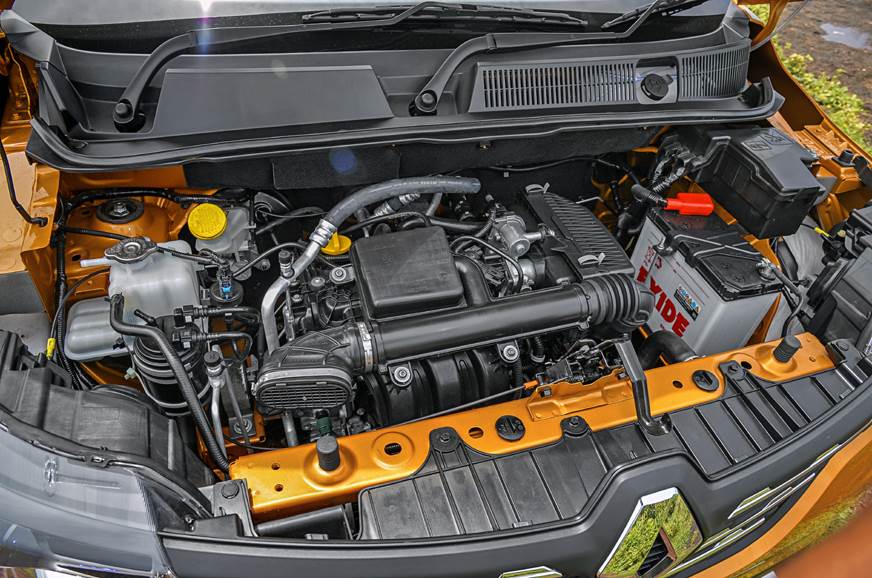 72hp and 96Nm are not shining numbers for a car that has to lug as many as seven passengers. And expectedly, performance is not sprightly. You won't have trouble keeping up with the flow of traffic but overtaking will need some prior planning. Power delivery is flat and at times, you have to work the engine to get the most out of it. With a full load of passengers - and/or on long inclines too - you have to be conscious of being in the right gear for the speed. Do so, and you'll find the Triber able to chug along quite effectively. Still, it's not an effortless cruiser and that mid-range pep is always missed. Renault is working on a turbocharged version of this engine and it could give the Triber the go it needs. An AMT auto is also coming in early 2020. The standard-fit 5-speed manual does feel a bit mechanical in its shifts, and the clutch’s high bite point also takes some getting used to. 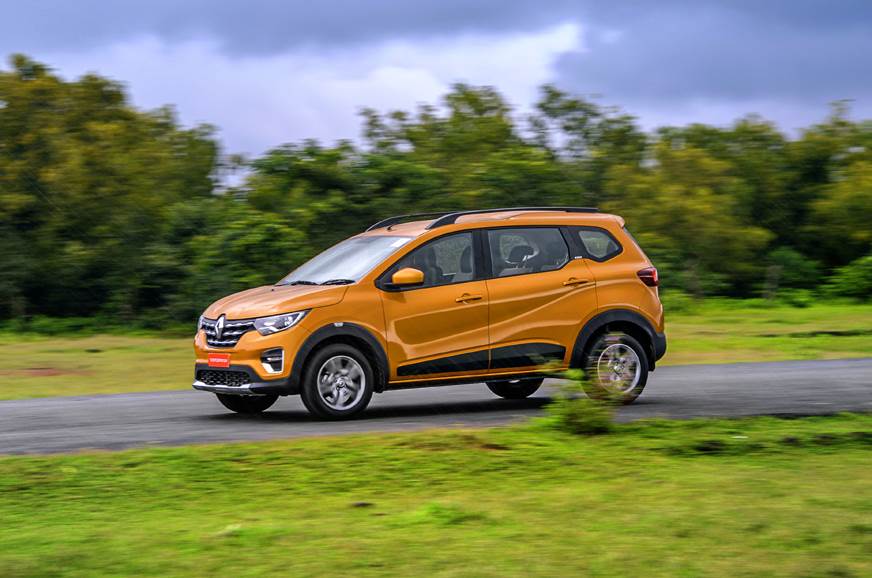 Where the Triber engine could also do better is in refinement. The engine is always audible, and sounds harsh and thrummy when extended. Listen closely and you'll also hear some whine from the transmission. On the plus side, true to Renault’s DNA, ride comfort is really impressive. Our test car's optional 15-inch tyres rounded off the bumps at low speeds really well. There is some firmness in the setup but the suspension does feel robust. Even at high speeds, the Triber drives with a sure-footedness you wouldn't associate with a sub-1 tonne (947kg, to be precise) vehicle. It feels planted and drives with maturity. The steering does seem a bit video game controller-like in its aloof feel, but it is light and easy to twirl in town.

So how much does the Renault Triber cost and where does it fit in? The Triber range starts at Rs 4.95 lakh and tops off at Rs 6.49 lakh (ex-showroom, pan-India). The pricing puts it in the heart of the traditional hatchback segment, making it all the more interesting.

The Triber is a very different take on a small car. It offers a versatility, practicality and flexibility that no other car at this price point can match. Use it as a 7-seater, a 6-seater with some room for luggage or a 5-seater with lots of room for luggage, the Triber will fit your needs really well. Yes, the 1.0-litre engine feels a bit meek but a turbocharged version is in the works and the AMT auto is also coming soon.

All said, the Renault Triber is definitely a small car that should be on your radar.