Jeep’s new version of its iconic 4X4 is both more comfortable and more capable off-road. 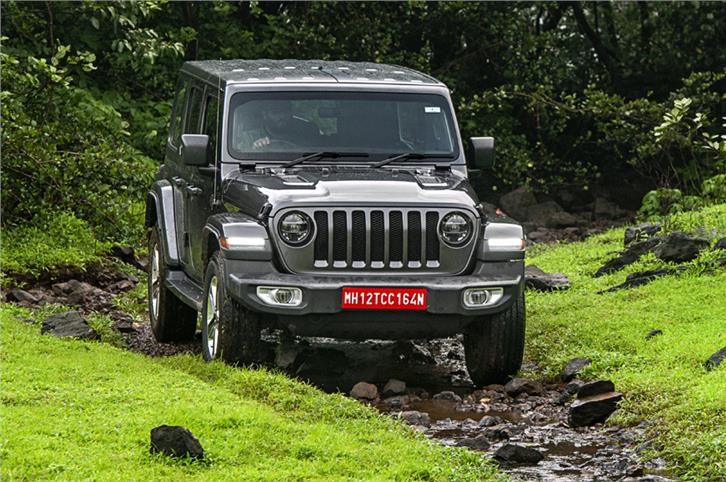 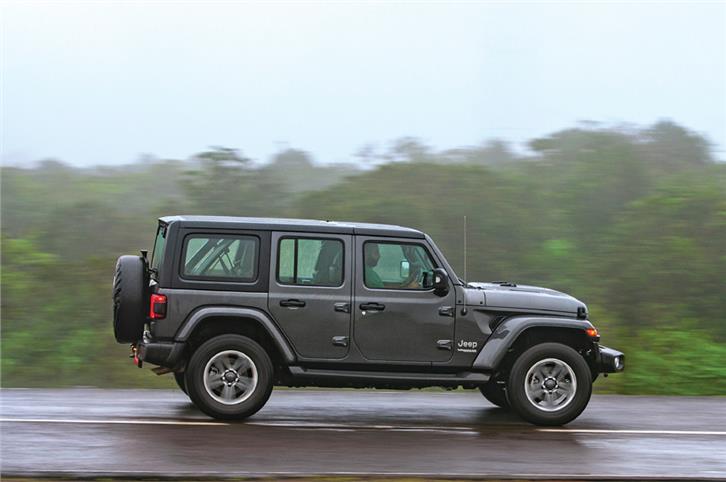 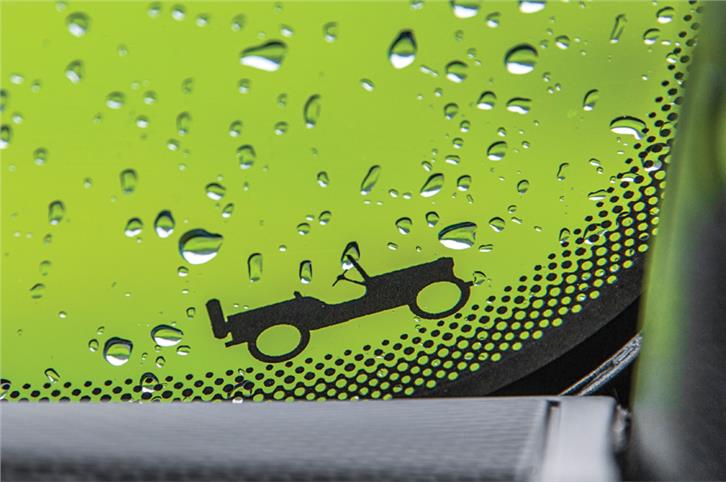 ‘Easter eggs’ like the outlines of a Willys Jeep and a pickaxe across a spade are seen all over the interior of the new Wrangler. 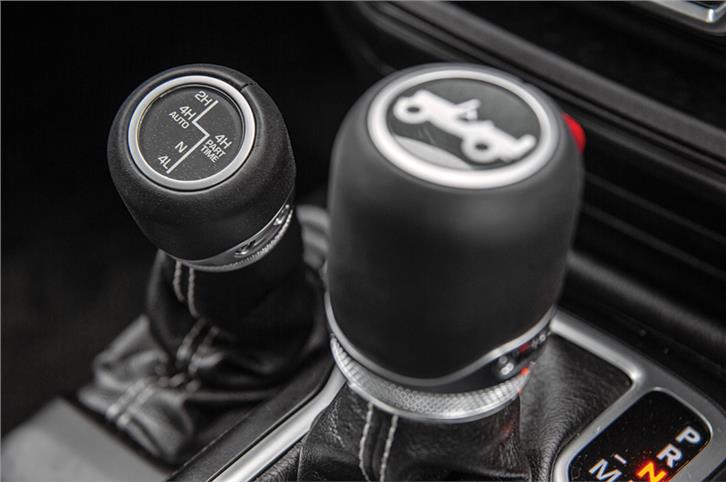 The 4WD lever sits besides the gear shifter.

Bloodlines don’t get any cleaner or purer than this. The new Wrangler JL can trace its lineage all the way back to the first mass-produced 4X4, the Jeep MB. It’s a long and sometimes fractured lineage, but draw a straight line through to this new one you certainly can. Of course, the Wrangler is an off-roader to the core, so job number one involves leaving the tarmac.

As we pull off the road and onto a trail, the Wrangler immediately feels at home. And boy, am I glad to have a good, old-fashioned four-wheel-drive selector lever. It gives you a proper old-school reassuring ‘thunk’, ensuring that the transfer case has been engaged. No electronic gimmicks here! Also, you can actually shift from two-wheel drive to four-wheel-drive high on the move, up to 72kph, and, as always, four-wheel-drive low is engaged by stopping the car and engaging neutral first. 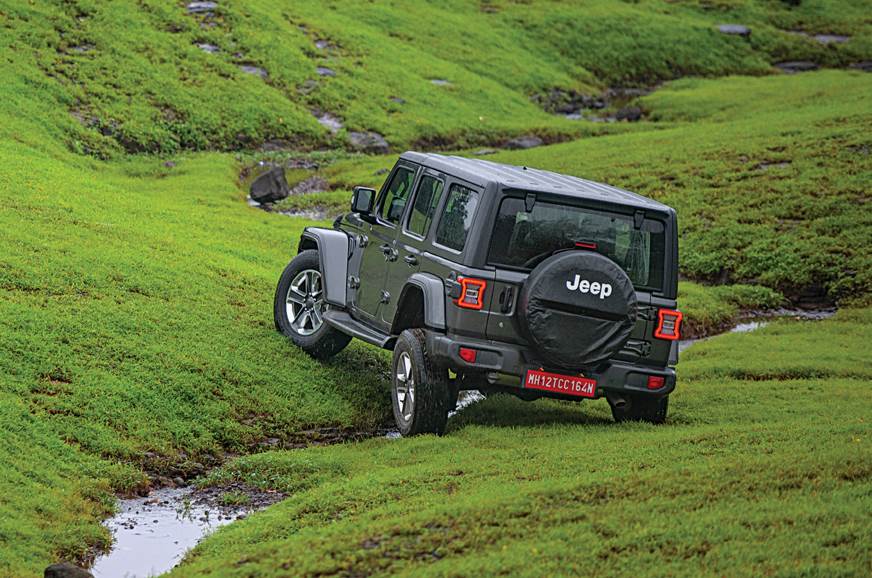 While some international versions allow you to electronically deactivate the sway bars for extra articulation, the India-spec Wrangler does not get that function. But with all that torque – a 2.72:1 ratio final drive on the 4WD-low – the Wrangler pretty much goes where you point it. It has an approach angle of 41.8 degree, a departure angle of 36.1 degree and a break-over angle of 21 degree. This means you can get it into and out of some pretty steep ravines. While on paper the 215mm of ground clearance might feel too little for a hardcore off-roader like the Wrangler, one must remember that this figure is measured using a loaded vehicle. As a matter of fact, the Jeep we get in India is rated at 242mm in international markets. So the last thing you have to worry about are speed-breakers or, for that matter, dividers.

Jeep’s iconic skull grille on the Wrangler is barely altered. The seven-slat unit is now no longer flat; it’s slightly angled, but the look, in essence, is still just the same. A lot more aerodynamic than the one on the previous-generation model, it now features cut-outs for the headlight, a feature that harks back to the CJ5 Jeep from the mid-50s. But while on the CJ5 the slot was functional (to fit larger headlamps), in the case of the JL, it is a rather cool design feature. 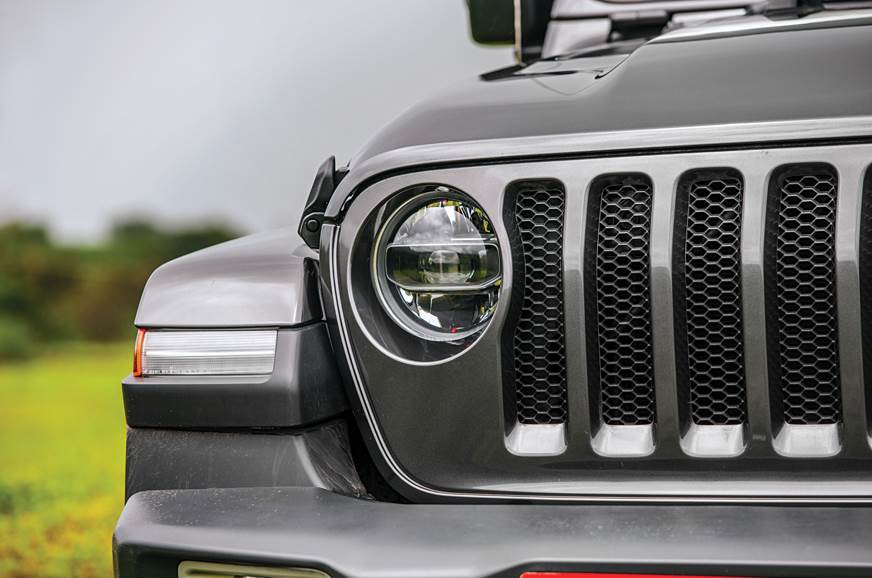 The CJ5-inspired grille is flanked by LED headlamps.

The fenders on the Wrangler, a vital part of the look, are larger this time around and are designed to take larger tyres. They are vented – a first-ever feature for a Wrangler – and the vents are actually functional, providing added cooling to the engine bay. The India-spec Jeep Wrangler Unlimited also offers a bulged and vented bonnet that adds even more muscle. And then there are the large 18-inch wheels that get a set of 255/70 R18 hybrid multi-terrain tyres that fill up the arches. If you are an avid off-roader, that translates to a tyre with a 32-inch diameter and while the earlier Wrangler could take a very slight upsize, the new JL can take up to a 35-inch tyre setup on the stock body and fenders, without any modifications.

Other typically Jeep design bits still remain, like the exposed door hinges, and yes, the doors on the JL can be removed too. The India-spec car also gets the manually removable three-piece hard top as opposed to the new electric soft top that we think should have been offered to add to the appeal of the Wrangler. You can even fold the windscreen down onto the bonnet as you could in the older-gen Jeeps, which is just brilliant when you are driving off-road; the windscreen itself has been raked by a few degrees in order to give the JL slightly better aerodynamics.

Move to the rear end and the first thing you notice are the new LED tail-lamps with a rather cool squared-off lighting pattern. And again, keeping true to its heritage, the tail-lights are mounted on the body work, instead of being integrated into it. The Wrangler also gets a parking camera mounted onto the rear spare wheel, along with a floating third brake light. 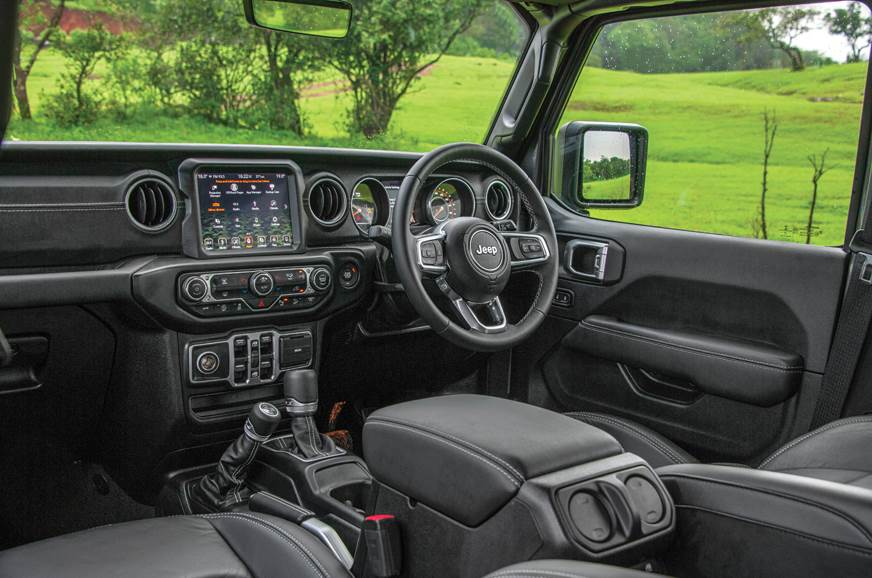 The new Wrangler’s interior is now much better put together.

While the exterior updates have been evolutionary, the updates on the interior are certainly more prominent. For starters, the interior is now much better put together as compared to the previous generations. The leather-wrapped dashboard is nicely contoured while still being flat-ish, reminiscent of Jeep’s past, and the car we drove had quite a well-laid-out white stitch pattern across it. The same black leather and white stitch pattern continues across the seats too. While some hard plastics are still visible, everything looks like it can handle the wear and tear that these cars ought to take in the long run. We also particularly like certain details such as the Allen bolts that hold the centre console together, and the red accent on the switch to engage the gear selector lever. 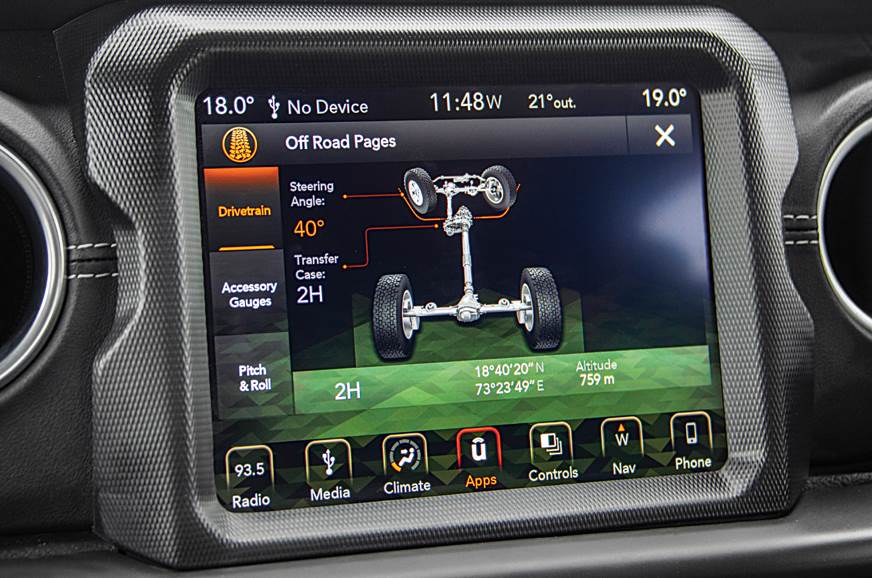 But the big update on the interior has to be the new 8.4-inch touchscreen. Not only is the high-resolution screen a lot larger, it is also a lot more responsive and packs in features like Apple CarPlay, Android Auto and inbuilt navigation too. A section called Off-Road Pages shows data on the steering, pitch and roll angles, and a few critical engine gauges. The new instrument cluster, with the large centrally mounted LCD screen, is very crisp and the gauges too use bright colours and are easy to read. The Wrangler also continues to get the power window switches on the centre console. And to add to the creature comforts, Jeep has added in dual-zone climate control, cruise control and a punchy 552W audio system. 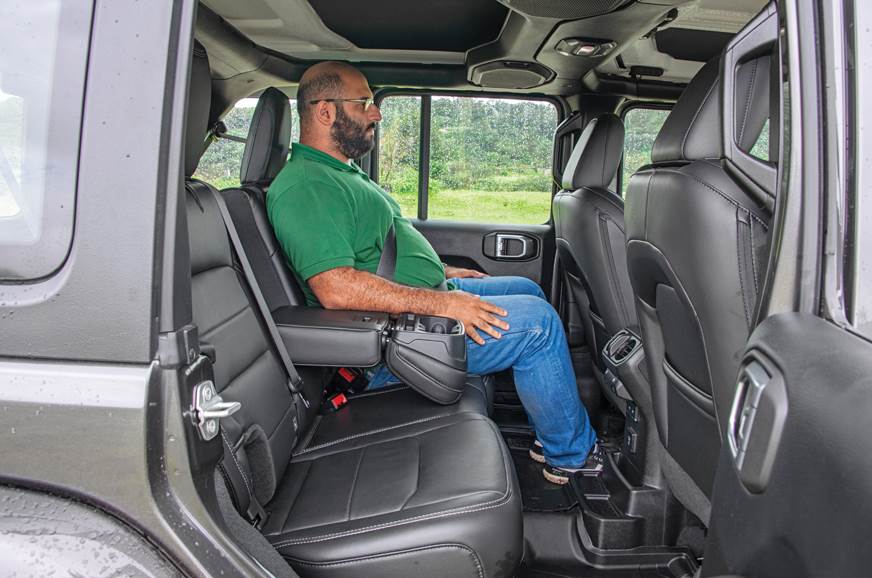 While the Wrangler’s interior is quite spacious, legroom for the driver is a matter of concern, especially if, like me, you have large feet and size-13 shoes. And what’s even more annoying is the lack of a dead pedal. This tight leg space is mainly because of the huge transmission tunnel. That said, space for rear passengers is more than adequate, though the much smaller door at the back does mean ingress and egress is a slight task. And the seat is small, low and flat. It’s not a car you’d want to be chauffeured around in, but think about it – wouldn’t it be cool?

The new Wrangler is more comfortable and nicer to drive than the previous generation. Firstly, you only get a 2.0-litre turbo-petrol, which replaces the 3.6-litre V6. And while power has dropped from 284hp to 268hp, the torque figures have dramatically increased from 347Nm to 400Nm. Peak torque is also available much lower in the engine’s rev range, at just 3,000rpm, as compared to the earlier 4,100rpm. This means more usability on the road and a less stressed-out engine while off it. The new engine is mated to a new 8-speed gearbox and the difference in the way it goes through the gears is immediately noticeable – quicker, smoother and with less power loss between shifts. Plant your right foot on the floor and the Wrangler hesitates for a split second before the boost comes in, propelling you forward. In fact, the rate of acceleration in itself is quite surprising, and it pins you against the back of your seat. 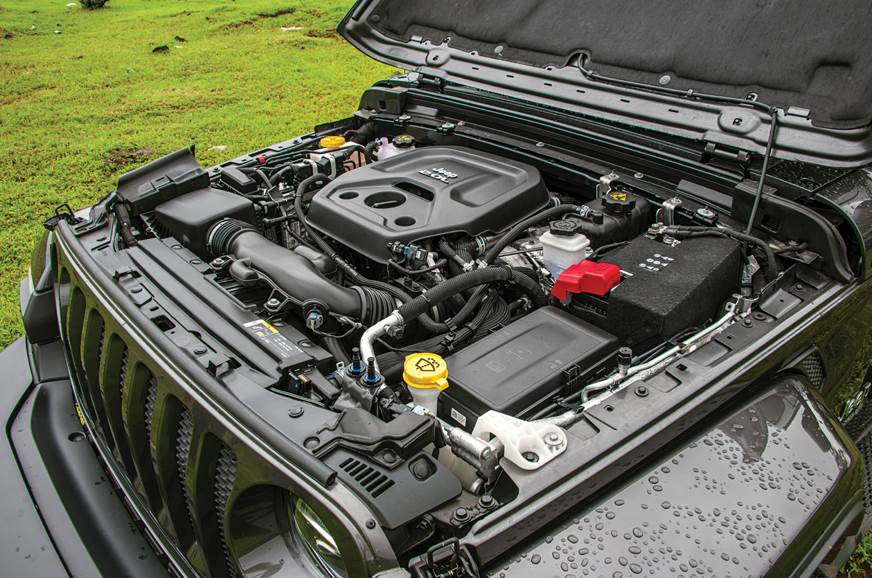 The 2.0-litre turbo-petrol pulls well from even low engine speeds.

While power delivery is impressive, the way the Wrangler handles on the road is compromised by the tyres. The front end feels light, the steering is slow to respond and this Jeep clearly doesn’t enjoy carving corners. The disconnected and vague drive feel of the previous-gen Wrangler steering, however, has been replaced by a much more planted feel. The suspension too has been retuned. While you can drive through Maruti 800-sized holes without a care in the world, and the ride is much better than the previous-gen Wrangler, ride quality still isn’t ideal. Sure, it absorbs bumps well, and on a bad road, nothing really feels as invincible, but there is still a fair amount of bounce over uneven surfaces, and this isn’t very comfortable.

So there you have it. The new Wrangler looks nicer and has a much better put together interior with a lot more features. And then there’s the fact that it’s now more refined and nicer to drive on the road too. While some people might be put off by the Rs 63.94 lakh price tag, it does exert considerable pull on those who like hardcore off-road driving. This, after all, is one of the best off-road vehicles in the world, if not the best. Would we have one? In a heartbeat. It’s just so real and has so much character. 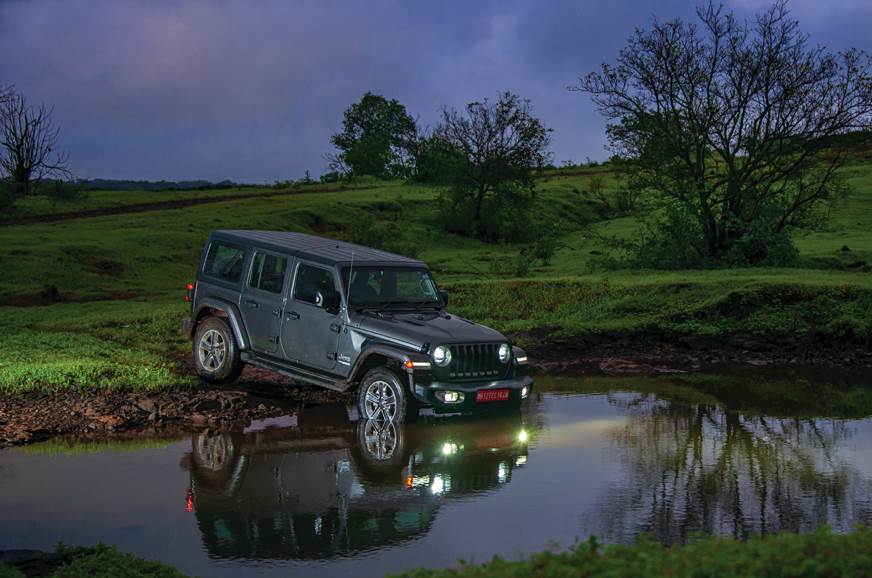 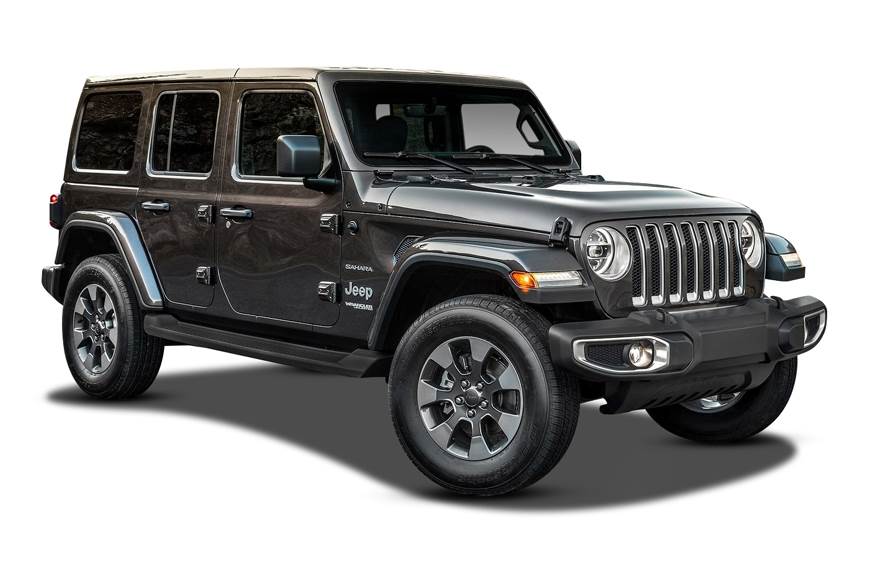 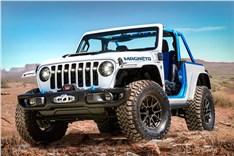 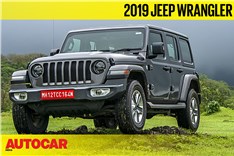 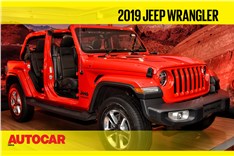 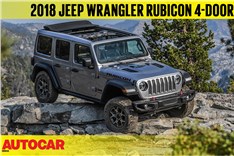 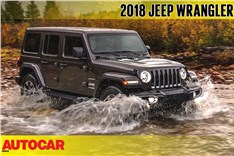