Tata’s compact sedan gets the JTP treatment and is quite the sport. 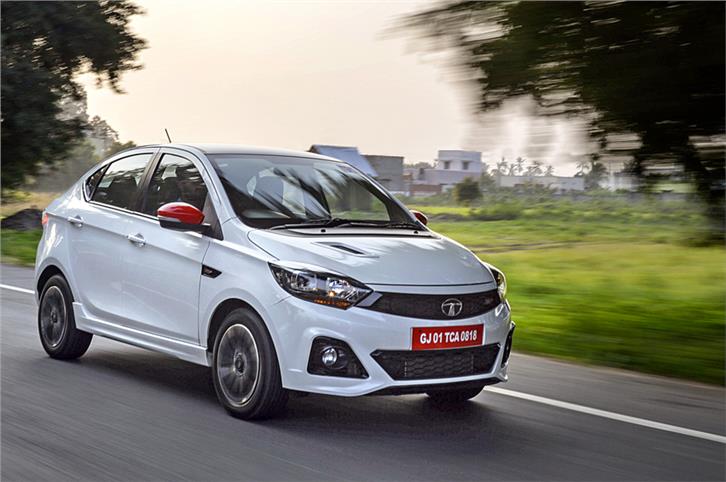 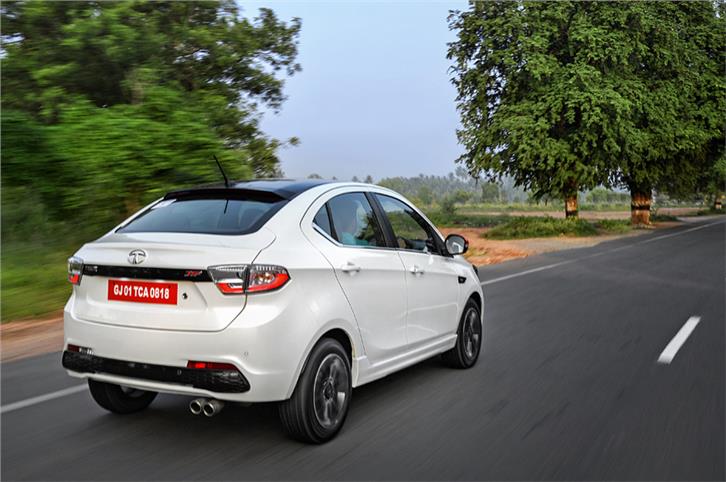 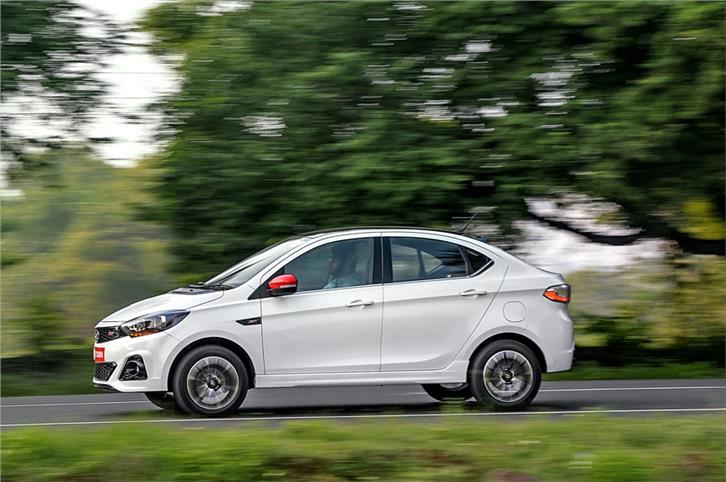 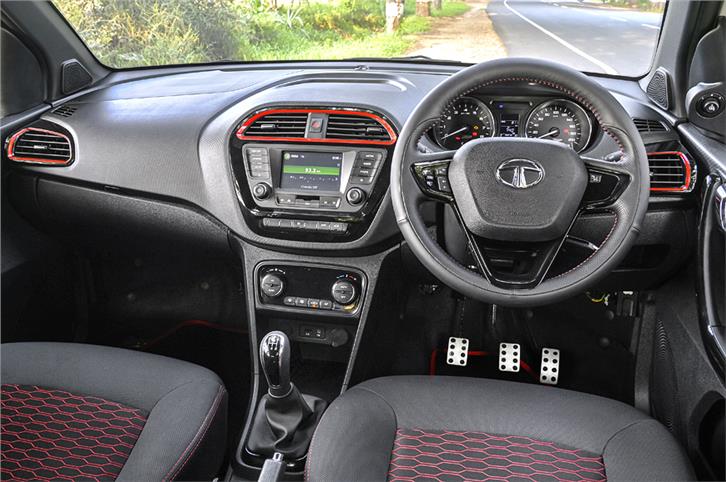 What is it?
Think of the Tigor JTP as a Tata Tigor with a whole lot more spice. Along with the Tiago JTP, the Tigor JTP is the first of the products from JT Special Vehicles or JTSV – a joint venture between Tata Motors and Coimbatore-based Jayem Automotives that is big in the business of racing. In its transformation from mainstream Tigor to racier Tigor JTP, the compact sedan has been upgraded with a more powerful engine, an enhanced suspension and sportier details outside and in. And as you’ll learn, it all comes together very well.

What’s it like on the outside?
The stylish and distinctive Tigor was already a good base to build upon; the JTP’s styling package brings in the right dose of sportiness. There’s a new front bumper, the grille gets a new honeycomb mesh and there’s even a vent on the bonnet that actually does the job of channeling hot air from the engine compartment. The projector headlights from the updated Tigor also help the look.

At the sides, it’s the faux air vents (with JTP badging), side skirts and unique design of the 15-inch wheels that distinguish the JTP from the more everyday versions. Also unique to this version of the Tigor is its blacked-out roof and contrast mirror casings. Note, the Tigor JTP is only available in white and red body colour options. A faux diffuser on the rear bumper and a dual barrel exhaust round off the Tigor JTP’s slick visual upgrade.

What’s it like on the inside?
In keeping with the JTP’s sportier bent, Tata Motors and Jayem have jazzed up the Tigor’s cabin too. While there is no change to the basic design of the dashboard, the new colour theme does make the cabin look sportier than the standard Tigor’s. The JTP’s cabin is predominantly an all-black affair with bits finished in red adding the requisite splash of colour. Of the elements finished in red are the air-con vents, the lining for the floor carpets and the stitching on the seats and steering.

More form-fitting front seats would have been nice but no complaints for the chunky, leather-wrapped steering that feels great to hold. In fact, most of what you touch is nicely finished – save for the drilled pedals that seem a bit flimsy, and there’s still room for improvement in terms of panel fit. A cool detail borrowed from other Tata cars and the most apt here is the rev needle that glows red in the upper reaches of the rev range.

Just as on the standard Tigor, there’s a good deal of space in the back for two adults, and there’s also enough room in the boot for large suitcases. The Tigor JTP is reasonably well-equipped too with dual airbags, ABS, auto climate control and a 5.0-inch touchscreen. Just wish the touchscreen was slicker in operation and came bundled with Android auto and Apple CarPlay.

What’s it like to drive?
The changes to the exteriors and interiors are all well and good but the real talking point on the Tigor JTP is its upgraded mechanical package. The Tigor’s naturally aspirated 1.2-litre three-cylinder engine has made way for a 1.2-litre, three-pot turbocharged unit. It’s the same engine that powers the Nexon SUV, albeit with a few revisions on the intake and exhaust to help it make slightly more power. On the Tigor JTP, the engine punches out 114hp at 5,000rpm and 150Nm at 2,000-4,000rpm; that’s quite a step up from the standard Tigor petrol’s 85hp and 114Nm. Tata and Jayem have also reworked gearing on the five-speed gearbox in the interest of better acceleration.

While we are yet to verify Tata’s claims of a 10sec 0-100kph time for the Tigor JTP, there’s no disputing that this is a fun car to drive. The engine won’t race to the 6,000rpm limiter and you won’t get a surge of torque even when the turbo comes on strong around 2,500rpm, but there’s enough performance on tap to satisfy the petrolhead in you. There’s plenty of poke in the mid-range and it is genuine fun working the smooth-shifting gearbox to keep the engine on the boil. Sound effects come by way of the thrum from the three-cylinder engine and you’ll even hear a hiss from the turbo’s blow-off valve every now and then. More volume would have been nice but Tata Motors simply couldn’t go louder to keep within noise regulations.

Even though it lacks the bottom-end pep of a Maruti Suzuki Dzire, the Tigor JTP feels fine in town too. We did find the power delivery a bit jerky in low speed settings perhaps down to snappy fueling. Also City driving mode that restricts torque to 115Nm is fine for its intended purpose only. To see the Tigor JTP in the best light, you need to switch to Sport mode that gives access to all of the engine’s power.

Engine aside, the Tigor JTP also gets a revised suspension. Ride height is down by 15mm, the dampers have been optimised and there’s new rubber too. Interestingly, engineers say it’s the new tyres (from MRF and Apollo) that have made the biggest difference to the Tigor’s handling. The JTP generally feels keener around the bends. There’s loads of grip from the tyres, turn-in is that little bit sharper, and the added weight to the steering also helps you work a greater connect with the car. We also noted the Tigor JTP that has a 50mm longer wheelbase feels more poised and surefooted than the Tiago JTP, both on fast straights and through the corners. Low-speed ride comfort is just as good as the standard Tigor.

Should I buy one?
Where the standard Tigor undercuts its competition by a significant margin, the Tigor JTP’s Rs 7.49 lakh (ex-showroom, Delhi) price tag puts it in the heart of the compact sedan segment. Sure, the Tigor JTP stands out from the crowd for its sportiness but in a segment that’s lead by models that are big on practicality and efficiency, we fear the fun-to-drive Tata might not get the attention it deserves. And that would be a shame because the Tigor JTP injects much-needed flavour into the segment. It’s a car that addresses the needs of a family car buyer as well as the keen driver with equal ease.

That being said, we’d happily forego the Tigor JTP’s added boot space and roomier rear seat for the Tiago JTP. And save a cool Rs 1.1 lakh in the process.