The new BS6-compliant, 1.0-litre TSI engine in the Vento has an ARAI-rated 17.69kpl mileage figure when paired with the 6-speed manual gearbox. 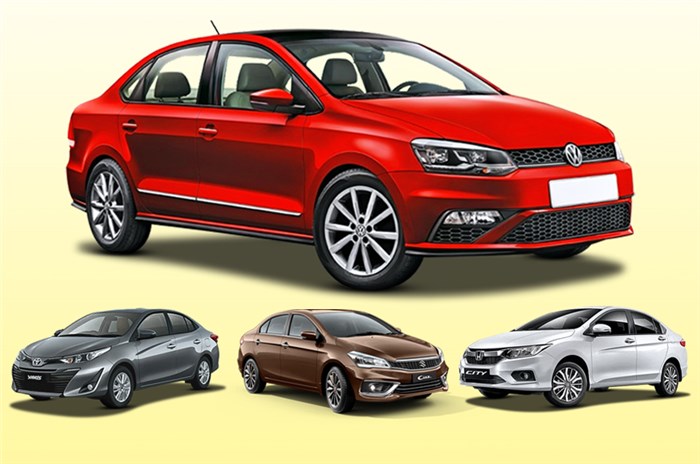 The Volkswagen Vento has entered the BS6 era with an all-new 1.0-litre turbo-petrol engine. This unit is shared with higher versions of the BS6 Polo and the upcoming Skoda Rapid. Gone are the previously offered 1.5-litre TDI diesel, 1.6-litre MPI petrol and 1.2-litre TSI turbo-petrol engines.

The BS6 Vento’s 1.0-litre TSI unit puts out 110hp and 175Nm of torque and can be had with either a 6-speed manual or 6-speed torque converter automatic gearbox. When paired with the manual transmission, the BS6 Vento TSI is rated at 17.69kpl by ARAI. This is a large, 1.6kpl improvement over the BS4-spec Vento with the 1.6-litre naturally aspirated petrol engine, which had an ARAI rating of 16.09kpl. While we are yet to get our hands on the fuel-efficiency figures for the BS6 Vento automatic, expect it to be less than the BS4 Vento 1.2 TSI – which came paired with a 7-speed dual-clutch automatic unit – rated at 18.19kpl.

Now, let’s see how the Vento 1.0 TSI compares with other BS6-compliant midsize sedans such as the Hyundai Verna facelift, the Maruti Suzuki Ciaz, the Honda City and the Toyota Yaris in terms of fuel efficiency.

When comparing the manual versions of these BS6 midsize sedans, the Vento 1.0 TSI sits right in the middle of its competition, trailing behind the naturally aspirated Verna by a 0.01kpl margin. In manual and auto form, the Maruti Suzuki Ciaz leads in terms of mileage. The Ciaz’s segment-leading figures are helped, in no small part, by Suzuki’s SHVS mild-hybrid system. The Yaris is the least economical manual sedan here, followed by the Honda City.

Among the automatic models the Toyota Yaris, for now, sits at the bottom of this table. However, this may change when we find out the BS6 Vento automatic’s ARAI mileage; torque-convertor units are generally less efficient than CVT units.

It should be noted that between the two cars that have forced-fed engines – the Vento and the Verna turbo – the VW has the higher torque figure while the Hyundai has the upper hand in terms of peak power. However, the 120hp Verna only comes with a 7-speed dual-clutch automatic transmission. With an ARAI-rated 19.52kpl the Verna turbo is also the second-most efficient automatic here.

Volkswagen has priced the BS6 Vento 1.0 TSI in the range of Rs 8.86-11.99 lakh for the manuals and at Rs 12.09-13.29 lakh for the automatics. This comes across as being competitive, seeing as the BS4 Vento was priced on the higher side for its segment. The BS6 Vento is not as expensive as the Honda City and Toyota Yaris at the top-end; but it isn’t as affordable as the Maruti Ciaz. In fact, BS6 Vento prices are comparable to the prices of the Verna facelift, though the latter does seem to get some more kit.

The Ciaz makes the best value-for-money case, as it is the most fuel efficient and the most affordable in this comparison. The new Verna is priced competitively too, and now also provides the option of a sporty 1.0-litre turbo-petrol powertrain to compete with the Vento, something that is sure to excite enthusiasts.

The competition in the midsize sedan space is set to get even more fierce, as Honda gears up to introduce the next-gen City in the coming months. The fifth-gen City will debut a new 1.5-litre, twin-cam engine and this may give it an edge over rivals in terms of power, torque and fuel-efficiency.