The 7-seat version of the Tiguan will replace the 5-seat SUV in VW India’s line-up; to come with a 190hp, 2.0-litre turbo-petrol engine. 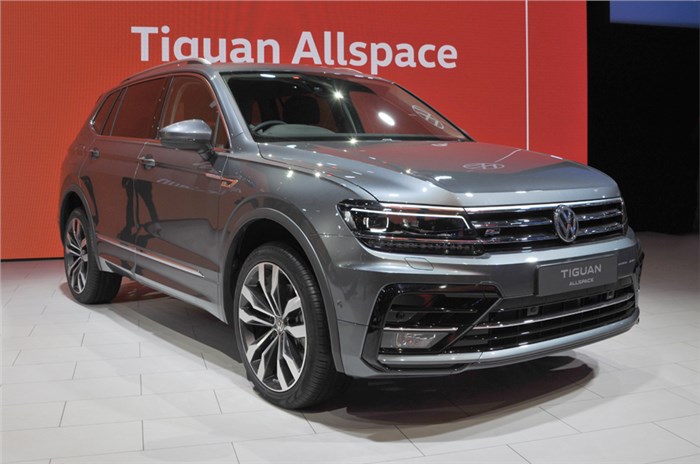 When it arrives, the 7-seater will come with a 190hp, 2.0-litre turbo-petrol engine rather than the current Tiguan’s 143hp, 2.0-litre diesel mill. This is in order to adhere to the VW Group’s plan to eschew diesel engines in India in the short term. The engine will be paired with a 7-speed dual-clutch automatic gearbox that’ll power all-four wheels via VW’s 4Motion system.

As we had reported earlier, the Tiguan AllSpace will be a well-kitted model – full-LED headlights with DRLs, a panoramic sunroof, full-digital instrument cluster, 3-zone automatic climate control, beige ‘Vienna’ leather seats, keyless entry and a touchscreen infotainment system will be standard. Safety kit will include seven airbags, ABS, ESP, a tyre pressure monitoring system, and a rear parking camera.

While the interiors of the new 7-seater will be quite similar to the outgoing 5-seater, the additional 110mm available in the wheelbase and 215mm of length has enabled the addition of the third-row of seats.

Compared to the 5-seat Tiguan, which is currently priced between Rs 28.15-31.54 lakh, the 7-seater is expected to cost a bit of a premium due to its CBU status. Expect Volkswagen Tiguan AllSpace Prices to be in the Rs 35-40 lakh region, which will mean it will directly take on the likes of the Skoda Kodiaq (Rs 32.99-36.79 lakh).

Volkswagen Taigun: What to expect from VW’s Creta, Seltos rival