Seven-seat SUV to get a panoramic sunroof and beige leather upholstery; expected to be priced in the Rs 35-40 lakh range. 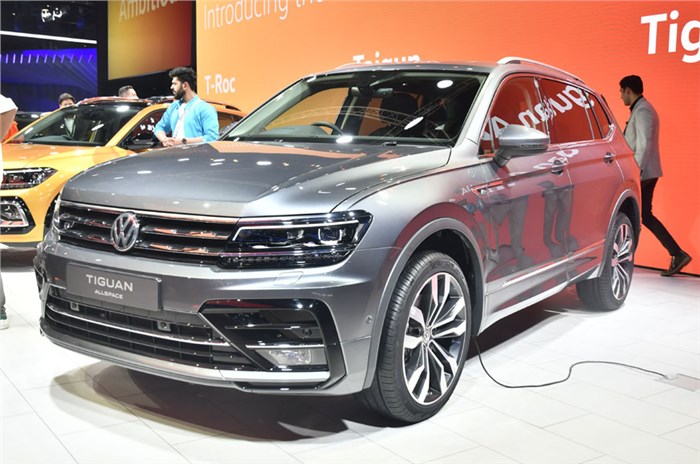 The Volkswagen Tiguan AllSpace made its debut in India at Auto Expo 2020, ahead of its launch in the coming months. The 7-seat version of the SUV will replace the current 5-seat Tiguan that’s on sale in India for Rs 28.15-31.54 lakh (ex-showroom, India). Given below are some of the features that will be on offer with the Tiguan AllSpace.

The 7-seat Tiguan AllSpace ditches the 5-seat Tiguan’s 143hp, 2.0-litre diesel engine for a 190hp, 2.0-litre turbo-petrol motor. It will be coupled with a 7-speed dual-clutch automatic transmission as standard and will send power to all four wheels via VW’s 4Motion system. In order to accommodate the extra row of seats, the AllSpace has a 110mm longer wheelbase and is, overall, 215mm longer than the standard Tiguan.

As is the case with VW’s T-Roc SUV, the AllSpace too will be brought down as a CBU. Bookings for the SUV have been opened according to a dealer in South Mumbai with its launch expected to take place sometime next month. However, prices will be on the higher side, given that it’s a full import. Expect the Tiguan AllSpace to cost in the region of Rs 35-40 lakh, which will see it rival the Skoda Kodiaq and Honda CR-V.