Tiago CNG will get four variants, while Tigor CNG gets two. 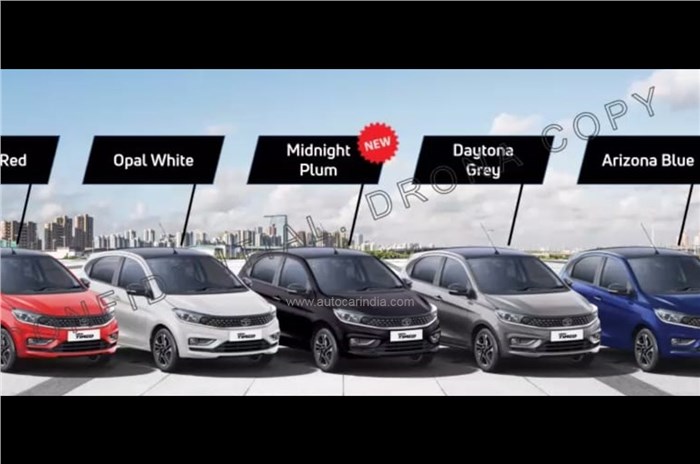 Midnight Plum is a new colour option on the Tiago XZ+.

Tata Motors has updated its Tiago and Tigor models for 2022 by adding new colour options and offering more equipment. However, both models receive the changes only on the top-spec XZ+ variants.

On the exterior, the 2022 Tiago gets a new Midnight Plum colour option which will be exclusive to the XZ+ variant. This new colour will be on offer alongside the existing Flame Red, Opal White, Daytona Grey and Arizona Blue. The updated Tiago XZ+ also gains LED daytime running lights, projector headlamps and chrome trim on the front grille, door handles and tailgate.

Inside the cabin, the 2022 Tiago gains a dual-tone black and beige theme, which is reserved only for the XZ+ variant. The rest of the range continues to get a black and grey interior theme as before.

The Tigor also gets significant changes with this update. The sub-4m sedan now comes with a new Magnetic Red colour option which is exclusive to the XZ+ variant. The new paint can also be had with a new Infinity Black Roof for a dual-tone exterior theme. Other colour options on the Tigor include Opal White, Arizona Blue, Pure Silver and Daytona Grey. Furthermore, the TigorXZ+’s 15-inch alloys are now finished in Sonic Silver instead of the dual-tone finish as seen on the Tiago.

In terms of features, the 2022 Tigor now gets rain-sensing wipers and automatic headlamps on the XZ+ trim. Other interior changes on the Tigor XZ+ include new seat fabric and a dual-tone black and beige interior theme.

Both Tiago and Tigor are powered by a sole 86hp, 113Nm, 1.2-litre, three-cylinder Revotron petrol engine. Tata offers 5-speed manual and AMT gearbox options with the Tiago and Tigor.

It’s worth noting that the Tigor also has an electric sibling, Tigor EV. With the launch of its CNG variant, the Tigor will be the only sedan in India available in petrol, CNG and electric guise.

Tata Motors has announced an average 0.9 percent hike on its passenger vehicle prices effective from January 19, depending on the variant and model. The company cited a steep rise in overall input costs for the price hike.

However, Tata Motors has decided to offer price protection to all its customers who have booked cars on or before January 18, 2022. The company said it has also reduced prices by upto Rs 10,000 on specific variants, in response to feedback from customers.

Do the additions make the Tiago and Tigor more appealing than before? Let us know in the comments.

Tata needs to offer a 4 cylinder engine for Tigor, if not the Tiago. Also, the Tigor suffers from one of the narrowest bodies in the 4 meter sedan segment. Don’t see Tigor sales increasing with these handicaps.

Tata needs to offer a 4 cylinder engine for Tigor, if not the Tiago. Also, the Tigor suffers from one of the narrowest bodies in the 4 meter sedan segment. Don’t see Tigor sales increasing with these handicaps.