Both SUVs will be built by Toyota and are expected to launch later this year. 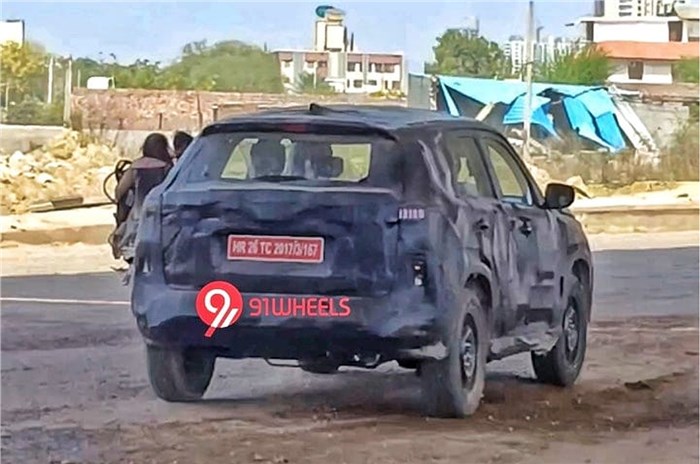 Toyota and Maruti are finally set to enter the hotly contested midsize SUV segment later this year. And their contenders, the Maruti YFG and the Toyota D22 SUVs, have been spotted testing for the first time, somewhere on the outskirts of Gurugram. We take a close look at what these spy photos reveal.

Maruti YFG, Toyota D22: What do the spy photos reveal?

The spy photos give us a view of both SUVs from various angles. While both mules look heavily covered, the front styling is partially visible and confirm their distinct Toyota and Maruti identities.

Both SUVs have a similar silhouette as the newer Toyota SUV range, which includes the Corolla Cross and the RAV4, among others. The nose, however, seems to have unique styling bits.

The Toyota D22 sports a split-headlamp design with double LED daytime running lamps positioned above the main headlamps and could be joined by a thick chrome strip similar to the ones seen on the Camry and the upcoming Glanza. The front bumper has a large airdam with honeycomb mesh design neatly positioned between the headlamps.

The Maruti YFG, however, has a different front look: it resembles the Toyota RAV4-based A-Cross SUV sold overseas. The YFG SUV also has a split-headlamp set-up but has A-Cross like LED daytime running lamps, with the main headlamps positioned below. The front grille has the same inserts that are on the new Baleno and which will also be seen on the Ertiga facelift next month. A large Suzuki logo takes centre stage on the grille.

Both models seem to have decent ground clearance, which could be around 200mm or more. On the sides, both SUVs have prominent squared-off wheel arches. The wheels look chunky as well and could have a diameter of around 17 inches. Toyota's version can be seen with steel wheels, while the Maruti derivative seen here has alloys.

We expect both SUVs to come with a large touchscreen system, a plethora of safety features, a long list of creature comforts, among plenty of other features.

As we've reported earlier, both models are new from the ground up, built on a new architecture based on a Daihatsu-sourced modular platform called DNGA. The DNGA platform, designed by keeping emerging markets in mind (not to be confused with the more premium TNGA platform of the Camry), underpins a number of Toyota and Daihatsu models overseas.

The two SUVs will be launched in quick succession, just before Diwali this year. As far as powertrain goes, these two midsize SUVs will use strong hybrid tech, similar to what’s found in the Camry, which means they will be able to run on electric power alone for a short distance.

What are your first impressions from these spy photos of the upcoming Toyota and Maruti SUVs? Let us know in the comments below.