Upcoming City Hybrid to get Honda Sensing tech in India

Tech-laden City hybrid will also have an upper hand in the segment with the Honda Sense bundle of safety features. 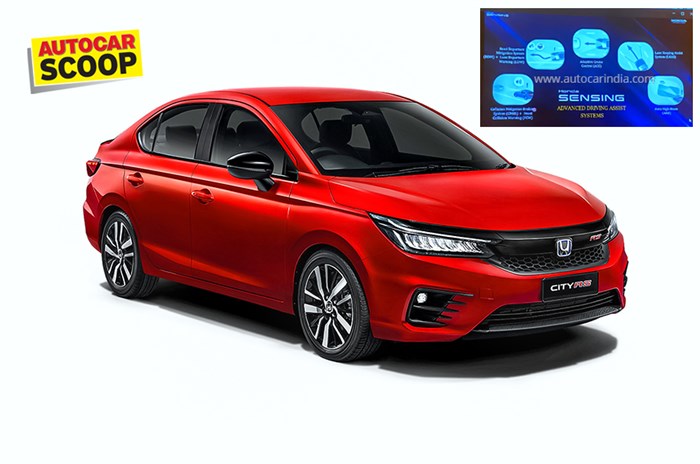 Honda India is gearing up to introduce the much awaited City Hybrid in our market in the coming months. The City Hybrid was slated to launch more than a year ago but the car's India entry was delayed due to COVID-19 related lockdowns and production delays.

Apart from the full-hybrid powertrain, Honda will also introduce the Honda Sensing technology on the City Hybrid. Honda Sensing tech is essentially a bundle of multiple active and passive safety systems that are not offered currently on any Honda car or SUV in India. While some of these features have been available on Honda cars and SUVs overseas since sometime, we can confirm that the City Hybrid in India will come with Honda Sensing features like lane departure warning system, adaptive cruise control, lane keeping assist, auto high beam assist, emergency braking and front collision warning system.   Additionally, the City Hybrid will come with almost all safety features seen on the standard City, which includes six airbags, ESP, ABS, among others.

Honda City Hybrid for India: What all is known?

The City is Honda’s oldest nameplate in India and has been a strong pillar for the brand here. Honda has recently begun exporting LHD version of the City to countries like Mexico and Turkey. Adding a hybrid variant to the City line-up in India will not only help Honda stay on the top of the game with segment-leading hybrid tech, but could also prove an important selling point for dealers to appeal to safety-conscious customers, thanks to the addition of Honda Safety Sense.

The City hybrid comes with Honda’s i-MMD, the hybrid technology that is also used on the international-spec CR-V hybrid and in the new-generation Jazz sold abroad. Like the technology that powers the Honda Jazz e:HEV for international markets, the i-MMD hybrid set-up in the new City is made up of two electric motors and an internal combustion engine. A 98hp, 127Nm, 1.5-litre, four-cylinder, naturally aspirated Atkinson Cycle petrol engine sits under the bonnet of the new City.

The first electric motor, which is integrated in the petrol engine, assists and acts as an integrated starter-generator (ISG), while the second motor sends 109hp and 253Nm of torque to the front wheels via a bespoke gearbox with a single, fixed-gear ratio.

Thanks to this set-up, the City will be frugal in urban environs where it will just run on the electric motors, while out on the highway, the petrol engine will take over, providing much stronger performance.

The City Hybrid is likely to be the first well-specified ‘mass market’ hybrid to go on sale in India. As reported by us previously, the Honda City Hybrid delivers an impressive 27.7kpl under test conditions in Malaysia (27.8kpl in Thailand). We expect a similar figure for India as both test cycles are very similar.

We had reported earlier that Honda aims to sell around 250-300 units of the City hybrid each month, which translates to about 10 percent of the regular model’s average monthly sales figure. The automaker has set a conservative target and is not banking on large volumes, as the hybrid is expected to command a Rs 2 lakh-2.5 lakh premium over the petrol sedan. As such, the top-end variant of the City hybrid is expected to come in at around Rs 20 lakh ex-showroom.

Does the provision of active safety tech on the City Hybrid make it more appealing? Let us know in the comments below.

Yes, but Honda should not make a blunder of overpricing like it did other Hybrid cars it introduced in the past.

Yes, but Honda should not make a blunder of overpricing like it did other Hybrid cars it introduced in the past.