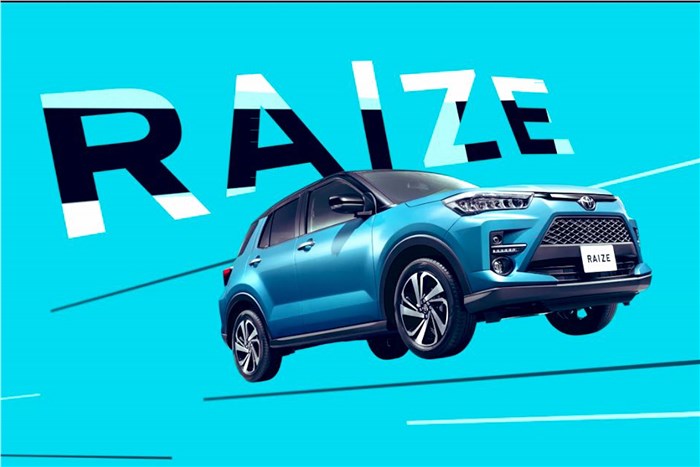 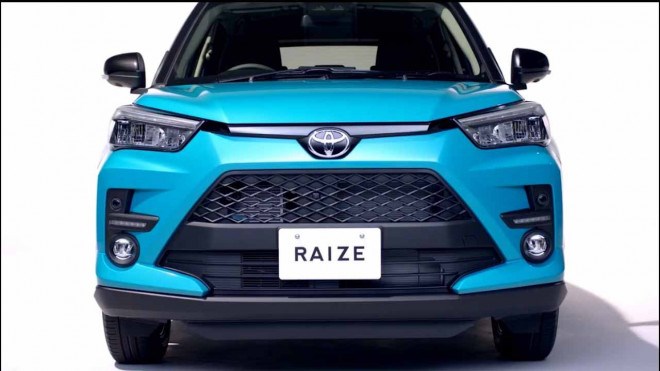 Toyota's upcoming SUV, the Raize, has seen an early reveal ahead of its official world premiere scheduled for next month. As reported by us, the new Toyota Raize SUV shares its underpinnings, body panels, engines and interior bits with the Daihatsu Rocky compact SUV that made a surprise debut last week at the Tokyo Motor Show 2019.
While there are a lot of similarities in terms of design, the Toyota Raize gets unique styling cues to differentiate it from its Daihatsu cousin.  The Raize gets a Toyota SUV-typical nose with a large trapezodial grille with mesh inserts that makes it look more like a mini-RAV4 SUV.  It gets angular housings for fog lamps and LED daytime running lamps along with a high-set Toyota logo that's placed above the grille.  The SUV shares its headlamp design with the Rocky and from the pictures it looks like the models could get LED headlamps atleast on the higher trims.
Just like the Rocky, the Raize gets chunky 17-inch alloy wheels but with a different design. Toyota is expected to offer a range of accessories for the Raize that will include different body kits and alloy wheel designs including a TRD package with sporty styling.  At the back, the Raize is expected to feature horizontally placed wraparound tail-lamps with LED inserts that are connected by a thick chrome bar, similar to the setup seen on the Rocky.  The Raize also gets a floating D-pillar and a tall bumper, with thick cladding lower down and unique contrast-black inserts that mimic the styling of the front bumper.
On the inside, the Raize will share the Rocky's dashboard design replete with faux brushed-aluminium bits on the AC vents and steering wheel. It's will get a driver-centric cockpit like centre console along with a free-standing infotainment screen, which seems to be an 8.0-inch unit. The model is also to sport the same three-spoke steering wheel as its Daihatsu cousin.
While the dimensions for the Toyota Raize are not out yet, the Daihatsu Rocky gives a clear picture of what to expect. The Rocky SUV measures 3,995mm in length, 1,695mm in height, 1,620mm in width, and has a wheelbase of 2,525mm. Both SUVs are based on Toyota’s flexible DNGA platform that is aimed at emerging markets; this platform is essentially a low-cost version of the advanced TNGA modular architecture.
Toyota will sell the Raize SUV with a 4WD variant too along with standard front-wheel drive versions for the lower trims. Under the hood, the new Raize gets a 1.0-litre, three-cylinder, 12-valve turbo-petrol engine that’s good for 98hp at 6,000rpm and 140.2Nm of torque at 2,400-4,000rpm. Gearbox choices would include a CVT initially with a six-speed manual to be added later.