They’re both identical in every way – then what exactly will the Toyota Glanza have to offer over and above what the Maruti Suzuki Baleno already does? We analyse. 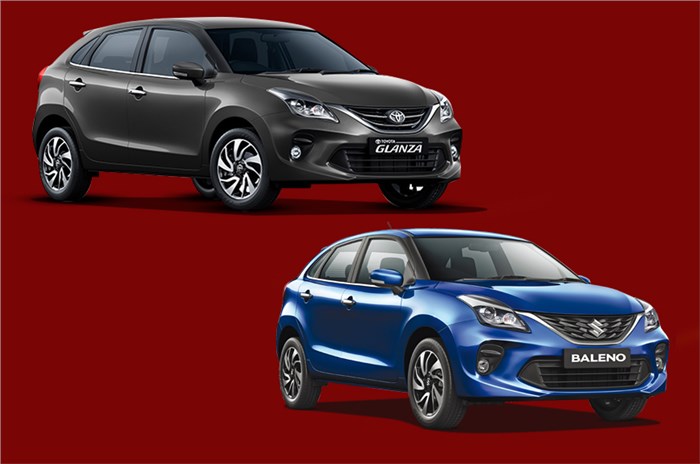 The Glanza is the first shared product to come from Toyota and Suzuki's partnership in India. While the carmakers had announced the shared models in question, what was not known was the extent to which each manufacturer would add their 'personality' to the cars. Sadly, and to the disappointment of many people, the Toyota Glanza has turned out to be nothing more than a rebadged Maruti Suzuki Baleno. Most had expected Toyota to make at least a few (if not many) changes to the Baleno to distinguish its offering in some way, but in the end, all that changed was the grille, the name, and Toyota badges replacing the Suzuki logo.

Why, then, would you pick a Toyota Glanza over the Maruti Suzuki Baleno? Are there any differences at all between the two? We’ve compared the two to answer your questions.

Glanza vs Baleno: Engines and variants

It’s no secret that the Glanza and Baleno are essentially the same car. They’re identical in terms of dimensions, so the Glanza is the same length, height and width as the Maruti, has the same wheelbase and the same 339-litre boot.  Barring the Toyota badge on the steering wheel, they’re identical even on the inside, with the same interior colour scheme and 7.0-inch touchscreen infotainment system.

The key difference is in the engine and variants department. The Baleno is available in a range of variants across price points – it starts with the base Sigma petrol, which is priced at Rs 5.58 lakh, and closes out with the Alpha petrol-CVT, priced at Rs 8.90 lakh. On the other hand, the Toyota Glanza is only be available in two high trims – G (based on the Baleno Zeta) and V (based on the Baleno Alpha), and both have the same features as the corresponding Baleno variant.

Another important point is that the Maruti Baleno offers the option of a diesel engine – at least till some time before BS6 emission norms come into effect. The Glanza only gets BS6-compliant petrol and petrol mild-hybrid versions. That said, the lack of a diesel engine likely won’t hamper the Glanza, as sales figures for the Baleno are skewed in favour of petrols by a big margin – over 80 percent of Balenos sold till date are petrols.

Besides, for those wanting higher fuel economy, the G MT variant – thanks to its mild-hybrid system – offers notably higher mileage than the standard petrol model. The Toyota Glanza’s fuel efficiency figures are rated at 21.01kpl for the V MT, 23.87kpl for the G MT (Smart Hybrid) and 19.56kpl for the CVT, which are the same as those for the Baleno.

Glanza vs Baleno: Connectivity and infotainment

The Toyota Glanza’s infotainment system has been rebranded ‘Smart Playcast’, but in effect, it’s exactly the same as the Baleno’s SmartPlay Studio unit. It gets Apple CarPlay and Android Auto, features that aren’t available on any other Toyota model in India at this time, and voice command functionality as well. That said, the Baleno gets a dedicated SmartPlay Studio smartphone app with certain specific features, something customers won’t get with the Glanza.

And speaking of apps, there’s another major difference between the Glanza and Baleno. Maruti Suzuki offers a smartphone app that goes by the name of ‘Suzuki Connect’. With the help of vehicle telematics, the app can relay real-time data about the vehicle to the owner, including vehicle tracking, geo-fencing, driver behaviour analysis, fuel efficiency report, trip details and live vehicle alerts, among other things.

In comparison, the Toyota Connect app – which Glanza buyers will be able to access – is almost barebones. It only offers navigation, a 24x7 concierge service, location-based roadside assistance and a dealer locator. The Toyota Connect services are free for the first 12 months, whereas Suzuki Connect can only be used by paying Rs 10,000 for a three-year subscription, but for someone who wants the features, Suzuki Connect is far more comprehensive in terms of what it has to offer.

Glanza vs Baleno: Price and warranty

At the launch, Toyota snuck in a surprise with the Glanza’s prices, which are introductory. While the V MT and G MT and CVT variants cost exactly the same as the corresponding Baleno variants, the Glanza G MT undercuts the Baleno Zeta Smart Hybrid it’s based on by nearly Rs 65,000. That’s a significantly lower price tag with no difference in features – the G MT is just as well-equipped as the Zeta Smart Hybrid.

Yes, there is more flexibility within the Baleno range – you could pick up a true base model in the petrol Sigma for as low as Rs 5.58 lakh, a mid-spec Delta CVT or a non-hybrid Zeta for a full Rs 89,000 less than the Zeta Smart Hybrid. Prices for the Toyota Glanza, in comparison, range between Rs 7.22 lakh-8.90 lakh (ex-showroom, Delhi), and the Glanza is feature-heavy regardless of whether you pick the G or V trim, as there is no real base or mid-spec model available.

A key differentiator for the Glanza is its longer standard warranty. The Toyota Glanza comes with a 3-year/1,00,000km warranty as standard, like what’s offered on other Toyota models in India. The Baleno, in comparison, comes with a standard 2-year/40,000km warranty. It’s in this department that the Glanza appears to be a better deal than the Baleno, especially considering the fact that Toyota is providing a more comprehensive warranty cover at no extra cost.

On the face of it, there’s little to distinguish the Toyota Glanza from the Baleno, but the Glanza G MT appears to offer better value for money than the Baleno Zeta Smart Hybrid with its notably lower price and longer standard warranty. It’s better even compared to the higher V MT variant, considering it costs Rs 35,000 less, doesn’t miss out on any key features and gets the mild-hybrid system, which makes it more fuel-efficient. It seems Toyota’s decision to not make any significant changes to the Glanza stemmed from a desire to stay competitive on the price front, something Toyota has managed to achieve.

The company has previously said it aims to add value by providing a different buying experience to the customer, and it remains to be seen how Toyota distinguishes the buying and aftersales experience for the Glanza, seeing how Maruti Suzuki has anyway added a dash of premium to the buying experience with its Nexa retail outlets – which is where the Baleno is sold from.

Would you pick the Toyota Glanza over the Maruti Suzuki Baleno? Let us know in the comments.