The most important car and SUV highlights of 2018 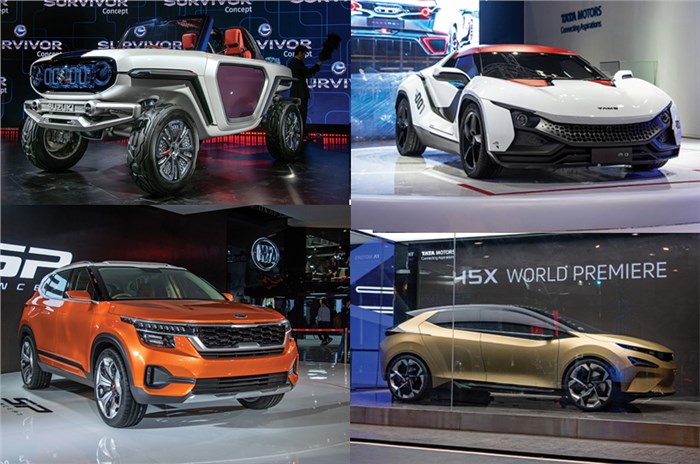 With 2018 drawing to a close, we take a look back at some of the most important and biggest events and car launches that happened this year.

a. Tata’s concepts: Tata’s stand at the expo was perhaps the most eye-catching. Front and centre were two concepts – the 45X hatchback and the H5X SUV. The 45X concept previewed a premium hatchback from Tata that is expected to launch next year. Interestingly, the production car is expected to look much the same – sharp lines, large alloys and sleek profile – considering that the upcoming Harrier SUV looks near identical to the H5X concept that was shown at the show. Also at the show was an EV derivative of the Racemo concept from 2017.

b.Kia SP concept: A very important concept at the show, the SP previewed an SUV that will be the launching platform for Kia in the country. The size of a Hyundai Creta, Kia’s production SUV is set to make its debut next year and will closely follow the styling previewed by the concept with the promise of a more up-market cabin than its rivals.

c. Suzuki e-Survivor concept: Suzuki’s take on the future of mobility, the two-seat, all-electric, open-top, ladder-frame SUV featured flashy styling expected from a concept but with more traditional driver controls – at a time when many other automakers have shifted to self-driving concepts.

2. The Ins: 2018 saw its fair share of launches from niche products like the new Rolls-Royce Phantom to mass-market sedans and hatchbacks. Here are some of the significant launches:

a.New Maruti Suzuki Swift:Perhaps the biggest launch at the 2018 Auto Expo was the new third-gen Swift. The third generation of one of India’s most popular hatchbacks has proven to be quite a success with monthly sales numbers that put it amongst the bestsellers in the country. Maruti also announced that it had received 1 lakh bookings for the new hatch in just 10 weeks. Read our road test review here.

b.Honda Amaze:The new Amaze is arguably the biggest launch for Honda this year. The second-gen compact sedan has proven to be popular among buyers with the car selling 50,000 units in five months, to become the fastest-selling Honda car in the market. The new Amaze is also a big step up from its predecessor with a better equipped cabin and a segment-first diesel-CVT option. Read our road test review here.

c.Toyota Yaris: The Yaris is Toyota’s long-awaited entry into the mid-size sedan segment. Going head to head with the Honda City and Maruti Ciaz, the Yaris has the distinction of being the only car in the segment to offer seven airbags as standard and one to not have a diesel engine option. Read our road test review here.

d.Hyundai Santro:-The much-awaited return of the brand that built Hyundai. The new Santro, now a budget hatchback, has proven to be a popular offering in the segment with buyers lining up at dealerships and waiting periods crossing two months, with the CNG and AMT models being quite popular. The Santro is also Hyundai first AMT- equipped model. Read ourroad test review here.

e.Tata Tiago, Tigor JTP: Tata’s first sporty derivatives to reach production, the JTPs offer 114hp, turbo-petrol engines along with revised suspensions, exhausts and bespoke tyres. What makes it even better is that the Tiago JTP is priced a cut under the regular hot hatches and the Tigor JTP is on par with most compact sedans.Read our review of the Tata Tiago JTP and TIgor JTP

f.Maruti Suzuki Ertiga:-Larger and more upmarket, the new Ertiga is set to build on the success of its predecessor. Based on a new platform, the MPV gets new more efficient mild-hybrid petrol and diesel engines, along with a more spacious and better equipped cabin at a price in the same ballpark as its predecessor. Now we just have to wait to see how buyers respond. Read our review here.

3.The Outs: With the ins comes the outs. New cars were launched and some old ones were discontinued and none more important than the ones below:

a.Tata Indica, Indigo eCS:-In 2018, we bid farewell to the Tata Indigo eCS, the country’s first compact sedan, and the long-running Tata Indica. The long-serving models from Tata were finally shown the door this year as automakers are preparing to welcome the more stringent emission and crash standards. The Indica has had a storied 20-year history in India being the country’s first truly indigenous car and the model that put Tata motors on the map as a private car manufacturer.

a.Quadricycles now legal:Six years after Bajaj revealed its quadricycle, the Qute (then RE60) at Auto Expo 2012, the Ministry of Road Transport and Highways approved the quadricycle as a category under the Motor Vehicles Act. While initially approved for commercial use only, private ownership has now been approved.

b. Tata Tiago, Tigor EV: At the 2018 Auto Expo, Tata showcased its two EVs with 40hp electric motors under the hood. The automaker this year signed a Memorandum of Understanding with the Maharashtra government to supply 1,000 of its EVs to the state government for official use. The automaker is also considering a phased market launch for the Tigor EV.

c.Go for retrofitment of EVs:In a claimed first, the ARAI has green-lighted a Telengana-based start-up to retro-fit EV kits into Maruti Altos and WagonRs. The start-up e-Trio Automobiles says that it has a capacity to convert 1,000 cars every month, with its kits offering a range of up to 150km on a single charge.

d.Green number plates: The Ministry of Road Transport and Highways has approved the use of green number plates on electric vehicles. The move is to make EVs easily recognisable and allow for owners to receive preferential treatment and concessions in tolls.

BS-VI-ready in 2018: Mercedes-Benz showed the way forward as it debuted its new, BS-VI-compliant diesel engine in the S-class facelift. The highlight of this new inline, six-cylinder engine was that it meets the upcoming Bharat Stage-VI emission norms even while running on the BS-IV fuel currently available in the country. It was also the first made-in-India car to be BS-VI compliant.

Safety first:2018 also saw improvements in crash safety standards of some popular models in the latest rounds of Global NCAP crash tests. While not all cars tested in the year got shining reports, stellar performers this year were the Maruti Vitara Brezza, Mahindra Marazzo and the Tata Nexon. The Brezza became the first Maruti to score a four-star safety rating while the Marazzo held the distinction of not only being the first Mahindra to get said rating but also the first India-made MPV to do so. The Nexon stood out with a full five-star safety rating ­– a first for a made-in-India car.

The most important two-wheeler highlights of 2018