Tata Tiago could get a new top-spec variant 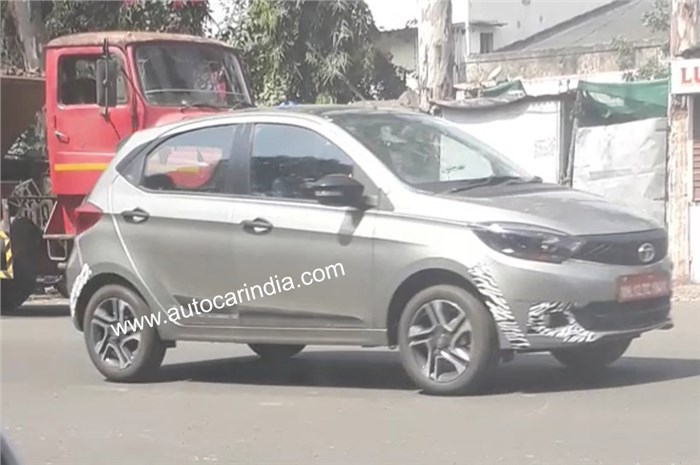 Tata Motors has been introducing updated models across its range of cars, one after the other. In the past few weeks, the company launched the Hexa XM+, the Tiago NRG and the Tigor XZ+, and is all set to bring the performance-oriented Tiago and Tigor JTP this week.

Now, it seems like Tata Motors has begun work on a new top trim for the Tiago hatchback. The spy shot of the car (seen near the brand’s plant in Pune) shows multiple cosmetic changes.

First up, the car gets 15-inch alloy wheels from the Tigor petrol. The grille and the headlights are also similar to the ones seen on the recently refreshed Tigor. The vehicle is seen in the new Titanium Grey paint shade and a contrast black roof. There are no pictures of the interior but expect mild updates to the cabin. Tata Motors could give the Tiago the new 7.0-inch touchscreen infotainment system that made its debut on the Tigor recently.

Under the hood, the Tiago comes with an 85hp, 1.2-litre petrol and a 70hp, 1.05-litre diesel engine. The former gets either a 5-speed manual or an AMT gearbox while the latter is mated to a 5-speed manual only. Key rivals to the Tiago include the new Hyundai Santro and the Maruti Suzuki Celerio.