We compare the new Tata Tiago iCNG against its peers in terms of specifications and price. 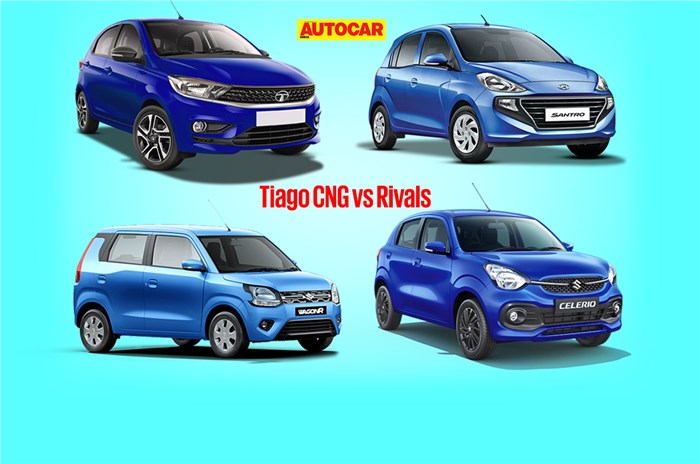 Tata Motors has just re-entered the passenger vehicle CNG space in the Indian market with the introduction of the Tiago iCNG. The hatchback has been launched at Rs 6.10 lakh, with four variants for buyers to choose from.

Being budget hatchbacks, all models here measure comfortably under 4m in length. The Tata Tiago is the longest overall here, at 3,765mm, and is the widest as well, at 1,677mm. However, the Tiago is the shortest in this comparison. Furthermore, the Tiago CNG's boot space is just 80 litres, which is down from 242 litres of the petrol version. This is due to the addition of the CNG tank.

The new Celerio comes second to the Tiago in terms of overall length and width, but the Maruti has the Tata beat when it comes to the wheelbase, which is the largest here.

Thanks to its tall-boy stance, the Wagon R is the tallest here at 1,675mm. It also shares the same 2,435mm wheelbase as the Celerio.

Going by the overall dimensions, the Santro CNG is the smallest package here. The Hyundai is the second tallest competitor here and has the same 2,400mm wheelbase as the Tata.

In terms of wheel sizes, all competitors here, barring the Wagon R, run on 14-inch wheels and tyres.

In terms of the engine, all cars here get three-cylinder, naturally-aspirated units, except the Santro, which gets a four-pot motor. The Tiago CNG’s engine has the highest displacement, at 1.2-litres, and it also has the most output (73hp/95Nm) in this comparison. Interestingly, the Tiago CNG can be started directly in CNG mode, which is a feature not offered by any of its rivals.

The Hyundai Santro, meanwhile, comes second in terms of displacement and output. The two Maruti Suzuki models are closely matched for output, with the Wagon R being more powerful (59hp) and the Celerio being torquier (82Nm). All cars in this comparison come with a 5-speed manual gearbox only.

It’s no surprise that the two Maruti models in this comparison boast of the highest fuel economy numbers. The new Celerio CNG leads the way, returning 35.60km/kg, while the Wagon R is said to do 32.52km/kg. The Hyundai Santro is not far behind, with an official fuel economy rating of 30.48km/kg. The Tiago CNG comes in last place, with a mileage of 26.49km/kg, which is considerably lower than its rivals. However, what the Tiago loses in fuel economy it makes up for by offering the largest engine with the most output here.

The Tiago CNG is priced from Rs 6.10 lakh for the base XE trim, going up to Rs 7.53 lakh for the top-spec XZ+ trim. The Tata’s starting price is identical to that of the Santro CNG and Rs 3,000 cheaper than the Wagon R CNG. At the top end, the Tiago CNG is pricier by more than a lakh compared to its nearest competitor, the Celerio CNG. However, unlike the others, the Tiago CNG is the only one that is offered in four trims, including the top-spec XZ+. Hence, buyers won’t have to compromise on features when opting for the CNG variant over the petrol variant, which is not the case with its competitors. Overall, the Tiago CNG comes across as being priced quite competitively, but it’s worth noting that the prices are introductory and are expected to be hiked in the future.

So, there we have it. That’s how the new Tata Tiago iCNG compares with its rivals on the spec sheet. But how do they fare in the real world? Only an in-depth, on-road comparison will tell us that.

Would you pick the new Tata Tiago iCNG over its competitors? Let us know in the comments section.