All-electric hatchback shown in near-production form at Tata’s stall at the 2020 Auto Expo. 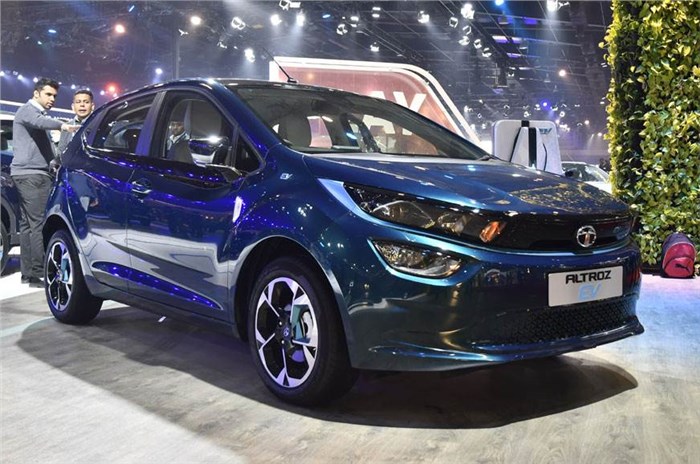 Tata showcased the upcoming, all-electric Altroz hatchback to the Indian audience for the first time at Auto Expo 2020. First revealed alongside the combustion-engine Altroz at the 2019 Geneva motor show, the all-electric Altroz will join Tata’s expanding EV line-up sometime this year.

Certain details differentiate the car seen in Geneva and the close-to-production Altroz EV on display at Auto Expo 2020. Revised front and rear bumpers, new-design alloy wheels with blue highlights, and the repositioning of the badge to the blacked-out section of the tailgate are some of the visual changes. Other design elements, however, such as the closed off-grille and star patterns on the front air dam have been carried over.

The EV’s interior is in line with that of the Altroz on sale. The unique vents seen on the Geneva show car have made way for traditional units, but the blue highlights across the interior and the lighter upholstery are exclusive to the Altroz EV. Also unique to the electric version is a rotary gear selector, though it remains to be seen if the car’s electric parking brake will make production.

Tata Motors did not reveal fresh details about the powertrain, but what we do know is that  the Altroz EV will use Tata’s Ziptron powertrain comprising a permanent magnet AC motor that powers the front wheels via a single-speed gearbox. The Altroz’s lithium-ion battery pack has a ‘target range’ of 250-300km, and can be charged to 80 percent in 60 minutes with DC fast charging.

The Tata Altroz EV is one among the four all-electric models the company plans to launch over the next 24 months, which will also include an all-electric variant of the production micro-SUV based on the HBX concept. Also on display at Tata’s Auto Expo 2020 stand is the recently launched Nexon EV.