Maruti Suzuki also had the Wagon R EV on display along with the hybrid MPV; both have been seen testing on Indian roads. 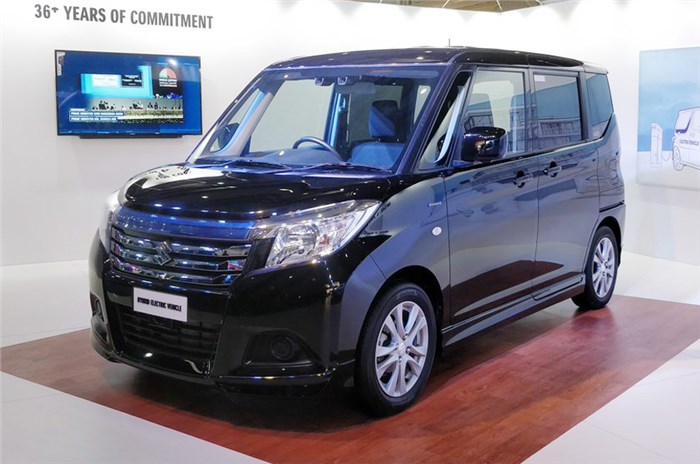 The Future Mobility Show 2019, which took place from February 26-28 in Bengaluru, saw Maruti Suzuki showcase two models, which indicate the steps the brand is taking towards electric mobility. Along with the all-electric Wagon R, the Suzuki Solio hybrid was also on display.

A five-seat MPV, the Solio has been spied testing around Maruti Suzuki’s plant at Manesar, though the car had been trotted out at the 2012 Auto Expo too, albeit in seven-seat form. One of the Suzuki Solio’s USPs is that it gets van-like sliding rear doors, rather than the standard hinge-type. The Solio is a bit bigger than the new-gen Wagon R that launched at the end of January, measuring 3,710mm in length, 1,625mm in width and 1,745mm in height (55mm longer, 5mm wider and 70mm taller). The MPV’s wheelbase is 45mm longer than the Wagon R’s at 2,480mm.

The Solio that was showcased at the event is powered by a petrol-electric combination – Suzuki’s eponymous K12 engine (1.2-litre, four-cylinder) is paired with an electric motor that puts out 13.6hp and 30Nm of torque. Total power and torque output is pegged at 91hp and 118Nm of peak torque. In the Japanese market, this hybrid system sends power to the front wheels via a 5-speed automated manual transmission (AMT). Interestingly, the Solio in Japan also comes with conventional petrol and mild-hybrid petrol engine options and four-wheel-drive on these motors.

There is no news about Maruti Suzuki launching the Solio in India, though the brand is gearing up to bring the all-electric Wagon R to the market by April 2020. The first electric model in India for the manufacturer, the Wagon R EV is expected to come with a real-world range of 130km, get DC fast charging and be priced at about Rs 7 lakh (after subsidies). However, the Solio’s presence on India’s roads indicates that its hybrid powertrain could make its way to a future Maruti Suzuki model – the Japan-spec Suzuki Swift is available with this same hybrid setup.