The fourth-gen Suzuki Jimny has just been showcased for the first time in India at Auto Expo 2020; Maruti to gauge public response. 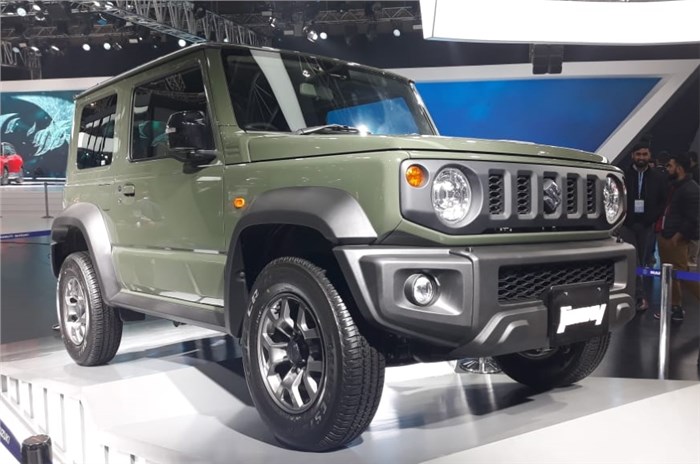 Ever since it was unveiled in mid-2018, the fourth-gen Suzuki Jimny has gone on to become an unlikely sensation in the automotive world. The model has just got its first India showing at Auto Expo 2020, and if the crowds thronging it are anything to go by, there’s massive interest for the small off-roader in our market too.

But before you get your hopes up, you should know that the Jimny is only here for display and is not due for launch any time soon. Maruti says it will gauge public response to the model. In the past, Maruti officials had said, while there is interest in the Jimny, it won’t sell in the numbers they need to make the project commercially viable. A more practical five-door version has been mooted but there’s no official confirmation on the project.

The fourth-gen Jimny sticks to the formula of body-on-frame construction, compact dimensions and a light weight that won the original a fan following in the off-road community. Four-wheel drive is standard and gives the plucky Jimny genuine ability in the rough. The latest model also goes one-up on its utilitarian successors, with creature comforts like a touchscreen infotainment system. The second-gen Jimny was sold in India as the Gypsy till recently and we all know how basic it was in this department.

The Jimny comes powered by Suzuki’s K15B 1.5-litre petrol engine, which is the same unit that powers the Maruti Suzuki Vitara Brezza facelift, Ertiga, XL6 and Ciaz in India, albeit in slightly lower 102hp state of tune; 5-speed manual and 4-speed torque convertor automatic gearboxes are on offer. The Jimny for Japan also gets the option of a 660cc turbo-petrol engine in Suzuki’s home market to comply with small-car regulations.

The Euro-spec Jimny comes with safety kit such as six airbags, ISOFIX child-seat mounts, autonomous emergency braking (AEB), a seat-belt reminder and a lane-assist system, and had received a three-star Euro NCAP rating.

The Suzuki Jimny is only built at the brand’s plant in Kosai, Japan, and is exported all over the world. However, the three-door SUV will soon stop retailing in European markets as the company will not be able to meet stricter European norms for CO2 emissions (coming into effect in 2021) for it.

Aside from the Jimny, Maruti also had on display the Swift Hybrid from Suzuki’s international line-up.