Skoda reveals some of the features that will be seen in its concept at the 2020 Auto Expo. 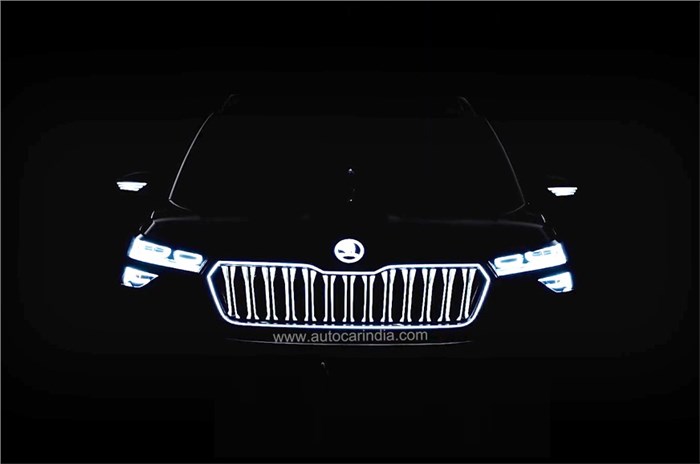 Skoda Auto India has revealed a new set of teasers highlighting fresh details for its upcoming Vision IN SUV concept. It will have a world premiere on February 3, at the upcoming 2020 Auto Expo, and be on display for the general public.

The new teasers reveal that the Skoda Vision IN’s prominent two-slat grille design will get a chrome finish, and the grille itself gets a thick chrome border, just like Skoda's newer global models. The Skoda logo placed above the grille on the concept will feature illumination. The SUV will get split LED headlamps with crystal elements, making it look more upmarket.

On the inside, the concept SUV gets double stitching on the seats, Skoda’s Virtual Cockpit full-digital instrument cluster (also to be seen on the final production-spec SUV), a new-look Skoda multi-function flat-bottom steering wheel with knurled switches and controls for audio and telephony. It will also come with a small gear selector positioned on the central console, and a unique ‘crystalline element’ in the middle of the dashboard.

The new Skoda Vision IN previews a future midsize SUV from the brand that will be built on the heavily localised MQB A0 IN platform. The production-spec SUV will measure around 4.26m in length and will have a wheelbase of around 2,651mm – similar to the Volkswagen T-Cross SUV sold in the South American and Chinese markets.

Under the hood, a 1.0-litre, three-cylinder, turbo-petrol motor and 1.5-litre, four-cylinder turbo-petrol engine will see duty on the production-spec SUV. There will be no diesel engine option on offer with Skoda’s midsize SUV, but a CNG variant may be on the cards.

The production-spec Skoda Vision IN SUV will launch in India sometime between April-June 2021 and will compete with the likes of the next-gen Hyundai Creta, Kia Seltos, MG Hector and Maruti Suzuki’s upcoming midsize SUV – which will also be previewed as the Futuro-E concept at the Auto Expo.

There will be a Volkswagen derivative of the Skoda Vision IN as well. It will be shown at the 2020 Auto Expo as the Volkswagen A0 SUV.